And though most people are aware of the cosmetic skin rejuvenating magic worked by Dr. Tina Venetos and her associates, 70 percent of her patients are introduced to the practice through medical concerns, such as a worrisome looking mole, a rash, eczema, acne, psoriasis, or something like a preventative skin check.

“People should have their skin checked once a year,” says Dr. Venetos.

“I know we want to look good, but, foremost, I am a board certified dermatologist. Making sure that people keep their skin healthy is of the utmost importance to me. Early detection of skin cancer is key for the best outcome.”

Once secure in their skin safety and familiar with the high level of care available at Northshore Dermatology Center, patients sometimes find themselves exploring the menu of revolutionary techniques now available for revitalizing their skin and their appearance non-invasively.

One such service is Neograft, a follicle-by-follicle hair transplantation system for patients with thinning hair. It uses your own hair, it’s scarless, and it looks natural.

“Not only for men,” Dr. Venetos says. “It’s also for women who suffer from female pattern baldness, where they have thin hair on the crown of their head. We also do eyebrows.” 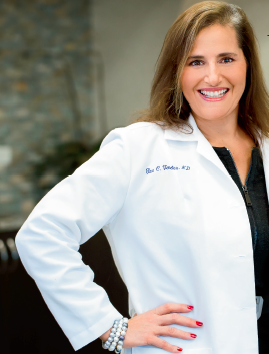 Another technology recently approved by the FDA is the MiraDry system, which uses microwave technology to essentially shrink the sweat glands under the arms to eliminate underarm sweating. As a side benefit, it also significantly reduces underarm hair growth of any color at the same time.

Around the same time as Northshore Dermatology Center opened the Lake Bluff office, they brought in a Picosure laser. Primarily known for tattoo removal, the Picosure system breaks up the ink pigment in the skin and activates the body’s macrophage white blood cells to disperse and remove it. However, the laser has also been FDA approved for treatment of acne scars, brown or red spots on the skin, and even wrinkles, all resulting in a smoother, more even complexion.

The new filler, Bellafill, is also an effective agent for combating acne scars and the deep lines of the nasal labial fold. The thing that separates it from other fillers is its longevity, lasting for up to five years at a time.

A variety of injectables—like Botox, Dysport, and Xeomin, which help smooth and eliminate wrinkles of the forehead and crowsfeet—can be administered at their satellite offices in Wilmette and Libertyville, as well. And they still offer a full range of other cosmetic fillers at every location.

Of course, they still offer CoolSculpting, which targets and freezes persistent fat cells for the body to naturally eliminate over the following months. Patients can get immediately back to their routine, going back to work and exercising the same day as the procedure.

Results are noticeable one month later, but the final result—20 to 40 percent fat loss in the treated area—is visible three to four months after treatment. Scheduling now will have you ready for swimsuit season this year.

The new addition to the CoolSculpting scene is the CoolMini, a handheld attachment used specifically for removing fat underneath the jaw.

The addition of more space at the new office led Northshore Dermatology to offer DualScuplting as well. With two CoolSculpting machines, they can cut down on the procedure time, allowing them to treat two areas at once. Or maximize treatment time by receiving CoolSculpting and MiraDry session simultaneously; a package Dr. Venetos refers to as Cool and Dry.

In addition to all the new services, the new office has allowed Northshore Dermatology Center to expand the number of daily appointments and their hours, even offering evening hours a few times a week and Saturdays.

“By virtue of having more exam rooms, it’s made the flow a lot better,” Dr. Venetos says. “When most dermatologists see moles that look suspicious they say, ‘These need to be removed,’ and they schedule another appointment. I don’t do that. I figure you’re here, you took the time, you’ve already paid your co-pay, and I’ll offer to remove the suspicious moles on that visit.”

It’s nice to know that even when so much is new, some things stay the same. Northshore Dermatology Center still has the same high level of service, same great results, and the same friendly, smiling faces.