Standing in the hallway just outside her office at Gorton Community Center, Brenda Dick—its current executive director—sets her gaze on the beautiful entrance to the John & Nancy Hughes Theater, which was masterfully renovated under her watch. On the heels of the news that she will retire this May after five years at Gorton, an obvious question is: “What’s next?” “Well,” Dick says with a smile and her signature quiet wit, “my husband has made it very clear that he doesn’t want me rearranging his sock drawer.”

Dick came to Gorton in January 2011 at a pivotal juncture, just months after the community center was closed unexpectedly due to monetary constraints. But over the course of Dick’s tenure, Gorton successfully completed a $7 million fundraising campaign. The campaign’s success inspired a variety of new projects and programs beginning with the opening of the John & Nancy Hughes Theater. Partnerships with the Gene Siskel Film Center and Facets have led to showing independent films and Gorton’s involvement in the Chicago International Children’s Film Festival. The transformation of the main hall, the Nagel Family Room, and the Stuart Community Room has resulted in increased fundraisers, private parties, corporate training programs, and musical performances being hosted at Gorton. 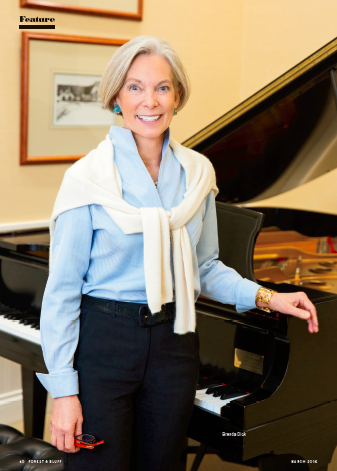 “It was important for us to secure Gorton’s funding [Gorton doesn’t receive money from the City of Lake Forest], transform the building, and create a place where we could be a modern community center,” explains Dick. “And we have put together a vision for the type of programming that people want in the 21st century. That is done. The stage is set. And now we need someone who can build on this and take Gorton to the next level, while encouraging the community to remain engaged.”

The search for Dick’s replacement is currently underway and will be the first line item of business for incoming Gorton Board of Directors Chair, Barrett Davie.

“Brenda has done an incredible job leading this center operationally and in leading the capital campaign. The community came together because Brenda marshalled a whole series of folks to come around to do it,” Davie says. “It will be difficult to replace her because we need someone who recognizes the subtleties and nuances of this community—someone who has vision, knows the constituents, and is local. Brenda is a force of nature who understands this town. She has been a tremendous gift.”

Davie began his tenure at Gorton with Dick and says it’s been one of the most meaningful and exciting organizations he’s had the opportunity to work with. “It’s so interesting that no matter who you talk to, if they’ve spent any time in this community, they have a Gorton story,” says Davie. “Whether you came to the grotto for junior high dances, or your grandmother used to sit on the roof and watch for airplanes during World War II—everyone feels a connection to this place. We have a real opportunity before us. We need to create a connectivity that will transcend this building but always be tethered to it.”

Reflecting on her retirement, Dick can’t help but be sentimental. “Giving back to Gorton has meant a great deal to me and my family,” she says. “Lake Forest is my hometown. It’s where I met my husband John, clapped for our children when they performed on Gorton’s stage, and began 40-year friendships on the beach and at the grocery store. The people of Lake Forest and Lake Bluff put in the time and effort to create that kind of a community and Gorton is right at the heart of it. I’ve loved being a part of it and I’m excited to see what the next five years will bring.”

If you’re interested in applying for the executive director position at Gorton, visit gortoncenter.org.