A lot has to be taken into account when renovating a historic institution like the Deer Path Inn.

“There was a great deal of speculation while we were underway,” says Matt Barba, the general manager of the Deer Path Inn. “I understand the anxiety; everyone has a story. They got married here, their grandmother lived here—every person has a special memory to share about the Deer Path Inn. Since we opened the doors, the reception has been overwhelmingly positive. They appreciate that we preserved the essence of what everybody loved and built upon the best features.” 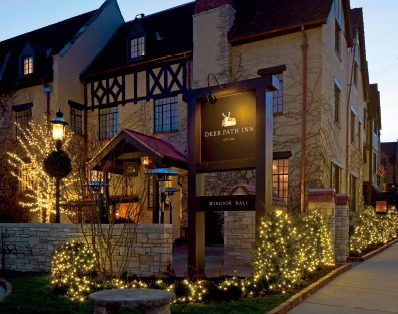 It’s not simply about nostalgia. This is a building on the National Register of Historic Places. Its recognizable exterior, based on a 15th-century Tudor-style manor home in England, could be a postcard for ye olde Lake Forest. It’s housed scores of friends and relatives during special events and celebrities from Paul Newman to Carol Burnett to Bill Murray when their work brought them to town.

But things have changed since the guest rooms were first designed. The attention grabbers then—a bath in each room—had lost their luster, and modern luxury travelers prefer to have handy outlets for charging phones or being able to control the temperature in their room. When Lake Forest Investments acquired the Deer Path in December 2013, it was time to upgrade the guest experience while preserving the historic aspects, excellent dining, and charming appeal of the place. They brought in Charlestowne Hotels, a full service hospitality management company, who manage 38 properties from luxury hotels to resort properties. 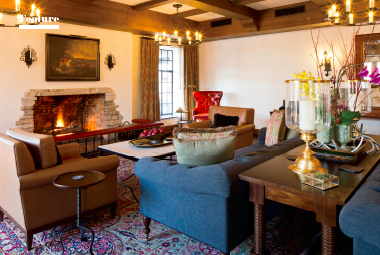 They closed the majority of the property in January last year and architectural firm Knauer Incorporated from Deerfield went to work. The remaining portion of the Inn closed in July, and they reopened just in time for the New Year, with all the modern amenities and a new injection of charm.

Now, the rooms have all stone bathrooms with glass encased shower stalls and fully updated amenities. They have big flat screen TVs, executive desks, electronic safes, high speed internet, and secure data connections. All of these new features also ushered in a 10 to 20 percent bump in the average room rate to reflect a more market appropriate price. But step outside the cozy 21st century amenities and you’re back in the old English luxury of the Deer Path Inn. 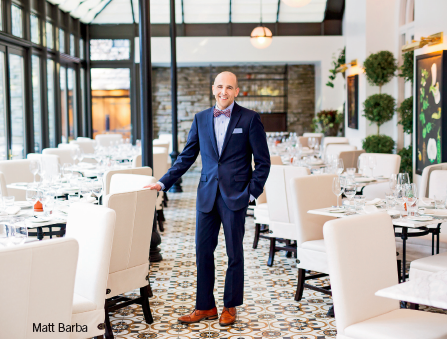 “It was very important for the inn to maintain its character and sense of place, which everyone has grown to love,” says Michael Tall, the President and CEO of Charlestowne Hotels. “The inn has such a rich history within the community, and it was paramount for us to design a space that honors this history while still being able to enhance the overall facility to appeal to today’s discerning traveler.”

All of the public spaces were also spruced up. There’s an elevator for ease of accessibility, more of the classic stonework on the floors, new millwork and furnishings for the Hearth Room, (one of the event spaces) and the English Room (the fine dining space). The subterranean hotspot, The Bar, lost the sushi station (but not the sushi!) and added a few more tables. The White Hart Pub, previously a tiny space tucked between the English Room and The Bar, has doubled in size and capacity. They took the British detailing of the space and really ran with it, adding baublebedecked shelves and an English pub menu to match. Where the dining environments essentially shared a menu before, each space now has its own menu to match its own unique atmosphere.

Perhaps the most noticeable change is a spacious glass conservatory in the Garden Room, really expanding the reach of the fine dining space. 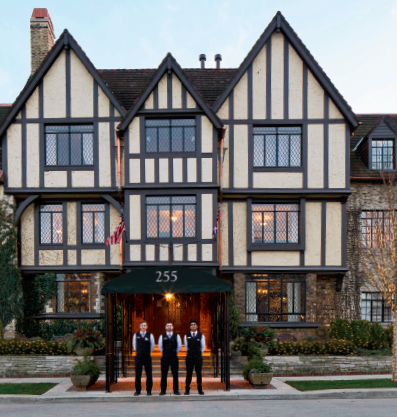 “That’s been the showstopper,” says Barba. “It’s where everybody wants to dine. It connects you with the outside. The courtyard beyond that has been redone as well.”

Refurbished in the same style and with the same materials as were used originally, Lake Forest-based Craig Bergmann Landscape Design redeveloped the courtyard around a new focal point, a bronze statue of a red Scottish stag by artist John Tolmay, and planted material traditional to an English garden of that period.

“I think the most important element to keep in mind when giving a new birth to an old place is to try to be seamless between what was there originally, and what we were adding,” Craig Bergmann says. “We didn’t want to change the character

Bergmann also oversaw the development of the patio space outside of The Bar, adding a fireplace and a stone wall that matches what was already onsite to add a little intimacy to the outdoor dining experience.

“Round 2 will start when the weather gets good and we’ll have a chance to enjoy the outside spaces as well,” says Barba.

Even the rest of this winter, though, they want to make sure people can enjoy their new spaces. In February, they instituted a traditional Afternoon Tea in the English Room, offering the most British of beverages with small sandwiches, scones, and a selection of cakes. Consider this your cordial invitation to find out if you agree with Henry James’s sentiment in Portrait of a Lady: “…there are few hours in life more agreeable than the hour dedicated to the ceremony known as afternoon tea.”

The Deer Path Inn is located at 255 E. Illinois Road in Lake Forest.