It took her seven days to climb the mountain in Africa last summer. Her name is Nina Wilson. The Lake Forest High School senior is a 5 foot-9 hockey player. The mountain’s name is Kilimanjaro, a bit taller, at 19,000 feet.

Before scaling it with other teens on a Moondance Adventure, Wilson, a Chicago Blackhawks fan, packed a Blackhawksthemed sign she had designed.

Wilson followed through on her plan to unpack the sign at the summit and pose for a picture with it. She then tweeted the image to her followers in North America. The Blackhawks, reigning Stanley Cup champions, favorited the tweet.

“Super rewarding, one of the pivotal moments in my life,” Wilson, also a conqueror of Mount Shasta in California, says. “It also was super hard, mentally and physically.” 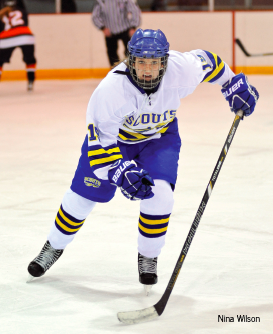 Wilson, along with her Scouts teammates, found herself atop the girls hockey world in Illinois in 2013. Lake Forest reached that height when it defeated Fenwick 2-0 for the state championship at the United Center, home of Wilson’s favorite National Hockey League team. She was a freshman then. She is well into the “third period” of her varsity hockey career this month, a co-captain, a staple on Lake Forest’s special teams, and a cutup around her teammates. It is 30 minutes before a game at Lake Forest College, the Scouts’ home rink. The team’s other co-captain, senior forward Lilly Bianchi, is in the middle of an interview, answering questions about Wilson. Wilson strolls by Bianchi, playfully flicks some cold water at Bianchi’s face, keeps strolling.

“Exhibit A,” a smiling Bianchi, beads of water migrating down the left side of her face, says of Wilson’s fun-loving side. “She makes me laugh multiple times each day. She makes all of us laugh.

On the ice she’s an energy player, excited to be there. Her energy energizes her teammates. There’s nothing subtle about her.”

In 17 games for a 8-5-6 squad, through January 30, Wilson had scored five goals and provided four assists, her most recent tally coming in a 1-1 tie versus reigning state champion Latin School. She also had an impact at the other end of the rink against Latin’s Romans, blocking dangerous shots and clearing others. A late Wilson block preserved the stalemate.

“She is not a huge goal scorer, but she does other things for us, reliable things,” Lake Forest hockey coach Liz Zorn says. “Nina doesn’t have a specialty. I consider her a utility player, valuable on offense and defense, on our power play and penalty kill. She sets up her teammates well, always looking to do that, and she works hard to create turnovers. Her personality—it’s unique, and it’s the best, the kind you want from one of your leaders in the locker room. She has a knack for hockey and a knack for making everybody laugh, coaches included.”

Wilson was five years old, maybe six, when she showed up late for her very first Falcons Hockey Association practice at a rink in Highland Park. Her teammates were all the way at the other end of the rink. Shortly after her blades hit the ice near a rink door, Wilson fell, no laughing matter—except for some of the witnesses. Wilson picked herself up, red face included, and skated toward the group.

“I was mortified,” Wilson recalls. “It got better from there.”

Wilson played for Falcons teams until she was eight and skated for Winter Club boys teams in Lake Forest until she was 12. She dabbled in field hockey, in tennis, in other sports. None generated the kind of thrills that ice hockey had. Ice hockey was fast and tough and mountain-climbing exciting. Wilson stuck with ice hockey. It developed her communication and leadership skills. It gave her opportunities to enjoy team dynamics, the serious kind and the not-so-serious kind. See Nina Wilson control the puck and pass the puck. See and hear Nina Wilson crack up an entire bench of Scouts.

“Nina is spunky, quirky, fun,” Scouts forward Marissa Garapolo, a Libertyville High School senior, says. “She lets players know what she’s thinking. She can get under your skin, but she does it in a loving way, the way a big brother gets under the skin of his little sister. In games you don’t just see her drive, her hustle, her determination to dig, to keep digging for a loose puck; you also see how happy she is to be on the ice and playing a sport she loves.”

Back in 2013, Lake Forest’s state championship season, Wilson and her teammates toured the Chicago Blackhawks’ locker room at the United Center and watched the Blackhawks practice.

Wilson got to see her favorite Blackhawk, Jonathan Toews, also a captain, also an effective two-way player. Her heart must have raced. Her goosebumps must have swelled into Volkswagen Beetle dimensions.

Her excitement level must have reached a personal-best height, climbing gear unnecessary.