We caught up with Lake Bluff native Justin Peters during his book tour for The Idealist: Aaron Swartz and the Rise of Free Culture on the Internet. He suggested Scooter’s in Lake Bluff for lunch because, “Scooter’s is the best. For a long time, it was also the only. Now that it’s no longer the only, it’s still the best.”

It’s been a crazy year and a half for Peters. In October 2014, he competed as a very outspoken contestant on Who Wants to Be a Millionaire, getting to the second-to-last question before losing $225,000 with a shrug and a guess. He spent a good portion of last year traveling the country, performing shows in 20 states as one half of the improv-comedy duo “From Justin to Kelly.” In July 2015, Millionaire invited him back for its first ever “second chances” week. And just two months ago, publisher Simon & Schuster finally released the book he’d been researching and writing for two years.

It started as a story for the online magazine Slate about 26-year-old Aaron Swartz, a young man raised in Highland Park who committed suicide after two years of prosecution by the federal government for illegally downloading millions of scholarly articles from a non-profit online catalog. A passionate advocate on behalf of “free culture” on the Internet, he was very vocal about the immorality of keeping public information out of the hands of people for the sake of private profit. When Peters was approached to turn his 15,000-word piece into a book, he decided to flesh it out by exploring the history of copyright laws and the colorful personalities over the last 150 years who made it their personal mission to champion or deride them. 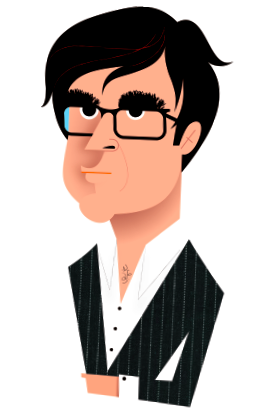 “There are a lot of publishers who would have said, ‘Whoa, we hired you to write a book about Aaron Swartz, not all this other stuff,’” says Peters. “But I’ve always loved digging into history and seeing how it helps explain the present day.

The more I learned about the history of copyright in this country and the weird individuals involved with it, the better I understood our current moment.”

Peters also injects a lot of his comedic personal outlook into the book through frequent asides that keep the story modern and engaging.

“I made my reputation, such as it is, writing dumb stories of me humiliating myself on purpose,” Peters says. “The story I was most known for before this was me wearing adult diapers to the Democratic National Convention in 2008. So, the path from there to writing this long, complicated book about Aaron Swartz and intellectual property… I don’t know if I could retrace my steps if I tried.”

Even if he doesn’t know how he got there, the book is fascinating, amusing, reflective, and sorrowful. He treats the story of one young man’s tragic path with the gravity it deserves, but allows the circus of politicizing and pirating creativity to be broadly amusing. His timing is also impeccable, the issue of protecting copyright has rarely been more relevant as the giant industries that have arisen around packaging creative material publicly grapple with Internet piracy.

“Maybe this notion that you’re going to become insanely rich through your creative work is sort of a historical aberration that’s just a function of power consolidating in the hands of major labels and studios,” Peters says. “For every person who became mega-rich through creativity, there are hundreds of thousands who couldn’t get in the door because they didn’t fit the mold. The Internet creates an idea of access that didn’t exist before. I think that’s great.”

After discussing the ins and outs of copyright all lunch, I wanted to close our interview with the real hard-hitting question: Which job is more fun, author or Millionaire contestant?