Kraig Moreland and Rory Shutler have been around Lake Bluff for most of their lives with their paths crossing a number of times. The two men, 11 years apart in age, had no idea how connected they were until December.

A onetime board member of the Lake Bluff History Museum and an active volunteer, Moreland is passionate about the former Lake Bluff Children’s Home, an orphanage that housed children from 1894 to 1969, placing many with adoptive families.

The home, bounded by Scranton, North, Gurney and Evanston Avenues near downtown Lake Bluff, was near Moreland’s boyhood home. He said it was demolished in 1979 after housing children from Arden Shore during its last 10 years. Some of the occupants were his boyhood playmates.

“They were local kids,” Moreland says. “We’d play ball with them in the park. We’d go there on Sunday and hang out. We all played together. We went to school together. They were part of our community.”

After producing a feature-length documentary about the children’s home called A Childhood Lost & Found five years ago, Moreland has become adept at helping people find their roots.

“Not only are people interested, it’s snowballing,” Moreland says. “I get a call or an email every month, sometimes two. I think ancestry.com has had a lot to do with it. Often times it is for medical reasons.”

Shutler, who came to the home as an infant and was adopted by a Lake Bluff family shortly thereafter, is one of the people Moreland connected. Now 62 and a Waukegan resident, Shutler has been the building supervisor for Grace United Methodist Church in Lake Bluff for 40 years. 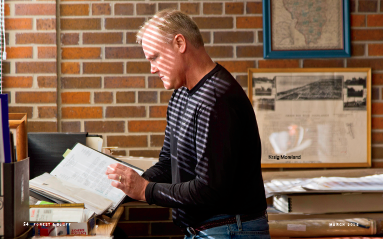 Last August, Shutler said he started working with Jami Considine, the church’s administrative assistant, to learn more about his birth parents. He said he wanted to learn his medical history as he was getting older. They were making little progress when Considine went to Moreland.

“Kraig (Moreland) was incredible, he was a Superman,” Considine says. “He was able to get Rory’s birth certificate in a few days.”

After Considine introduced Shutler to Moreland, he took a strong personal interest. Moreland said he not only remembered Shutler growing up, there was more as Moreland started to investigate.

“I knew him my whole life,” Moreland says. “His birth mother was a schoolmate of my father at Bowen High School in Chicago.”

Though Shutler learned his mother died of breast cancer at 48, Moreland’s investigative work revealed the mother’s sister was still alive. Moreland connected Shutler with her. From her, Shutler learned his birth father was alive and he had half siblings.

“She texted me a picture of my birth mother,” Shutler says of his birth aunt. “My (birth father) sent me an email,” he adds, saying he doubted there would be a meeting. He considers his adoptive parents his family. He did get medical information on birth relatives with a lot of cancer history.

“I got medical stuff,” Shutler adds. “It was very helpful. I wish I had it two years ago. I’m happy I know now.”

By day, Moreland runs the New Vision Athletics (NVA) youth sports program in Lake Forest and Lake Bluff; he volunteers for the museum, creates films in his spare time, and has had a lot of experiences connecting people to their Lake Bluff pasts since the documentary premiered. Many of the stories are like Shutler’s, with birth parents unable to care for a child after pregnancy occurred and placing the baby for adoption.

Since Moreland got involved helping connect people to their past, he has become adept at learning the current laws and uncovering the secrets behind an adoptive birth certificate.

Since most of the children at the home were from the Chicago area, he says it makes the sleuthing easier. He also said he gets a lot of satisfaction assisting others.

“It’s fun to be able to play detective and help people,” Moreland says. “This is gratifying. It’s powerful.”

This story originally was published on DailyNorthShore.com on February 3, 2016.