Lake Forest Country Day School prepares children for the transition from middle school to higher education and the life that waits beyond it.

The goals set for children in elementary and middle school have moved far beyond the basics of reading, writing, and arithmetic. At Lake Forest Country Day School (LFCDS), where young minds are shaped from pre-K through 8th grade, it’s not simply about memorizing facts or knowing which circle to fill in on a multiple choice test.

They shape the way each student interacts with learning and communicating information.

“The world has fundamentally changed,” says Bob Whelan, Head of School at LFCDS. “When I was in elementary school, the smartest kid in the room was the one who had the most facts. 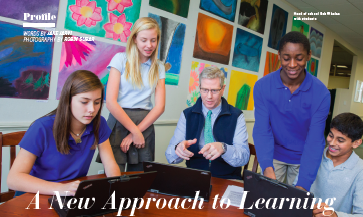 With the advent of the Internet, everybody has access to all the information you could ever hope for. The real question is what do you do with that? How do you curate that? How do you become a responsible problem solver?”

One such method for helping their students think critically is the Singapore Math program, which was adopted several years ago at LFCDS. The approach is centered in a concrete-pictorial abstract approach, which is highly visual and hands-on so that students don’t merely receive formulas for producing answers but a methodology for approaching problems in a variety of ways that also aligns with the National Council of Teachers of Mathematics and Common Core State Standards. That way they’re not just getting a series of study guides, but an ingrained ability to navigate problems throughout their lifetimes.

“Singapore Math is a good example, but we work very early on trying to do several things,” says Whelan. “One is developing a toolkit of very transferable skills. Can somebody communicate an idea effectively through oral and written expression? And can they work collaboratively, because so much of what they’ll do in high school, in college, and professionally will depend on working as part of a team. Are they kids of character? It’s not enough to be able to do the math, what are you like as a person? Are people going to want to be around you?”

LFCDS offers students the opportunity to work as a team on a variety of interesting projects, like its LEGO robotics program where teams of students design, engineer, and build robots from LEGO robotics kits to compete in worldwide FIRST LEGO League tournaments.

Students can further explore a variety of creative pursuits in the LFCDS Innovation Lab, where the emphasis is on a STEM+ (Science, Technology, Engineering, Math, plus other related disciplines) curriculum in a very hands-on manner. This is the area where children have access to tools for building projects, like C02 dragsters and balsa wood house models; a 3D printer; and film software and equipment, including a green screen.

“It comes down to three things: relationship, relevance, and rigor,” says Whelan, outlining the three R’s of modern education.

“We are very fortunate to have this amazing space and teachers for whom education is a calling, not a job. Then you have kids who are excited to come to school. As an independent school, our teachers have the flexibility to say, ‘I want to teach ratio and proportion in mathematics using fantasy football.’ It winds up being a stunning delivery system, because if you can make learning relevant to kids who feel known and understood, the world is your oyster.”