For one teenager, the desire to volunteer has outweighed anything else.

Sean Guigli wants you to know that he won’t change diapers.

But the 16-year-old, an award-winning volunteer at the Gorton Community Center’s Children’s Drop-In Center, is open to doing anything else. That includes toweling down the playground after a rainstorm; or, in the winter, chipping off the ice. It includes being another set of eyes in the classroom, helping in the office, preparing snacks, and playing with the kids, ages 2 to 3 years old, at the Gorton’s “home away from home.”

“He’s never said no to something we’ve asked him to do,” says Kristy Richardson, Director of the Gorton Children’s Drop-In Center. “Over the last year, he’s improved so much because he’s able to interact with the children better now, and he knows when to step in when things get a little crazy.”

On a recent overcast morning I sat down with Sean and his mother, Stefany Guigli, at the Starbucks off Market Square in Lake Forest. Light jazz music played over the speakers as people worked and talked around us.

“He’s not going to sit here and tell you how amazing he is,” Stefany says.

Uh oh, I thought to myself. There goes my story. But gradually the story unfolded, about how a much younger Sean decided to get into volunteering in the first place.

At a time when most kids are eager to shirk from doing homework—let alone any form of work—for the welcoming glow of video games or TV, Sean wanted to know how he could help out. Naturally, he had always felt drawn to an inclination of helping others. He saw volunteering as “a great opportunity to get myself involved in the community more,” says Sean. 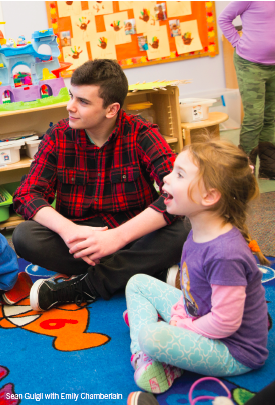 That started with responding to an email, calling all young volunteers to come out for the Gorton’s Safety Town Camp, an interactive safety awareness program for children ages 5 to 7 years old. Sean was put on a waiting list. When he was eventually chosen, he realized that most of the other volunteers were older teenagers. He was 13.

From there, Sean became familiar with Gorton, and sought a more frequent volunteering role. When he eventually found his way to the Children’s Drop-In Center, he started out by volunteering three times a week.

As the years went by, “I started having a lot more responsibility,” says Sean. “The teachers have a busy classroom and I help with many jobs in and out of the room—like doing the laundry, making sure the kids get the information they need in their lockers, and helping the kids play outdoors. I keep an eye out for whoever needs a little more attention.”

Earlier this year, Sean was promoted to a permanent role as an intern. Three years under his belt means he’s been present to see some of the kids—infants, really—grow up. “It’s actually kind of weird,” he says. And the kids he looks after see him as an older brother.

“We mostly have him with the 2 and 3-year-olds [now], which is a very busy group and they have a lot of needs,” adds Richardson. “I think it’s really awesome to have a kid his age, a male especially, in the classroom for the boys to look up to. It’s a pretty female- dominated field, and we just love having him here and having that presence for the children to see a positive role model in Sean.”

Sean isn’t sure if he wants to become a teacher—he’s not too worried with thinking about it now—but the volunteering spirit is certainly there, wherever that might lead him next. “I like helping people, in any situation,” Sean says.