Jake Marwede was on a pier on North Captiva Island, Florida, surrounded by his parents and siblings a couple of years ago. He was fishing. He felt something. His fishing pole, formerly an inanimate object, suddenly became animated.

A battle ensued, starring a Loyola Academy football player from Lake Forest and a seven-foot lemon shark, a Rambler vs. a predator. It lasted 10 minutes, 20 minutes, 25 minutes. It ended, finally, after 30 minutes.

“I started feeling it [pain], in my back and my arms, at the 20-minute mark,” Marwede, a junior tight end-wide receiver, recalls. Marwede won the taut battle. The shark, later, settled for a “tie.” Marwede released it.

College football coaches in charge of big-time programs are holding poles now, hoping to lure and land a certain 6-foot-5, 230-pound Rambler. Marwede, in mid-December, had received more than 10 Division-I scholarship offers. Coaches at the University of Arkansas want Marwede to catch passes and run over linebackers and defensive backs in Southeastern Conference games. Northwestern University and the University of Nebraska covet Marwede, blessed with strength, speed, athleticism, 10.5-inch hands, and an ego smaller than a house dust mite. Other suitors include Indiana University and Iowa State University.

Those hands of his, they’re huge, Hamburger Helper-huge. Jake is 20-30 pounds away from having an NFL body type.” 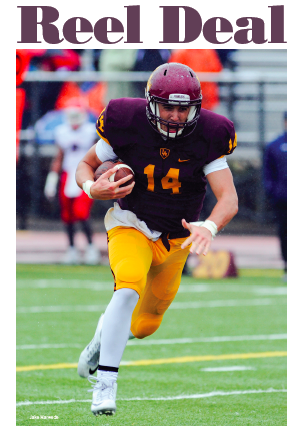 Heavy words, realistic words. Marwede, miles away from his tackle box, helped Loyola Academy (14-0) capture the program’s second state championship in program history in November, rushing for a pair of short touchdowns—as an integral member of the Ramblers’ short-yardage “Big Package” formation—and reeling in four balls for a team-high 83 receiving yards in a 41-0 rout of Marist High School for the Class 8A title in DeKalb.

Alumni will talk about his memorable touchdown grab in a frigid 2015 state semifinal, against Palatine High School, at Marwede’s Loyola Academy reunions. Probably at Palatine High School reunions, too. Planted near a corner of an end zone and matched against a soon-to-be-stunned defensive back, Marwede soared to seize a jump-ball pass. Marwede’s massive hands, inside white gloves, enveloped most of the ball, only one tip of the pigskin exposed as he returned to turf, ball still held well above his head. Marvelous. Clutch. The defensive back had appeared to be attached to Marwede throughout the sequence. Marwede had made a difficult play look easy, too easy.

Marwede averaged 5.6 yards per carry and 14.2 yards per catch for the state champs, entering an end zone nine times, eight via a rush. The number of times he complained about his spot on the quarterback depth chart: 0.

“So big, so strong, so athletic, so skilled,” Ramblers senior quarterback Emmett Clifford says of Marwede, the son of Andy, a former tight end at Yale University, and Brenda, a former tennis player at Lake Forest College, and the brother of Lake Forest High School senior Hannah (a University of Miami, Florida, soccer recruit) and LFHS freshman Hope (a rower). “With the ball in his hands, anywhere near an end zone, nobody could stop him. He’d run hard, hit a defensive player or two, fall in for a score. Some of the catches he made for us … amazing, unbelievable. Nobody could cover him.

“Quiet kid,” Clifford adds. “Nice kid, funny kid.” Marwede started his football life, at the age of six, at New Vision Athletics in Lake Bluff. Youth football coaches put him at quarterback, along the offensive line, in the defensive backfield, at linebacker, everywhere, their Jake of all positions more than happy to play and dominate wherever he was needed. He played baseball, mostly as a third baseman, until the sixth grade. He played basketball until the eighth grade, once throwing down a dunk—as a 6-foot-1 power forward—in a game for Deer Path Middle School. He entered Loyola Academy in Wilmette as a football player, only a football player. On the fifth play of his prep career, as the starting quarterback for the freshman team, Marwede’s right wrist lost a violent clash with an opposing player’s helmet. The helmet broke the wrist. Marwede is righthanded.

Marwede’s season was over, just like that. Holecek promoted Marwede to the varsity at the end of the next season.

The backup to quarterback Aidan Walsh, Marwede handled a few snaps in a playoff game.

Marwede intends to gain 15 pounds before the start of his senior season, putting him at an unstoppable, uncoverable 245 pounds. By then he probably will have received 15 more scholarship offers, at least, from big-time colleges. His reaction to all of the attention, to all of the praise for Jake Marwede he reads and hears, is an aw-shucks smile, followed by a head shake, followed by a look down.

“It’s been exciting, learning about the colleges interested in me, getting to know college coaches, going through the process,” Marwede, fisherman/gridder/good guy, says. “Right now I’m thankful for attending a school with a great atmosphere and being able to play football for the best coaches in the state. Our coaches work hard, and winning that state title was well-deserved.”