A quick overview of the average turnout at a suicide survivor’s support group such as LOSS (Loving Outreach to Survivors of Suicide, developed by Catholic Charities) would show the ratio of women to men averaging 10 to 3.

“Most support groups are populated by the female gender,” says Bruce Engle, a licensed clinical social worker focused on suicide grief support. “Women are much more likely to seek help than men are, particularly in the area of mental health. There’s a cultural reluctance from men to join support groups. That’s the way they’re trained.”

After Bill Teskoski of Lake Forest lost his teenage son to suicide, attending LOSS meetings helped him through the initial stages of dealing with his grief. He saw firsthand how few men attended the co-ed support groups and discovered the need for a safe and confidential space solely for men to discuss their personal experiences after losing a family member or loved one to suicide. That was the foundation for organizing MASS (Men Are Suicide Survivors).

“Everyone speaks from their own experience,” says Teskoski. “We’re all at a different time down the road from our loss. I’m here four years out now, but other people are a year out. It’s different. When it’s that close and that raw, the pain is unbearable. We provide an environment where everyone in the room understands the pain they’re going through.”

MASS follows the model LOSS developed for creating a space of understanding, where everyone in the room has lost someone close to them to suicide. In the LOSS model even those moderating the group are survivors, including the two facilitators and Engle, who serves as the group’s licensed therapist.

“For every suicide, there are eight to 12 survivors who have to deal with the aftermath,” Engle says. “The psychological pain that a survivor experiences is just phenomenal. I’m a grandfather now and I lost my mom when I was a young boy. I’m still not over it. I’m leading a good, happy, positive life, but it’s something you never get over. You have to go through that grief process.” 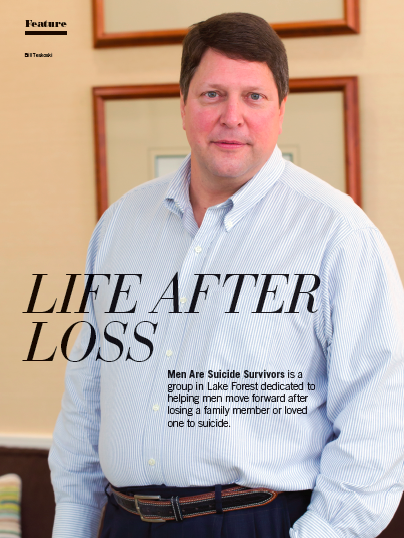 The loss of someone close to suicide is a specific kind of grief. Anyone who’s ever mourned understands the open hole in your life where the person who’s passed is supposed to fit. There’s numbness, shock, and confusion that comes with losing anyone close to you, be it natural causes or a sudden accident. The Mayo Clinic outlines several other stages associated with losing a loved one to suicide. Anger toward the person who took their own life and the feeling it will always be unresolved. Guilt, as if the survivor should have anticipated this outcome and been able to prevent it. The specific confusion of trying to understand what led to this and what their loved one was going through. And rejection, as if suicide was the avenue their family member chose to remove themselves specifically from the relationship they shared with the person grieving.

“We all experience the situation differently,” Engle says. “We all talk from our own perspective. It’s not a teaching situation. We’re not instructing people, but the pain that they’re experiencing is a similar pain. They’ve all experienced losing someone in this tragic way. Everybody in that room cares. The important thing is to come to terms with this reality and accept it. Not accept or agree with what they did, but that this is a reality that happened to us. I didn’t ask for it, but it happened to me. Life can still be a pleasant experience even though this happened.”

The new life on the other side of a suicide isn’t solely about the relationship between the survivor and the person they lost. Every suicide reframes a survivor’s relationship with their community as their friends and neighbors try to understand what they’re going through and that process can feel incredibly isolating.

“Now, you’re in a whole new world where people are not sure how to treat you. You’re ‘that guy,’” Teskoski says. “People want to be supportive, but they don’t really know how, which is understandable. During those initial years, you’re learning how to cope with situations that you didn’t sign up for but that you’re now in the midst of. That’s what a lot of people find comforting about sitting down with others that have experienced the same thing.”

Men Are Suicide Survivors meets at Gorton Community Center every other month for any man 16 years and older who’s lost someone to suicide. There is no fee for attending and no obligation to share your personal experience until you are ready.

Many choose to experience their first MASS meeting by simply listening to the experiences of the other survivors in attendance. The group is not specifically faith-based; any and all are welcome. LOSS through Catholic Charities offers suicide survivor support programs for men and women of all ages throughout the Chicago area, including programs specifically for children, young adults, adults, those who’ve lost spouses, and those who’ve lost siblings.