One late afternoon in Jacksonville, Florida, Wendy Franzen and her sister were exploring one of their favorite past times—vintage store shopping.

“We were walking around this store and it was pretty junky,” remembers Wendy. “And then this [Hermès] Birkin bag caught my eye. It was so much better than anything else they had in the shop that I had to ask if they had anything else like it.” Much to Wendy’s delight, she learned that the owner kept the “good stuff” upstairs. The trouble was, it could only be seen by appointment.

After a little cajoling, Wendy and her sister convinced the owner to make an exception. They then spent the next two hours trying things on—making it very worth the store’s while when they left with armfuls of goodies later. “We later found out that all of these beautiful clothes—and that bag I wish I bought—had belonged to a former editor of Town & Country. All I could think about afterwards was that I had to find a way to share this wild story”

With a little push from her sister, Wendy began writing the blog that she had thought about writing for as long as she could remember. It was a natural evolution for Wendy, who built a career finding treasures for others—first as an associate at Leslie Hindman Auctioneers and then as a personal shopper. Called “The Aesthete and the Dilettante,” “aesthete” meaning a person who has great appreciation for art and beauty and “dilettante” referring to a person who cultivates an area of interest, Wendy writes several entries each month about the things she loves most—be it travel, food, fashion, or culture. As if the subjects and words weren’t inviting enough, each story is detailed with gorgeous photographs Wendy takes herself. 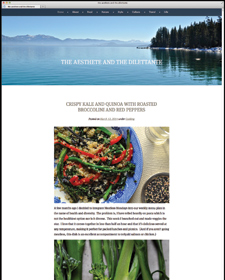 “I hope when people read the blog, they understand my intent,” she explains modestly. “When I see something beautiful or I make a connection, my first inclination is to want to share it with others. The Aesthete and the Dilettante allows me to do that in a creative and thoughtful way.”

One of the most moving entries in Wendy’s blog is from June 2012 called “Gratitude.” It documents Wendy’s first triathlon: “…decided to focus on the overwhelming gratitude I have for my family’s cheers and support. I am tremendously grateful for the journey. There were many lessons learned from the day I decided to register to the moment I crossed the finish line….”

Wendy’s personal flair for fashion and design translate elegantly in her work. “I call my style ‘collected,’” she explains, showing how one can marry the polar concepts of effortlessness and intention into a seamless aesthetic. “Look at that picture,” Wendy says pointing to a small, stark painting hanging over her living room fireplace. “I know that from a design perspective that painting is much too small for that space,” she says. “But I just love it—the horse. That lonely tree. The painting is where it belongs.”

Now in its second year, Wendy has had more than 33,000 views of her blog. “I’m really proud of what it’s become,” she says, recounting the excitement she feels knowing her blog is being read around the world. But she does admit that people still scratch their heads when it comes to its title. “My friends do give me a hard time about it,” she says with a laugh. “Is it a good title if people have to look up what it means? I don’t know. But they do agree that once they know what aesthete and dilettante stands for—it makes perfect sense.”