The show’s title makes reference to the women who would marry doomed G.I.’s to receive their life insurance policies. There is, indeed, plenty of marriage and death occurring here. Taking place at an officer’s pub in 1944, Allotment Annie deals with the quick romance of hesitant bartender Fran and sweet pilot, Joe. While Fran seems to innocently support the cheating, oft-married Virginia, her saucy co-worker, she may not be as pure as she seems. 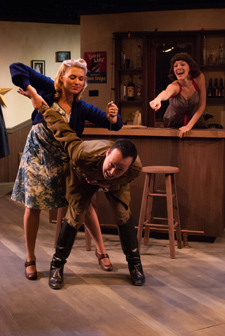 Quickly adopting a profiteering scheme with the willing Joe, Fran soon reveals a darker side. When the first act closes with a betrayal, fueled by shocking violence, dangerous emotions and past criminal acts are soon laid bare.Playwright Mark Mason works with a twisted sense of layered drama and reams of poetic dialogue. Despite the fact that some of his initial character monologues are a bit too heavy handed, one looks forward to an exciting conclusion. Unfortunately, the second act is bogged down with convoluted plotting and odd confrontations that muddy the characters’ motivations. The reveal that Virginia is an honest believer in the reality of love is a nice touch, but Fran’s through line is lost. This makes for an interesting but not entirely successful theatrical experience.

The show’s tone is also damaged by the relentlessly bright lighting scheme and the use of swing music and dancing. An interesting concept and the raison de arte of InFusion, this lighthearted background is ultimately too grand a departure from the show’s melodramatic tone. The overwrought films of Joan Crawford and Bette Davis worked due to their atmosphere. Without the gothic shadows and pretentious mood to accompany it, the show seems a bit adrift. 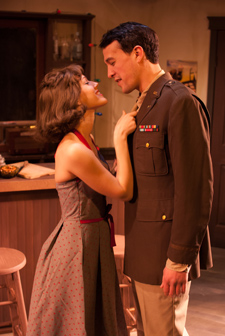 Still, director Bridgette Harney works marvels with her compelling cast. As Fran, Kate Black-Spence is a revelation. She layers her character with subtle shifts and she is always completely fascinating to watch. Amy Rapp’s Virginia is delicate and brazen at once while Mallory Nees, as a ghost from Fran’s past, brings an odd and delightful presence to the proceedings. As Joe, Carl Lindberg offers up a truly genuine presence while Beau Forbes and CJ Langdon round out the cast with wit and grace, as well.

Allotment Annie runs through February 3rd at Strawdog Theatre, 3829 N. Broadway. Tickets are $25 and can be purchased by calling 773-528-9696 or by visiting www.infusiontheatre.com.

Meanwhile, as a new year of truly exciting theater begins, let’s take a look back at 2012 and highlights its best.

Best Actress – Lisa Herceg: Susan Swayne and the Bewildered Bride, Babes with Blades – The always powerful and eclectic Herceg appears next in the Stage Left/Bo Ho collaboration of Pygmalion –     http://stagelefttheatre.com.

Best Actor – Kaelan Strouse: The Vortex, Dead Writer’s Theatre Collective. Giving a haughty yet damaged performance in this Noel Coward piece, Strouse is sure to have an epic year. Keep up with him at  www.kaelanstrouse.com  and www.deadwriters.net.

Best Supporting Actress –  C. Jaye Miller: You Never Can Tell, Remy Bumppo.  Miller was  charming and deliciously fun in this Shaw comedy and can be seen next with www.adapttheatre.com.

Best Supporting Actor – Nick Horst: Tea and Sympathy, The Artistic Home –Horst brought a charm and sensitivity to his athletic school boy in this modern classic and his future projects can be found at  www.theartistichome.org.

Best Director/Best Drama – Lia D. Mortensen  and The Quality of Life, The Den Theatre. This show matched humor with tears as it explored the art of life and dying. Den is currently running its moody revival of Faith Healer – www.dentheatre.com.

Best Musical – A Catered Affair, Porchlight Music Theatre . Porchlight is devoted to musical theatre and this show was among its best. Keep up with their future offerings at www.porchlightmusictheatre.org. 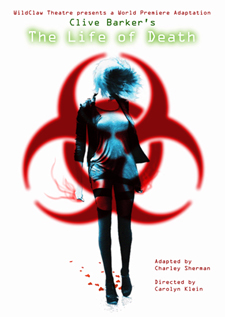 Best Ensemble – The Life of Death, WildClaw Theatre. This moody Clive Barker piece presented superb work from Casey Cunningham, Michaela Petro, Brian Amedei, Mallory Nees and the entire company. Working together they created a haunting delight ,WildClaw’s forte. Be sure to dive into their 2013 gothic wave at www.wildclawtheatre.com.