In late 2009, Craig Bergmann, a landscape architect, was approached by a waste disposal company to buy his nursery in Winthrop Harbor. At first, Craig turned down the proposal, only to have the company make him an offer he couldn’t refuse, leaving Craig to find a new location for his nursery.

While combing the North Shore for land that would be suitable to build a new nursery, Craig and Paul Klug—an interior designer—revisited a listing for what had once been the A. Watson Armour estate in the early 1900s. Designed by David Adler, 900 (the name of the estate) consisted of three main buildings—a coach house and two gate houses. While the Armours originally intended to build a mansion, they abandoned those plans when they discovered how comfortable the gate houses were to live in.

With creative and knowing eyes, and 30 years of experience telling them to trust their instincts, Craig and Paul decided to convert the coach house into a design center for Craig’s company. “For very practical reasons, it was important for me to become ensconced first to justify this whole purchase,” explains Craig. After receiving special permission from the City of Lake Forest to open a business on property zoned only for residences, simultaneous construction began on the coach house, East House (where Paul’s office is currently located and the two live), and the display gardens that now elegantly frame the property.

“These buildings were all but abandoned when we bought them,” says Paul, showing how severe water damage partially destroyed the floors and ceilings in both the East and West Houses. In talking with him, you quickly realize that renovating these buildings means more to him than creating a livable space. “With everything we do, we never want to forget the historical significance this property has to Lake Forest and to the families who once lived here,” he says. 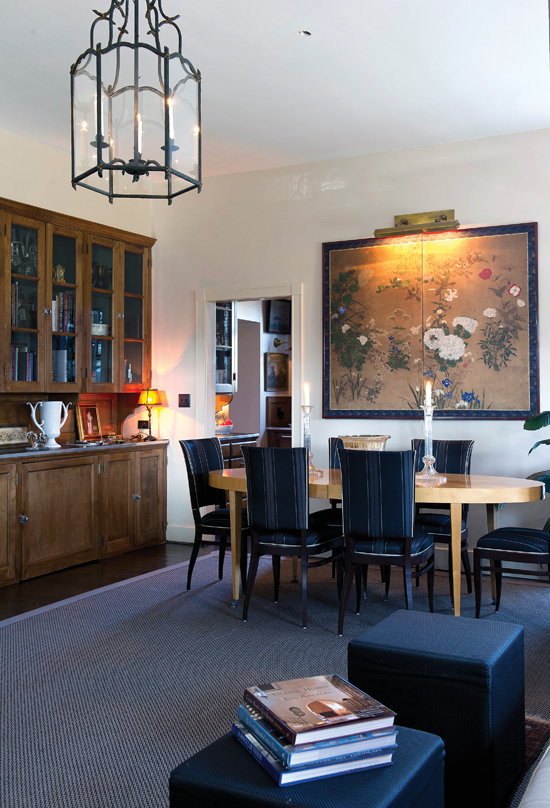 With this sensibility, Craig and Paul have done their best to retrofit original cabinetry and fixtures to maintain the spirit of the home. While the East House is currently furnished with the décor that once filled Paul’s chic Lakeshore Drive condo, they look to historical photos the descendants of the Armour and Carroll families have shared with them for inspiration. “We believe we’re breathing new life into these old buildings,” Craig says, pointing out an iron lantern in one of the coach house’s stairwells that was salvaged from Barat College when it was dismantled years ago. “This home deserves our respect,” adds Craig.

Perhaps even more impressive than the extensive renovation done to the buildings is the rebirth that’s taken place in the landscape surrounding them. When Craig sold his Winthrop Harbor nursery, a number of his plants needed a new home. Over the course of several months, Craig and his team took on the monumental task of transplanting fully grown trees, espaliered apples, old roses, and thousands of perennials to create the current display gardens.

“The gardens have several purposes,” says Craig.  “First, to provide a beautiful outdoor space. Second, when we’re meeting with clients, we can actually take them outside, stand them in the gardens, show them various flowers, and give them a sense of size and dimension for the landscape we’re designing,” Craig adds.

While the gardens offer many breathtaking vignettes, the real showstopper is the pool Craig and Paul added to the property. Just outside the West House sits this peaceful oasis, surrounded by a patio and pergola that rivals any of the area country clubs.

“We didn’t want our home to always be in the shadow of our business,” explains Craig, who has 11 employees currently working at the design center. “Because we live and work virtually in the same space, it would be very easy to lose ourselves to work if we weren’t careful.”

The renovation of 900 and its adjacent landscape has been undeniably a labor of love for Craig and Paul. “We could never have accomplished all that we have these last 18 months without the other,” says Craig of his partnership with Paul. And while at times they may be exhausted at the mere thought of the work that’s still ahead, they never lose their enthusiasm for the masterpiece—and historical tribute to Lake Forest—they’re creating.

To learn more about the renovation of 900, visit craigbergmann.com or paulkluginc.com.