Dr. Lon Mellijor and his wife Linda have been avid art collectors for more than 20 years. From sculptures to paintings and pencil drawings, tapestries and taxidermy, their appreciation of an artist’s ability to capture the vibrancy of life led to an impressive collection that they were forced to keep in storage, as they didn’t have the space for it in their house in Winthrop Harbor. In 2005, they finally found a home in Lake Forest that could contain their collection in grand fashion, but they also built a studio on the property, where the artists they have come to support over the years can stay and work whenever they’re in town.

“We buy everything straight from the artists,” says Linda. “We’ve tracked artists down for four years before we’ve bought a piece. It’s become part of the fun of it.”

The Lake Forest home is called Casa del Sol y Luna, after the 16-foot bronze statue by artist Jerry McKellar in the center of the driveway called “Dance of the Sun and the Moon.” The statue evokes a Native American legend about the overwhelming power of love and sets the theme for the rest of the front yard statuary. Works by sculptor James Muir, such as “The Dance” and “The Lighted Lantern,” are a celebration of marriage, and a bronze vignette by the property line depicts an elderly couple spending time with their grandchild. 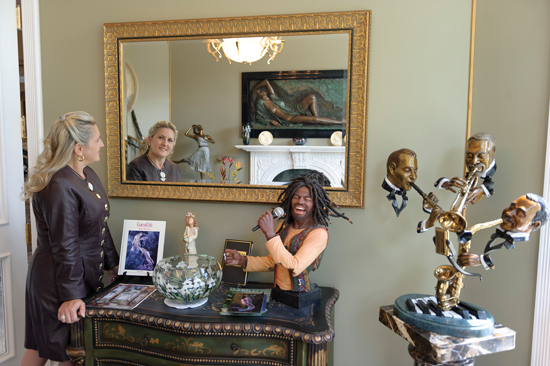 All four floors of the home are filled with amazing artwork, all categorized by theme. The first floor has the Athena Room, where they keep the Athenian art, including several marble reproductions of Botticelli works; the Grand Room, which has seating for 40 underneath a gorgeous, classically-inspired ceiling mural called “The Feast of Cleopatra” by artist Ruta Kanapuris; the Spirit West Room, which focuses around sculptures and paintings of Native Americans in the earthen tones of the Southwest; the Atlantis Room, which draws together sea-inspired works in every medium, centered around a bronze Jerry Joslin piece which brings to life a 6-foot tall mermaid; the Harmony Room, which is a celebration of music and features the New Orleans jazz-inspired work of Paul Wegner and a portrait of Dr. Lon and Linda done by renowned portraitist George Pollard; the Serenity Room, with only three oil paintings on the walls, each harkening to the seasons of spring, summer, and winter—ample decoration for a room in any other home, but when compared to the visual feast that preceded it, the Serenity Room feels Spartan, which Linda conceived as the home’s ultimate relaxation nook.

The second floor is host to the Venice Room, which has stunning Venetian tapestries and carnival masks, and the French Room, with depictions of Parisian cafés hung on the burgundy and gold walls. It also has several of their sculptural wall hangings by the world’s greatest relief sculptor, Bill Mack, who was one of the first artists that Dr. Lon and Linda met when they began their collection and who  was also responsible for first bringing them to Artexpo New York, now a mainstay of their ever-growing network of artists. 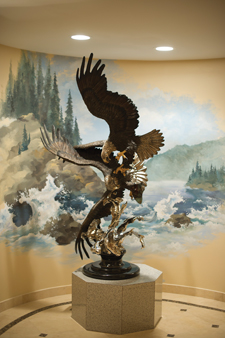 The third floor is also called the Gallery. Moving among the many pedestals, you’ll find Chester Fields’ first visceral eagle sculpture, “Splashdown,” a collection of Navajo jewelry, and a myriad of bronze busts and statues portraying Native Americans, Aztecs, and horses.

It’s in the basement, however, that the real surprise waits. Originally designed as an indoor pool, the Safari Room contains many stunning examples of the work of the world’s preeminent taxidermist, Ray Hatfield. Framed perfectly as you approach the doorway is a pair a lions, one of which was the second oldest lion from the Cincinnati Zoo. Also in the collection are a third lion, two zebras, a baboon, two monkeys, and the busts of a kudu, a gazelle, and a water buffalo. Every one of them looks vibrant and alive, as if only frozen for a moment, every bit as majestic as Hatfield’s work on display in the Smithsonian or the World Wildlife Museum.

Three bronze James Muir statues in the backyard pay grand tribute to the people whose courage built and defended our country. “Sons of Liberty 1775” is an 8.5-foot tall statue of a Revolutionary War minuteman, “Duty First” is a 15-foot rendering of a 26th Cavalry Philippine Scout from World War II on horseback, and “American Pieta” is a 9-foot tall reinterpretation of Michelangelo’s “Pieta” with the Statue of Liberty holding a fallen classical warrior who stands for every life given in service to our country. The unveiling of “American Pieta” was attended by more than 400 past and present service people from every branch of the military, as well as Captain James Lovell, Senator Mark Kirk, and a stealth bomber which flew over the backyard at the commencement of the ceremony.

A small building off of the main house is home to a large collection of the work of George Pollard, including portraits he did of John F. Kennedy, Muhammad Ali, Harry S. Truman, Pope John Paul II, Robert Kennedy, Ray Charles, and one of the exceptionally few portraits of Mother Theresa, signed by the subject and given to Dr. Lon by Pollard as a Christmas gift. Also included are photographs of Pollard with his iconic subjects.

The other building on the property is a home to many. It’s a suite that stands empty until any of the many artists who Dr. Lon and Linda have come to know over the years come through town. This cozy bungalow is more than just a place to lay your head and dream, it’s a place where dreams take a tangible form in reality through the many hands, mediums, and visions of the passionate few who create art for a living. It’s a passion that Dr. Lon and Linda have spent their lives surrounding themselves with and helped to foster in every way they can.