It started as any 40th wedding anniversary celebration might.  Dinner with some longtime special friends. Dessert and coffee in the living room. And then a dashing husband presenting his lovely wife with a gift.

“Jack walked across the room carrying a big envelope,” remembers Lake Bluff’s Carole Sandner of her husband’s present. “I was thinking, ‘Let this be that house in Florida,’” she says with a laugh. But to Carole’s pleasant surprise, they were design plans for a new building at the University of Notre Dame—Carole Sandner Hall.

“I was in complete shock. I had no idea that this was even something that Jack was working on,” Carole says. “But this was so much better than any house in Florida!”

The new building will house the Alliance for Catholic Education (ACE) at Notre Dame. ACE is a two-year service program that trains college graduates to work as teachers in Catholic schools across the United States. Participants earn a master’s degree in education. ACE has grown over the years and now includes a program to train individuals for jobs as Catholic school administrators and another that leads educators to an English as a New Language license.

Fr. Tim Scully, the Director of the Institute for Education Initiatives, has been the driving force behind ACE. He has overseen ACE’s exponential growth in the last several years.

“You can only imagine, if you know Carole Sandner, what an honor and delight it is to have her name on this building,” Fr. Scully says. “In my 30 years as a priest, no one has so beautifully embodied what it means to reach out to children than Carole Sandner. She’s an exemplary mother, phenomenal citizen, and great Christian.” 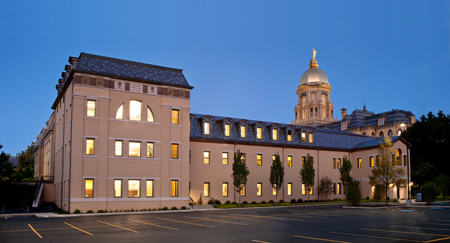 Carole Sandner Hall is the first building to be named after a woman at Notre Dame. “Many things came into alignment to make this happen,” explains Jack Sandner, a graduate of Notre Dame’s Law School, Board of Trustee member, and longtime supporter of the University. “It seemed so strange to me that Notre Dame is the ‘University of Our Lady’ and there wasn’t a single building named after a woman. I couldn’t be more proud to have Carole’s name on there. Her convictions, faith, nurturing abilities, dedication to education—this building should have her name.”

To know Carole is to know that she is a quiet, humble woman. Perhaps it was being the oldest of 12 children whom she helped raise, or being the mother to eight children of her own that molded this modest person who has always rolled up her sleeves to do whatever work needed to be done.

“This was something I really had to think about. My first reaction was that it should be Sandner Hall. But then when I thought about the Sisters of the Holy Cross and the other women who played such an important part in the founding of Notre Dame, there was no question in my mind at how thrilled I was to be associated with this building—and what this will mean to my children. There’s nothing more important than education,” Carole says.

In one of the building’s gathering spaces, there are large portraits of children that ACE teachers have educated. “When I think of those little faces and what Notre Dame’s teachers have brought to them, it just fills my heart,” says Carole. “I love that the ACE teachers will have this building to come back to as a home base to share their experiences.”

Carole Sandner Hall is located in the heart of Notre Dame’s expansive campus, in the shadow of the Golden Dome. For Notre Dame fans, it’s 50 steps from the front door of Carole Sandner Hall to the Grotto. It sits amidst a grouping of 19th century French-style brick structures that originally served as a convent for the Sisters of the Holy Cross. The Holy Cross sisters served at Notre Dame from 1843 until 1958, when the convent closed.

The major financial contributors to the building are Jack and Carole Sandner and their children, and Jack and Mary Ann Remick and their children from Rochester, Minnesota. The sisters’ former chapel at the southwest corner of the complex remains. It has been renovated and renamed Remick Commons.

The building will officially be dedicated on Friday, September 16, the weekend of the Notre Dame-Michigan State game.