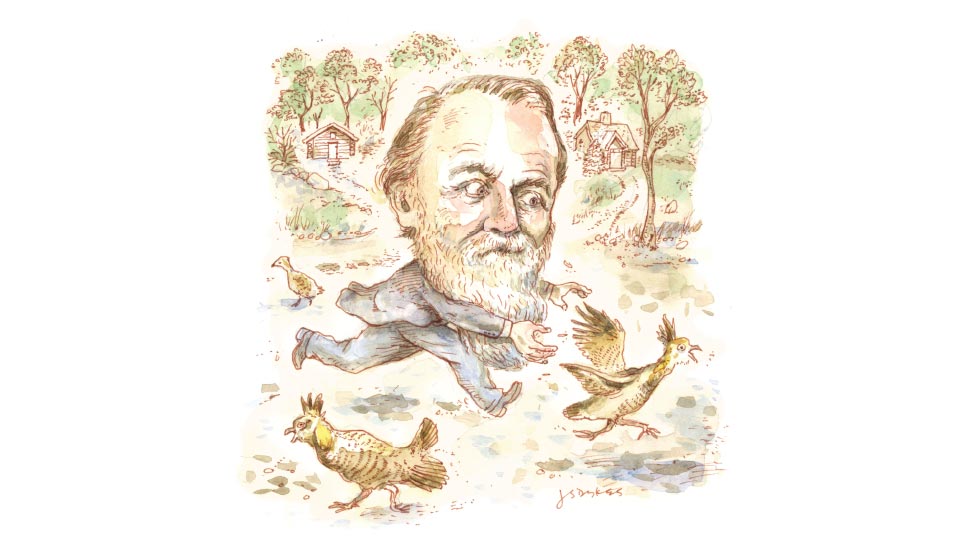 The underlying temperament for many of my missives is often indignance or disbelief at the peculiar things I see while time traveling through this modern version of my namesake city. But when I saw the article in this magazine about a new so-called “trend” in Evanston, all I could feel was bemusement.

Seems many of today’s bright-eyed young residents (millenniums, I think you call them?) have discovered something astoundingly new that no one in the history of the world (yes, that’s sarcasm) has ever thought of before! Indeed! They are building tiny homes for tiny chickens and keeping them in the back of their Evanston properties for the MODERN convenience of freshly laid eggs at the ready.

It’s so organic, they declare! A trend for the future, they opine!

And while I do enjoy a freshly cooked omelet now and again, I also know that this forward-thinking phenomenon is nothing new at all in this city. The only difference now is, you silly citizens buy your chickens (and give them names). In the 1850s when Northwestern was being built and the first settlers were building cabins along the swampy ridge, prairie chickens were running wild all through the town.

To prove my point, and back up my claim, I took a trip over to the Evanston History Center to refresh my memory on what life was back in Evanston in the last part of that 19th century. One Ms. Kris Hartzell, an archivist there, affirmed my belief that for the decades that followed Northwestern University’s founding and into the early 20th century, it is very likely that these hearty pioneer settlers would have needed to be self-sufficient in every manner.

Early Evanstonians grew fruit trees of all descriptions and planted corn. Some enterprising residents even grew cucumbers to sell to the pickle factory located nearby in what is now Skokie. And of course, they had chickens and even cattle.

It wasn’t easy farming in this eastern part of Evanston either. While more prosperous farms would come to flourish in northwest Evanston and Skokie, the soil from the ridge to the lake was sandy and everything west of the ridge was swampland. They had to make do with what they had and harvest enough from their land to feed their families and survive.

Ms. Hartzell was kind enough to share a book that was published in the decades after I left, but one that brought back so many memories it almost made me emotional. What triumphs we had! What a great place we created here!

A Classic Town: The Story of Evanston by an “Old Timer” was penned in 1891 by none other than the great Frances Elizabeth Willard. And to my surprise, there is even a kind testimonial to myself and one of my old colleagues. “To Orrington Lunt, the discoverer of Evanston, and to ex-governor John Evans, whose name our village bears, the humble record of its past in dedicated.”

Dear Frances was never an “old timer,” though I can relate to the sentiment (now more than ever) and the dramatic transformation she had already witnessed in the 37 years since Evanston was named and platted in 1854.

She opened her 1891 book with an “introductory” chapter about Mr. Samuel Reed and his family. Their log house (near the swampy side of the ridge in south Evanston) was “surrounded by water a good share of the time, and an old-fashioned cradle in which Mrs. Reed had rocked her first-born was used by her boys as a boat in which to go duck-shooting.” It is also recorded that “in ranging over to the lakeshore to look after his cattle, Mr. Reed was wont to wade through water up to his waist.”

But perhaps the most delightful part of the Reed passage—and most pertinent to the topic at hand—is the tale of Mrs. Reed, a woman who I dare say might have been a billionaire entrepreneur in today’s times. “Game was abundant,” Miss Willard wrote, and “the enterprising housewife arranged a trap near by with a rope tied to her kitchen window from which it could be sprung. In this ingenious fashion she did her marketing almost as conveniently as modern matrons do by telephone; twenty-one prairie chickens at one fell swoop having become her prey.”

It is with amusement that I continued to read through this “history” that our Frances penned not even four decades after Evanston was founded. I try to imagine what she would think of this chicken coop “trend” and how she would record it for future generations. It would undoubtedly be more poetic than my scribbles, that is certain.

“History writing is a dissecting process; therefore, before tearing apart the petals, let us mark for a moment the flower as a whole,” she wrote, later praising the beauty of the new fountain in the square and the newly built street called Sheridan Road. “It is a quiet city that still prefers to call itself a village; kissed on one cheek by Michigan’s waves, fanned from behind by prairie breezes, jeweled with happy homesteads set in waving green, and wreathed about with prairie wild flowers, a town as comely as a bridge, even to stranger’s eyes.”

It is hard to grumble, or even mock, after such lovely words.

Something tells me that Frances Willard might view this “trend” that has gone in and out of vogue (and back again) from homesteads to backyards over the last 150 years as just another petal in that metaphorical flower in time—a nod to future generations of resourceful citizens and a testament to the pioneers who helped us build our Evans town.

So be it then.

Let your chickens roam free, and adorn their coops as you see fit. Just be sure to steer clear of Mrs. Reed’s cabin.