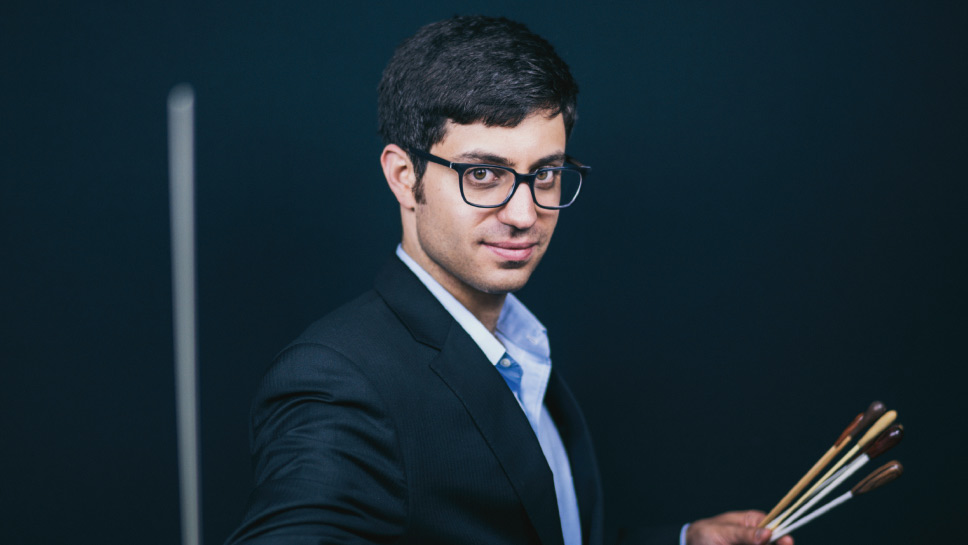 By Christmas 2017, that was how many internet visitors had come to hear and share Nicholas Hersh’s ethereal performance from Indiana University’s sound foundry.

They came to YouTube to experience his arrangement of “Bohemian Rhapsody” played by IU’s 57-member student Studio Orchestra and viola soloist Sarah Harball. But more than that, visitors came to see him conduct his own arrangement—because conducting symphonic music is not only aural and intellectual, it’s visual, physical and artistically athletic. And most alluring to young artists, it’s emotional. Conducting is not only Beethoven; it’s also Olivier’s MacBeth with a dash of “Make My Day” Eastwood.

At 3,922,275 visitors, he had become an all-but-ratified meteoric phenomenon, canonized by social media. In the month after last Christmas, another 1.5 million digital visitors stopped by.

This is rock star trajectory for music gene-spliced into modern consciousness by Freddie Mercury and Queen. As for internet fame, Bono gets that many hits. Twenty-something classical music directors seldom do. Hersh, now 30, didn’t know five years ago, but he was gripping his conductor’s baton like Thor’s hammer, and awaiting the lightning bolt to arrive at his podium. And it did.

Within a year, he applied to be assistant director of the Baltimore Symphony Orchestra. It was just a hope.

“I never even thought I’d get an interview,” he says. But he did. “That was a surprise. But I figured I wouldn’t hear from them. A week later, they called, and said I got the job. So, that was the two big surprises in my life.”

And two years later, he was promoted to associate conductor, which implies where he is headed. He has become the designated, permanent understudy to orchestra Maestra Marin Alsop, the only woman to lead a major American orchestra.

Context is important. A decade hence from his genteel only-child life in Philip Hersh and Ann Roberts’ Evanston home, “Nick” stands poised at the edge of a global career. He has a musical wunderkind’s reputation. Even he acknowledges the explosive Thor-like electricity.

Hersh has the customary Bach, Tchaikovsky, and Mahler genes flowing into his heart, but there is 21st century exuberance, too. His Off the Cuff concerts are a hit, as are his Pulse shows, in which he blends indie rock bands with selected classical pros to produce multi-flavored musical kaleidoscopes.

Eclectic throngs of Baltimoreans attend those events who had never before sampled classical music.

“He’s one of the most talented young conductors I’ve worked with,” Baltimore Concertmaster Jonathon Carney told the Baltimore Sun.”He has a wonderful set of ears. He expresses himself very well with an orchestra, which can be hard to do when you’re young. And he’s such a nice guy. He puts the orchestra at ease with him. He’s a pure joy to work with.”

This ease is the product of humility, musical skill, and unyielding hard work. There are no shortcuts. But, to his core, he’s the product of brilliant parents who let him love creating art.

His mother is Ann Roberts, a renowned art history professor, author, and associate dean at Lake Forest College. His father had been one of the Chicago Tribune’s legendary sports reporters for more than three decades. Phil Hersh is one of the nation’s acknowledged journalistic experts on the Olympics and covered 19 Olympics.

The Hersh scion might have grown up in Evanston’s enriching public schools—earning his Stanford bachelor’s in music (double concentration in cello performance and conducting) and master’s in music conducting at Indiana University. But in Baltimore, he’s virtually a prodigal son.

His father’s second journalism job was at the Baltimore Evening Sun. Mom was born in Baltimore. Veritable kismet.

The Hersh home they created in Evanston was perpetually awash in classical music. His father had a substantial record collection. His mother was a brilliant art scholar. Both were national celebrities, and deservedly so before Nicholas arrived.

“My love for music came entirely out of my parents love for music,” he says. “They had subscribed to the Lyric Opera years before I was even born. There was always that mix of music and art in our house. So, when I came home one day in the third grade and told them I wanted to play cello, they went out right away and got me a cello.”

But the urge to lead 100 classical musicians was not far behind.

“I always thought I could conduct the pieces we played better than the conductor,” he recalls sheepishly of his high school days, “After all, I had seen Star Wars about 112 times, and figured I might want to be the next (film music creator) John Williams. Then I found out I had just a few musical nuggets, but not enough vision to do more. So, I settled on orchestration, arranging and the cello.”

Then came IU’s Jacobs School of Music and a squadron of acclaimed conducting mentors. “I learned from the very best,” he says. Phil Hersh’s heart was nabbed. And still is.

“I remember the first experience of seeing him conduct,” his dad recalls. “It was at Stanford in this massive church. He picked Mozart’s Requiem as a school recital. There I sat with tears streaming down my face. That was my son up there, and thousands of people were cheering him.”

As for the “vision thing,” Hersh is well grounded. He drives a Hyundai Sonata, yet admits affection for the role-playing video game Skyrim. He bakes bread, likes coffee; hates hypocrisy and secretly fears never being good enough. Mostly he loves Caitlin Brown, his IU sweetheart and fiancée. They are to be married next September.

“What I hope to do is leave behind something that makes the world better,” he says. “Yes, I would say I’ve been very lucky, along with some very hard work. And yes, what’s happened to me is a little like a lightning strike that propels you from one place to the next. But careers wind, and go back and forth, and side to side. You can be faced with a lot of rejection. But you just have to keep going.’’

And mostly, keep your eyes looking up for that next lightning bolt.