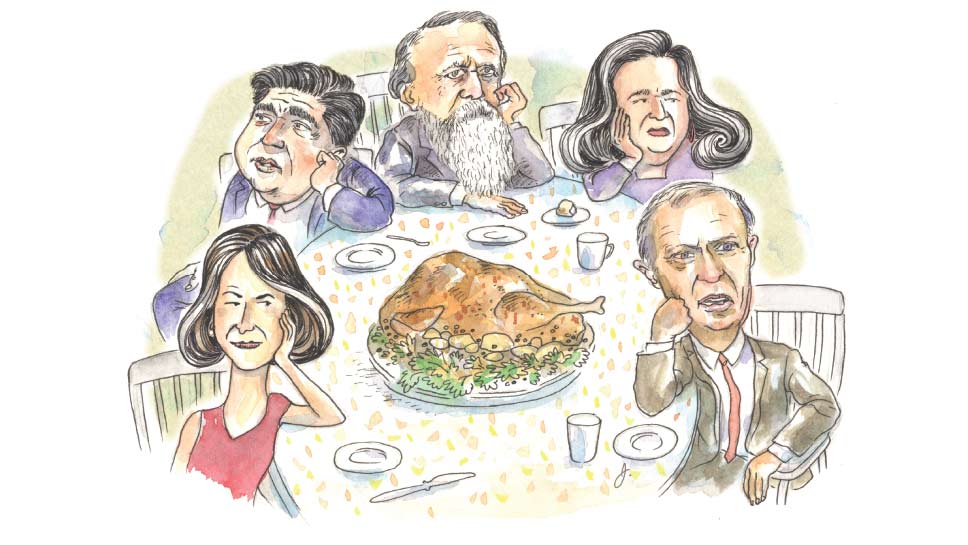 What will Thanksgiving dinner be like at the Rauner or Pritkzer household this November? With families divided along political lines and one of the most contentious gubernatorial races in recent memory, many of us will likely be fighting over more than the wishbone this year. ILLUSTRATION BY JOHN S. DYKES

Gather ‘round, oh faithful readers. I have two things to say about this infernal governor’s race that has all of you 21st century Illinoisans in such a tizzy.

First off, I am quite relieved (I cannot express how much so) to not have been involved in this mean-spirited American political nonsense in my day. When I became the second Governor in the Territory of Colorado in 1862, all it took was an appointment by my good friend and neighbor Mr. Abraham Lincoln. Things certainly were more civilized in those days. No one was throwing around insults or talking about my toilet or none of this current silliness.
Secondly, and most urgently, the single thing I am the most grateful for at this moment in history is that I won’t be having Thanksgiving dinner with the Pritzkers or the Rauners. I wasn’t invited but even if I were to be, last minute, I would decline. Politely, of course. I’d send my regards and best wishes. But you can just imagine what the conversation would be like among these politically polarized families in the weeks after this election?

On the side (and family tree) of Mr. J.B. Pritzker, former Evanstonian, philanthropist, and now Democratic candidate for the Governor of Illinois, we have his dear cousin, Jennifer Pritzker (the Colonel)—a devoted Republican who not only generously supported the campaign of President Donald J. Trump but also made significant contributions to renovate the mansion where Mr. Pritzker’s opponent now lives. That is correct. Sitting Governor Bruce Rauner (the Republican candidate) and his lovely First Lady Diana spearheaded a $15 million campaign to renovate the governor’s mansion without taxpayer money (something I always applaud, regardless of the century). Jennifer (who also lived in Evanston for some time and owned a few B&Bs here) gave at least $250,000 to that endeavor.

On the side of Governor Rauner there is also some political division, though perhaps not quite as extreme. Though she dutifully stands by her husband’s campaign platform, Diana is a proud Democrat, and has very vocally expressed support for many liberal-minded causes. In addition to being president of the Ounce of Prevention fund for early childhood education, she has spoken out in support of Planned Parenthood and is on record as having contributed to the campaign of former President Barack Obama. And for the record, this family also has deep ties to the North Shore. Bruce and Diana not only maintain their mansion in nearby Winnetka but she is so devoted to her piano lessons at the Music Institute of Chicago (based here in Evanston).

With a multi-millionaire on one ticket and a billionaire on the other, I am most certain the Thanksgiving table settings and service at either residence would be top-shelf. Yet, depending on which way the wind blows, it could be akin to breaking wishbones and dinner rolls with the Capulets and the Montagues.

Pass the butter knife, or the dagger? I respectfully choose neither.

Everything about this fall election—this race in particular—reflects all that I find vexing about modern American politics. Sure, we had our fair share of scandal and the occasional rebellion (I’ll tell you about the newsprint pulpits sometime) in my day, but overall, a difference of political opinion was just that. It was certainly not worth breaking up a devoted family, or a friendship. No excuse whatsoever to be impolite or stay up into the wee hours writing long, vitriolic messages in ALL CAPITAL letters on the Tweety. Preposterous!

Though to be fair, Mr. Lincoln and I were Republicans in an age when the party was new and full of noble visions for the future. We had only our second ever national convention on May 16, 1860, in the years before my friend rose in stature and was elected to be our president. What confounds me is how similar our Republican values then are to those of today’s Democratic party; it’s almost as if the two parties did a big switcheroo over the decades!

That said, my tenure as governor was not without its blemishes (one very famously documented) but for the most part, our goal was to build a new territory for our citizens to find peace and prosperity. Just as my colleagues and I founded what you know as Northwestern here in Evanston, my good friend Reverend John Chivington and I founded the Colorado Seminary in Colorado (which is now known as University of Denver).

Myself and fellow Republicans during those years advocated to expand federal powers—a necessity if we were to fund a transcontinental railroad, state university system, and establish a national currency. We disagreed greatly with Democrats of that time, for certain, but circumstances forced us to march forward in unison, working across the aisle to find common ground and do what was best for a healing nation.

While I fully admit to being naive and possibly ill-informed (I blame fake news) about the root of current political polarization in this state—and this governor’s race, in particular—I do believe that a loss of civility is a loss for voters, and for the greater good of humankind.

And if I were to be invited to (and were to accept) either Thanksgiving dinner, I would tell Mr. Pritzker and Mr. Rauner this myself. We need more allies, not adversaries. I would demand that they both put away the petty insults and work across the aisle (and Thanksgiving dinner table) to find solutions to our state’s most urgent fiscal, economic, and social challenges.

In fact, that gives me an idea.

Perhaps the solution is not to be a guest at either of their politically divided Thanksgiving family feasts but to invite them into my imaginary holiday dinner conversation. The table in my imagination is Chippendale mahogany; the chairs are perfectly upholstered.

Mr. Pritzker, his lovely wife M.K., and cousin Jennifer would be on one side; Mr. Rauner and the First Lady on the other. First they could discuss the progress of the Illinois Governor’s Mansion, then perhaps trade witty banter about the weather this time of year in Springfield, to be possibly followed with more pleasantries about life in Evanston and on the North Shore.

A prayer of thanks might be in order, and then I’d start in with my own personal campaign speech.

I am, now and always, on the side of the voter and the citizen. We deserve disclosure and civil discourse. We deserve better than what we’ve been witnessing on the evening news.

With that, there’s only one thing left to say, dear readers. Go vote on November 6.

The voice belongs to you; not them.