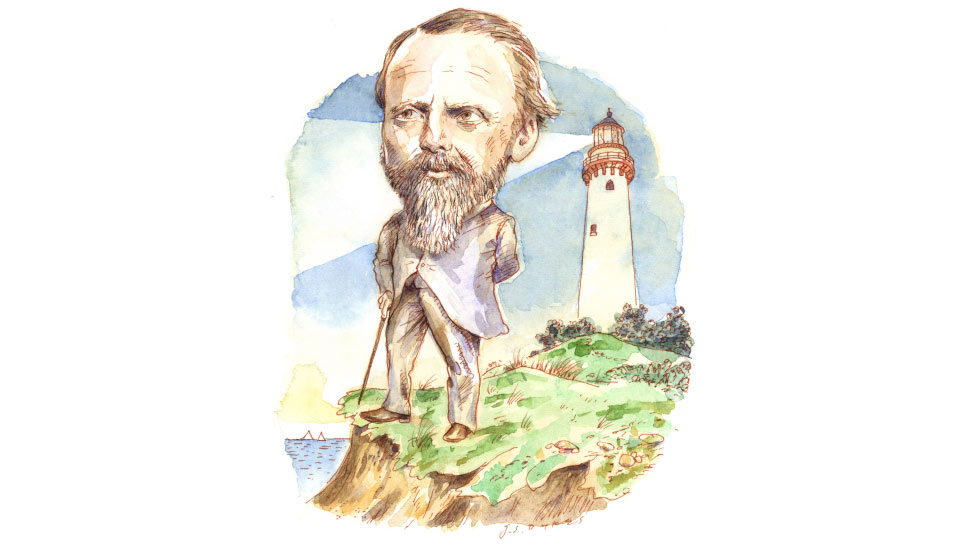 John Evans reflects on the wreck of the Lady Elgin and the push to erect the North Shore’s first lighthouse in Evanston. ILLUSTRATION BY JOHN S. DYKES

Those of you have been following these anachronistic ramblings thus far are quite aware of my allegiances to the fine young men and women being educated over at North and Western (I still can’t bring myself to run the two together so please forgive me) and the greater good that has come from the university my Methodist colleagues and I founded here in 1855. I was reminded of one of those valiant feats earlier this summer when visiting Harley Clarke’s old place (which could be now officially slated for demolition, despite best efforts by vigilant citizens) and gazing up at the majestic Grosse Point Lighthouse. Since some modern day Evanstonians seem to be (how shall I say this delicately?) uneducated about their own history, I thought it might be worth recounting—in honor of those lives that have been saved, and in memory of those that perished on the waters of Lake Michigan.

The year was 1860 and we were all still rebuilding from a horrible fire in Chicago. My friend (and neighbor) Mr. Abraham Lincoln was vigorously running a campaign to become the 16th president of the United States, eager to get the Republicans in control of a country that was deeply divided. A Civil War seemed unavoidable as tempers flared and states began to declare their allegiances. And so, it was during this very terrible time in our country’s history that a group of Democrats in Milwaukee booked passage on a wood-hulled, sidewheel steamboat called the Lady Elgin.

Historic accounts show their September 7 voyage to the Chicago Harbor was in part a fundraising scheme (as popular then as it is today) but also seen as a fun excursion to boost spirits. They were eager to attend a Democratic rally and dinner-dance, and hear a speech by Democratic presidential candidate and U.S. Senator Stephen A. Douglas. Captain Jack Wilson steered the Lady Elgin down from Milwaukee to Chicago that day. But when it was time to return, the captain vocalized some concern about the state of the weather. He knew how perilous a September gale could be. Nonetheless, they were pressured to make the return, and so he steered her back out of the Chicago Harbor—carrying even more passengers than the Lady Elgin arrived with, some boarding without purchasing a ticket.

Accounts from that fateful evening indicate that it was about 11:30 p.m. when the boat cleared the harbor and headed out over the open water. Many guests retired to their chambers for the evening, exhausted by the day’s events. Others opted to enjoy the September air in one of the steamboat’s elegant salons as the storm continued to roll in.

The Lady Elgin held her own on the rocky waters and had been making progress north along the shores of my namesake city of Evanston and up to Winnetka when around 2:30 a.m. on September 8, passengers reported looking through portholes to see the lights of a vessel headed straight toward them. It was the Augusta—a schooner filled with lumber that had been battered by the storm, causing it to collide with the Lady Elgin. I have heard tell there was a sense of chaos onboard as the passengers could feel the boat sinking into the lake. While the Augusta continued its voyage down to Chicago, Lady Elgin was under water within 30 minutes, its wreckage strewn from the Evanston-Wilmette border to its final resting place near Highwood.

To this day, the sinking of the Lady Elgin is considered one of the deadliest tragedies in Great Lakes history. However, the story of the lighthouse that was built because of it—our own Grosse Point Lighthouse—is a heroic tale. Some fled the Lady Elgin on lifeboats and other debris but the strong currents carried them to various parts of the North Shore. One of the lifeboats made its way to shore near the home of Jared Gage in Winnetka, prompting a call to action that reached down to Evanston.

A young man named Edward Spencer (Northwestern class of 1862) and students from Garrett Bible Institute were among the first responders and are credited with saving the lives of many (while Winnetka residents opened their homes as temporary hospitals). Spencer himself is said to have single-handedly rescued more than 17 people over the course of six hours, sustaining an injury that left him an invalid for the rest of his life. A plaque in his honor was placed in the Northwestern University gymnasium and is now housed in the Northwestern University library.

That moment in history was a catalyst for a public outcry for better life-saving facilities on Lake Michigan (not to mention an 1861 song titled “Lost on the Lady Elgin” by Mr. Henry C. Work). After considerable lobbying and petitions by the citizens of Evanston throughout the Civil War, the federal government finally agreed to commission the Grosse Point Light Station in Evanston. Built in the Italianate style, the station was completed in 1873 and shone its first beacon of light in March 1874 for the start of the shipping season. It was largely manned and operated by Northwestern students until the U.S. Coast Guard took over in 1916 (decommissioning it temporarily during World War II). Not only does it have the distinction of being the nation’s only student-manned life-saving station, but those dedicated Northwestern alumni are credited for saving more than 400 people.

While no longer in active use, the light shines on today and the station is designated as a National Historic Landmark and has a deserved place on the National Register of Historic Places. As for the Lady Elgin, what remains of her grandeur has found a final resting place off the shores of Highwood.

I think we should all be grateful to the Lighthouse Park District and those who work to keep the Grosse Point Lighthouse operational (including the fellow who recently worked to restore its Fresnel lens) and standing guard across our waters. But the cantankerous old man in me also thinks we need to learn from our history and stay vigilant to the dangers of the lake we so adore.

Despite its beauty, Lake Michigan—the fifth-largest lake by volume and surface in the world—is considered the deadliest of all the Great Lakes. Mr. Bob Pratt, executive director of the Great Lakes Surf Rescue Project (GLSRP), is working to raise awareness about this topic, but the facts remain.

In statistics that are updated daily, GLSRP reports that more than 660 people have either drowned or gone missing in Great Lakes waters since 2010.
In 2018, there have been more than a dozen on Lake Michigan alone. The latest on that list of the missing is Mr. Jon Santarelli, a man who fell into the water near Navy Pier from a boat competing in the Race to Mackinac in late July.

It is a heartbreaking fact but one that should not be ignored.

So, the next time you venture out on your sailboat or take on the waves by the shore, and look up to the sky at our Grosse Point Lighthouse, remember our early Wildcat life savers, young Edward Spencer’s sacrifice, and those who lost their lives that day in September and beyond.

Also, remember that it is because of the Grosse Point Light and the work of brave Evanstonians that a U.S. Coast Guard station is now stationed just over our border. For all the tragedies on the record books, there are many more lives saved because of these brave women and men.
In fact, if we’re done here for now, I think I’m going to go write them a thank you note…