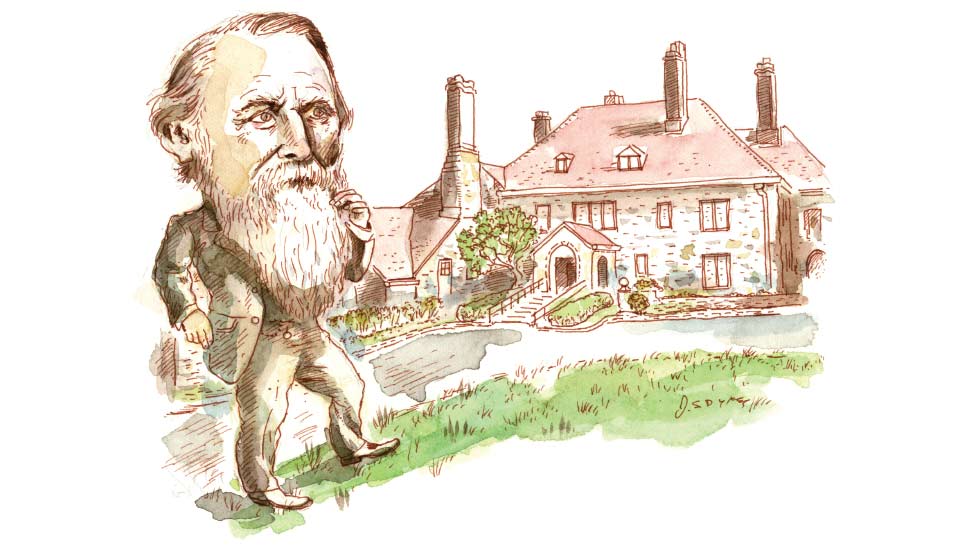 John Evans breaks his own rules to talk politics and investigate a proposal to save the Harley Clarke Mansion from the wrecking ball. ILLUSTRATION BY JOHN S DYKES

Faithful readers who turn to these silly musings of mine every other month know that I deliberately avoid any topic that even slightly broaches the subject of local politics. I follow along, as any good citizen should, limiting opinion and commentary to my own internal (and rather hilarious) monologue. But I must confess that I caught wind of a certain civic issue that has me a bit confounded, and concerned—enough to break my own rules and prattle on to anyone who cares to listen.

This all started with a certain city council meeting recently about the fate of Harley Clarke’s old place up on Sheridan Road and a comment made by a certain alderman in attendance that left me feeling, well, a bit flabbergasted. Now I’m sure this public servant didn’t mean any offense when she so casually dismissed a 1927 landmark (listed on the National Register of Historic Places) as “that house,” which happened to come as part of a parcel of land the City of Evanston acquired in 1965 from the Sigma Chi Fraternity. Was “never really looked at as an asset,” she says. Could have been torn down decades ago! Nice to “look at” but is it really worth the bother?

Imagine my internal conflict and consternation. (“But you are biased, Evans!” I kept telling myself.) However, it is in that spirit of community discourse (and not intending any offense to any involved parties) that I so boldly offer my perspective as a 19th century contemporary of Mr. Clarke—one willing to stake my reputation on a claim that this is more than just “that house.”

Walk back with me through time to the flapper-era Evanston that was booming before the Great Depression to the days when Mr. Harley Lyman Clarke (a teetotaling Chicago businessman like myself) hired architect Richard Powers to design a three-story brick mansion right next to the Grosse Point Lighthouse (on the shores of what is now known as Lighthouse Beach). Powers was not as famous as old Howard Van Doren Shaw, but he did get one Mr. Jens Jensen involved in landscaping the five-acre lakefront gardens, determined to ensure that this 37,700-square-foot estate would stand the test of time. Valued at $500,000 in 1938, it was the first in the Chicago area to win an arts commission award. And Jensen, who also designed the Lily Pool at Lincoln Park Zoo, has publicly said that working on the Clarke place with Powers was one of his “fondest memories.”

The style was French Eclectic, representing a new modern age and all the electrified wonder that came with it. They say it was one of the largest and grandest estate homes Evanston had seen before the big stock market crash, with a glass conservatory, a ballroom, and a newfangled basement area called a “rumpus room.” As president of Utilities Power and Light, Clarke was indeed a wealthy man but also a generous one to boot. He was a patron of the arts, donating $300,000 to create the Chicago Civic Shakespeare Society (an institution in Chicago that I’m sure some of the ladies featured in this issue might appreciate) and eventually went on to buy out William Fox for the Fox Studios film empire in Hollywood. Rumor is that he was so enamored with filmmaking in the late 1920s and early 1930s that he installed a state-of-the-art media room in the ballroom of his mansion in Evanston. Can you picture it? I am so sorry I wasn’t there.

And yes, he and his wife eventually lost their $60 million fortune during the Great Depression, and yes, the property did go through one other owner before it landed on the city land records in 1965, but I hereby declare (with some emotion) that this “house” in question is more than just another pile of old bricks and glass. Now ranked as the 6th most endangered landmark in Illinois, the Harley Clarke Mansion is a piece of Evanston history—one that at least one nonprofit organization in town believes is worth saving.

At the center of this recent debate over the fate of the property (which has been going on since last year) is a proposal by Evanston Lakehouse & Gardens to let their group turn the mansion and grounds into an arts center that everyone in Evanston could enjoy. Intrigued to learn more and continue this inquiry, I got in touch with Tom Hodgman and his colleagues.

“We’ve had several conversations with elected officials and feel that there is still significant interest in saving this historic place,” he said. “But our plan is more than saving a historic structure. It’s about saving the building to become something—a Great Lakes education center, a year-round Community Lakehouse with programs for seniors, kids, parents, and a cafe.”

I can see that it’s a complicated proposal and that in its current state, the old mansion is costing the city some $15,000 per year. I can also see that there is some concern that as well-intentioned as the Evanston Lakehouse & Gardens citizens may be, they may not be able to raise enough money to make their vision come to life.
But imagine if they could, and what would be possible if they did. “The mission of Evanston Lakehouse & Gardens is to preserve and restore Evanston’s only public lakefront estate by creating an inspiring community space that fosters appreciation of the environment, the arts, and the rich cultural history of Evanston,” Hodgman and his group added. “This unique building in a unique setting at the intersection of the lake, beach, dunes, and Jens Jensen gardens will become our gateway to the Great Lakes. People will come here to visit historically significant architecture, connect with the Great Lakes, and celebrate special occasions—all of which will generate economic activity in Evanston.”

As far as the alderman’s comments about “that building” which left me so agitated, the group offers this in response: “Communities with vision know so much more now than they did in 1965 about how to adaptively reuse important historic buildings in a way that makes them a true asset.”

The case they make, in my mind, is one worth listening to. The mansion has been a public asset for 49 years, and the only lakefront home in Evanston that could be open to everyone. A “once in a lifetime chance to leave a legacy for future generations, young and old.”

By the time this column goes to press, who knows what will have developed or transpired. But at least I know that I’ve said my peace, and recorded my opinion for posterity. Now off to find that beach token …