You don’t need to be a William Shakespeare scholar to know the line that makes Lady Macbeth one of the most iconic female characters in theater history—”Out, damned spot!” The tragedy of Macbeth is among Shakespeare’s most beloved works, and has been interpreted myriad ways over the centuries. But it was Evanston actress Chaon (pronounced “Shawn”) Cross who helped shape an important new prologue in Chicago Shakespeare Theater’s (CST) latest production of Macbeth—one that comes with her deep knowledge of the script’s embedded codes and from her own experience as a mother.

“This is a woman who has had a baby … that is alluded to in the script … and there is no baby around,” says Cross in a recent interview in the theater lobby at Navy Pier, where Macbeth continues through June 24 in CST’s newest space, The Yard.

Cross experienced post-partum depression after the birth of her third child and while doing a Macbeth workshop at Writer’s Theatre in Glencoe. Shortly afterwards, she began to think about how Lady Macbeth might be experiencing post-partum psychosis in addition to grief—and how any anguish from such a loss might impact the plot. 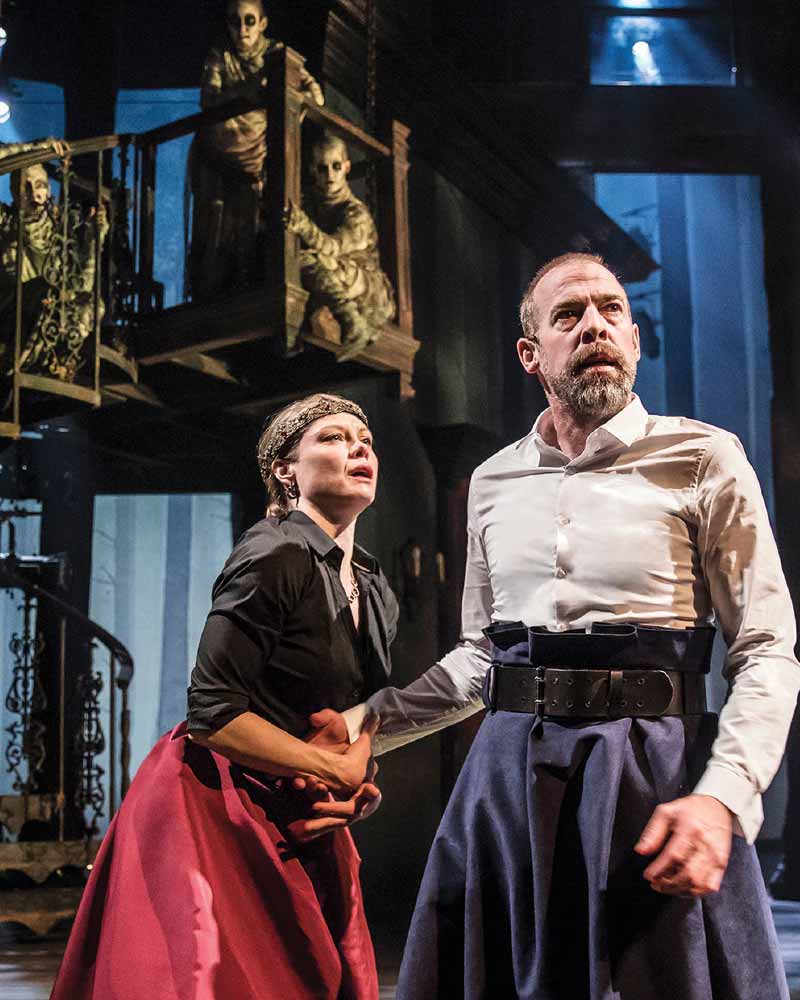 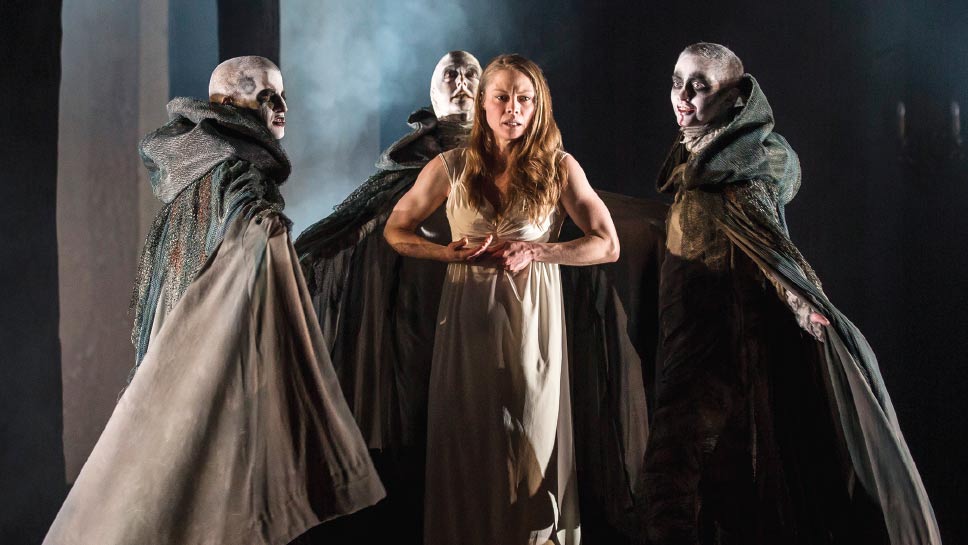 Evanston actress Chaon Cross has built a large portion of her theatrical career around bringing the works of William Shakespeare to life on stages, in parks, and other spaces around the country. But in Chicago Shakespeare Theater’s latest production of Macbeth, the Washington Elementary mother’s input was critical to an opening scene that was added in a fresh new interpretation of life, death, and regicide in 16th century Scotland. PHOTOGRAPHY BY LIZ LAUREN 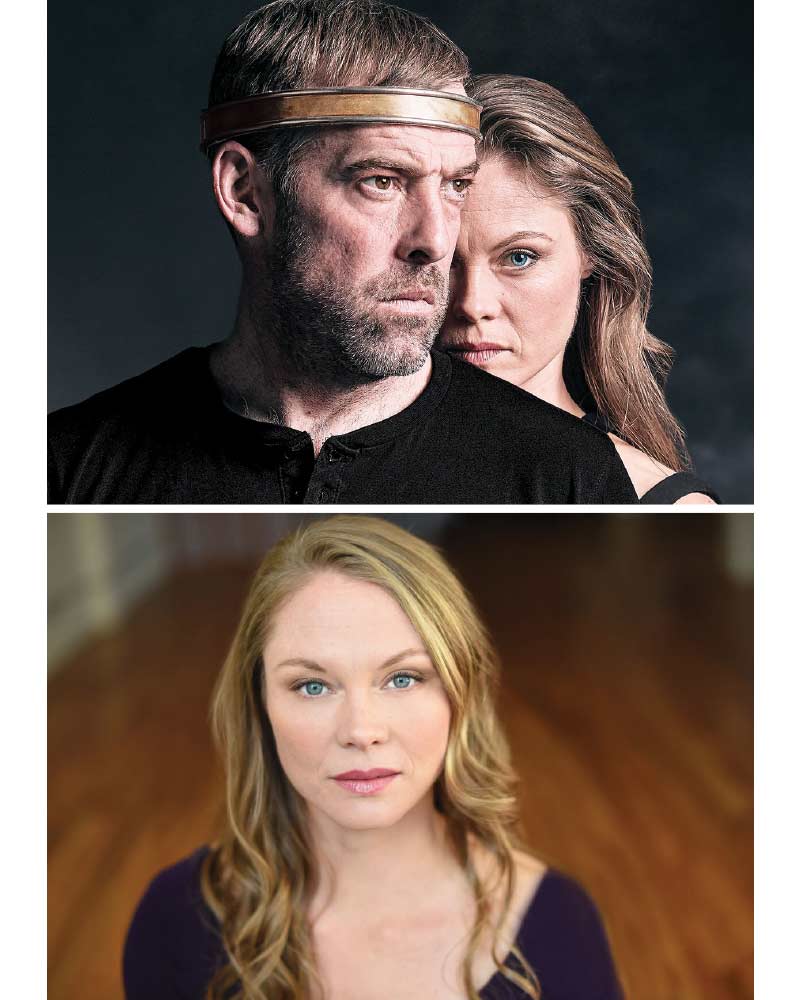 “It made me consider this woman’s physical and mental state after bearing and then losing a child, and how these elements influence her actions throughout the play. I feel mental illness is a lingering theme throughout this play, and that Shakespeare was writing about it long before it was medically named.”

It’s a pretty powerful take on a play that’s been staged countless times throughout the centuries, and one that CST added in a brief opening scene in this current production. The lights dim and ominous music plays (live, from a catwalk above the stage) as Lady Macbeth silently holds a baby, mourning, then places it back in a box, never to retrieve it again.

It’s somber and impactful, and sets the tone for the rest of the two-act play. Cross says she is grateful to have her voice, and her perspective, not only heard but incorporated into a character she played in her early days as an actress and who has long been among her favorites.

“I love her drive and how resourceful she is, and I love how she loves her husband,” says Cross. “I also really identify in investing in something so much that you would lose sight of what’s right and wrong. If you think about it, the men are away and come back, having seen and heard horrible things. It makes a lot of sense to me that this makes these characters more susceptible to illnesses of the mind.”

A native of the picturesque Ozark town of Eureka Springs, Ark., Cross studied theater at Stephen’s College in Columbia, Mo., hitting the road almost immediately after graduation with the non-equity Shenandoah Shakespeare company (now known as the American Shakespeare Center). She moved to Chicago in 2001, meeting a man from the Northern Ireland border town of Derry less than a week later at a backyard barbecue held at the home of a mutual friend.

“We were playing bocce ball and that’s how it all started,” she says, explaining that she married Brendan Kerlin three years later. Today, the couple has three sons—two who are students at Washington Elementary and another at a local preschool.

After living for many years on the north side of Chicago (and spending about two hours driving the three boys to three different schools), she says they love the community they found in Evanston. In fact, the creativity that surrounds them with other working artists in the neighborhood is the perfect environment for Cross’s next dream project—creating a collaborative film or production company that’s woman-focused and empowering.

Until then, she’s lighting up the stage (and impacting direction) at Chicago Shakespeare Theater and taking on a variety of prominent roles in productions throughout the country. Her resume includes multiple roles in productions at CST, Lyric Opera of Chicago, Lookingglass Theatre, Court Theatre, Redmoon Theater, Cleveland Play House, Milwaukee Repertory Theater, and many others. Television credits include The Exorcist, Chicago Fire, Boss, and Detroit 1-8-7. Cross has also appeared in the films Widows and My Dog Skip.

“The stage will always be my true love,” says Cross, who happily admits that she will always have an affinity to the works of Shakespeare. In part, perhaps, because it’s how she got her start. But also, because—as is evident in the current production of Macbeth—her deep understanding of how the original Folios work makes it that much more enjoyable to decipher and interpret.

The passage from the play that resonates with her most (and one she chooses to close the interview with) is a line from Macbeth himself that brings us back to where we started—the emotional pain that drives a series of events that can never be undone: “Canst thou not minister to a mind diseased/Pluck from the memory a rooted sorrow/Raze out the written troubles of the brain/And with some sweet oblivious antidote/Cleanse the stuff’d bosom of that perilous stuff/Which weighs upon the heart?”

Macbeth continues at The Yard at Chicago Shakespeare Theater through June 24. For more information (including information about a possible extension), visit chicagoshakes.com/macbeth.