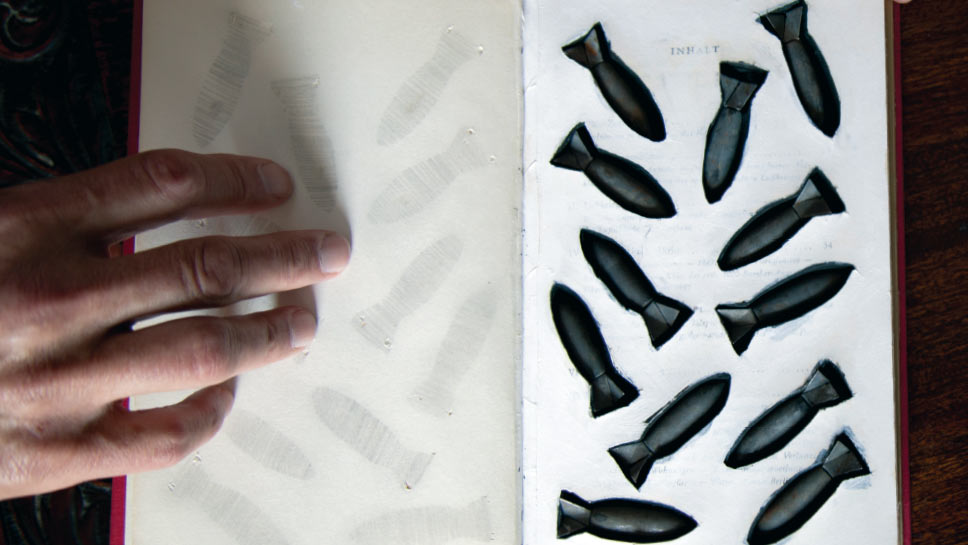 Evanston’s Michael Thompson specializes in the art of books.

Evanston’s Michael Thompson, owner of Boreas Fine Art, an international purveyor of rare books and fine art, and the artists’ books that are an expression of both, gently places a slim, plastic case on the mahogany table in his studio.

Without being told, you know it contains a wonder. Inside a beautiful white book beckons, giving the illusion of being lit from within. Fine Japanese-paper pages, translucent, and interleaved with sheets of clear foil, turn, revealing the source of the glow: Pale patterns of gold lettering that faintly reproduce fragments of the text of a poem by Stephan Reich in Japanese, German and English. Created when book artist Veronika Schä pers exposed the paper to intense ultraviolet light, the characters are bits of phrases posted on signs to deter individuals from suicide.

Schaper’s work is a remembrance—something of a paper lament for the suicide victims.

The title of the book, Aokigahara, is taken from the Japanese forest of the same name, second only to San Francisco’s Golden Gate bridge as the place people most often choose to end their lives. “So you will see these words posted there,” Thompson explains. 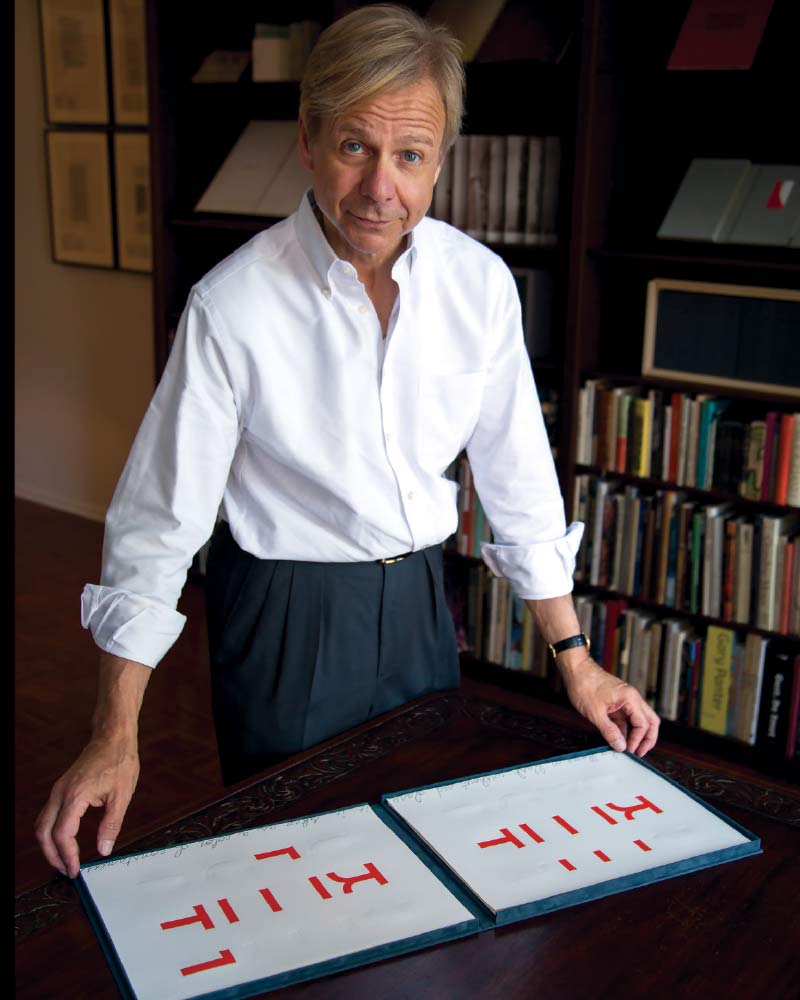 Conceptually and artistically, Aokigahara is powerful. The pages tipped into the book, some cut short, some left longer, are stitched together with no apparent connection to each other than the silk thread that binds them. They flutter ghostlike as you turn, your passage through a momentary animation, lit by the flicker of the characters that are there one second, gone the next.

Thompson has shown me this rare volume—one of a limited edition of 18 printed—for two reasons: One, because Schapers is one of the most talented and collectible book artists in the world right now, alongside artists such as Sarah Bryant and Russell Maret. And two, when it comes to understanding books as art, showing is better than telling.

“You can tell someone what an artist’s book is, but when you see it, touch it, and in this case, page through it, you get it,” says Thompson. If you are unfamiliar with books as a collectible art form, you are not alone.

“Most people still think of fine art as something they can hang on a wall,” he says. “And of books primarily as vehicles for text. The majority of people who know about and collect artist books are rare-book collectors.”

But that may change. The power the form of a book has to communicate an artistic expression that is tactile, visual, and experiential makes it perhaps the most effective vehicle for conceptual art. Historically, artist books have their roots in late eighteenth century finely-crafted, hand colored editions from William Blake, and in the nineteenth and early twentieth centuries livres d’artistes created primarily in France by artists, writers, and publishers such as Stéphen Mallarmé, Édouard Manet, André Derain, Ambroise Vollard, and Daniel-Henri Kahnweiler.

But in the 1960s as a reaction to those overly-ornate books, artists such as Dieter Roth and Ed Ruscha, started creating art books in democratic multiples, 500 to 15,000 copies at a time. These were conceptual, not fine art books, perfect-bound, offset printed, “art for the masses.” Iconic examples include Yoko Ono’s The Grapefruit Book, Marcel Broodtheaers’ Un Voyage en Mer du Nord, and photographer Ruscha’s Dada-esque Twenty Six Gasoline Stations, and The Royal Road Test. (The latter is prominently featured in the just-released California Typewriter documentary, from American Buffalo Pictures.)

Ruscha’s, Broodthaers, and Ono’s books are now sought-after collectibles. So are rare surviving examples of livres d’artistes. Meanwhile, fine press books from presses such as Black Sparrow and Yolla Bolly—usually letterpress printed, beautifully illustrated and bound, are another iteration of art books. And there are conceptual artists such as Ann Hamilton who create one-of-a-kind “altered books”—sculptural works made by carving or augmenting existing bound volumes.

Thompson, who recently exhibited at the Art Expo, and sells from a large collection of Post-War and contemporary era books, hosts salons at his studio in Streeterville, to familiarize collectors with the art and artists of the book world. The most recent salon featured books from his “Purely Conceptual” show.

His advice to those interested in starting a collection: “Just as you would with collecting paintings, find out what artists and styles interest you most, and why. Start there and your interest and collection will grow.”