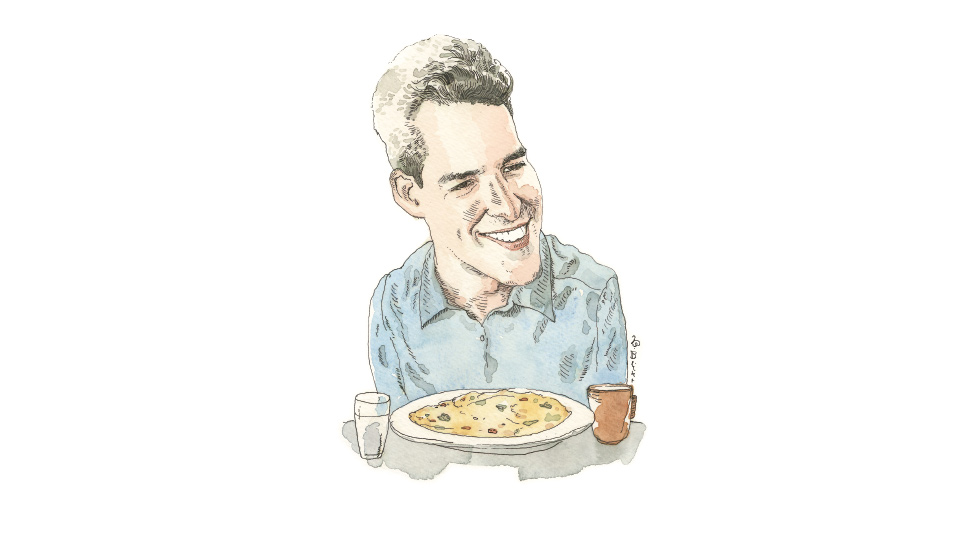 Evanston’s own State Sen. Daniel Biss remains hopeful for a shot at the Democratic nomination to run against Governor Bruce Rauner for the state’s top seat. ILLUSTRATION BY BARRY BLITT

The book, Juggling for the Complete Klutz, came with three beanbags. State Sen. Daniel Biss (9th district)—an Evanstonian since 2006, a former state representative (17th district) and a Democratic gubernatorial candidate—received it as a gift from his grandmother. But Biss did not have to report it to comply with the Ethics in Government Act.

“I became a fairly serious juggler,” recalls the 40-year-old, sitting across from me on a bench outside Sarkis Café in Evanston on a sunny Sunday morning last fall, months before his first campaign ads began appearing on local television. “I ended up juggling balls, clubs, flaming torches. I juggled at a local circus in Indiana a couple of times as a kid.

“Juggling and politics,” he adds with a smile, “are not dissimilar.”

The busy, nattily attired man, who had ordered coffee and a gourmet omelet, informs me of his plans for the rest of the day: meet with others later in the morning; drive to Springfield for a session to address a public-school funding plan.

The nature of the night before?

The complete opposite. Biss, his wife, Karin, and their two boys (Elliot, 9, and Theodore, 7) hit a beach to relax and observe meteor showers.

“We stayed there for about an hour,” Biss says. “Time with my kids has been precious since I announced my candidacy for the Democratic nomination for governor (on March 20 — exactly a year before the Democratic primary). “Kids digging holes in the sand… what a wonderful sight. Kids, at times, can be complicated, but they’re also loving and insightful and fun, always fun, to be around. Elliot is a passionate reader. He told me one day, ‘I figured out the problem with the Harry Potter books—the male characters always end up more important than the female characters.’ Then he said, ‘I don’t like that.’”

What Elliot’s father, the son of musicians and the brother of noted pianist Jonathan Biss, loved as a student at Bloomington North High School in Indiana: mathematics. He ended up commuting to Indiana University to take 12 advanced courses.

“I was obsessed with mathematics,” Biss says, adding some of the math students in his classes were homeowners and had spouses.

Biss earned a bachelor’s degree at Harvard University and a doctorate in mathematics at the Massachusetts Institute of Technology before becoming a member of the University of Chicago’s mathematics faculty at the age of 25. Biss’ technique was Inquiry-Based Learning (IBL), whereby his students were presented with scripts of definitions and theorems and attempted the prove the results. They then presented the proofs to their classmates, who critiqued the work under the supervision of Biss.

“By allowing the students to teach and explain in front of the class, they developed a deeper level of knowledge,” Biss says. “It was rewarding for me to see a class develop cohesion through IBL.”

After spending several years in the classroom and attaining the position of assistant professor of mathematics, Biss turned his attention to a field that had more to do with people than it had to do with numbers. Politics called.

“I felt an urge to get involved with what was going on in our community,” says Biss, whose state senate district includes Evanston, Glencoe, Glenview, Golf, Morton Grove, Northbrook, Northfield, Skokie, Wilmette, and Winnetka. “I started showing up at meetings, knocking on doors, talking to people, listening. I fell in love with the political arena.”

One of his most rewarding moments as an elected official occurred during his term as a state representative (2011-13). He championed groundbreaking legislation, giving private-sector workers access to retirement savings accounts through their workplace and making Illinois the first state in the country to enact such a program.

“There were 2.5 million workers in Illinois without a retirement plan, meaning most of them would have to rely only on Social Security and enter poverty after retiring,” Biss says. “The initiative was backed by both parties, at the state and national levels, but later died at both levels. I kept at it and felt strongly about it. Not all will join the program and benefit from it, but at least it’s an option now.”

Biss is concerned about the shrinking middle class; retirement security is one way to rebuild it.

“People are incredibly hungry to turn Illinois around, and that’s one of the reasons I’m running for governor,” Biss says. “People and businesses are leaving our state; our state has become a national punch line. I want to change that perception. And a way to do that, or at least start the process, is by saying, ‘Let’s get it together and let’s come together.’”

Before deciding to run for the Democratic nomination for Governor of Illinois, Biss sat down with his wife and children for lunch at home and made two lists with input from all. One described the good things that could come from running, and the other described the potential bad things.

One of the fears on the bad side: “See less of Daddy.”

But the good outnumbered the bad for the former college math professor.

Biss was all-in, not all-integers.

“My family means so much to me, and I felt it was important to get together with all of them on that day in December,” Biss says. “My wife has been great from the beginning. Intelligent, a desire for social justice, an appreciation for the arts, fun to be around—she has all of those qualities. If I’m considering something involving my campaign, I discuss it with her. I value her feedback and the way she sees things. She often opens my eyes to what else is out there, presents a broader perspective. That’s a gift.”