Standing at the east end of Dempster Street on a very cold Evanston morning, there are no cars in sight; the wind actually whistles and the blue light from the street lamps makes it chillier still. But just a little farther, stretched two storefronts wide at the alley’s edge, a warm glow beckons. There, the steamy windows of Hewn Bakery light up the not-yet-dawn, and the smell of fresh-baked bread curls out so thickly, you could swear the clouds of scent are visible, changing all that blue to gold and red and brown.

“The bakers have been at it since 10 p.m. last night. We have two bakers working through the night, and they’re joined by more at 2:30 a.m.,” explains head-baker Ellen King, who founded and launched Hewn with partner Julie Matthei in 2013. 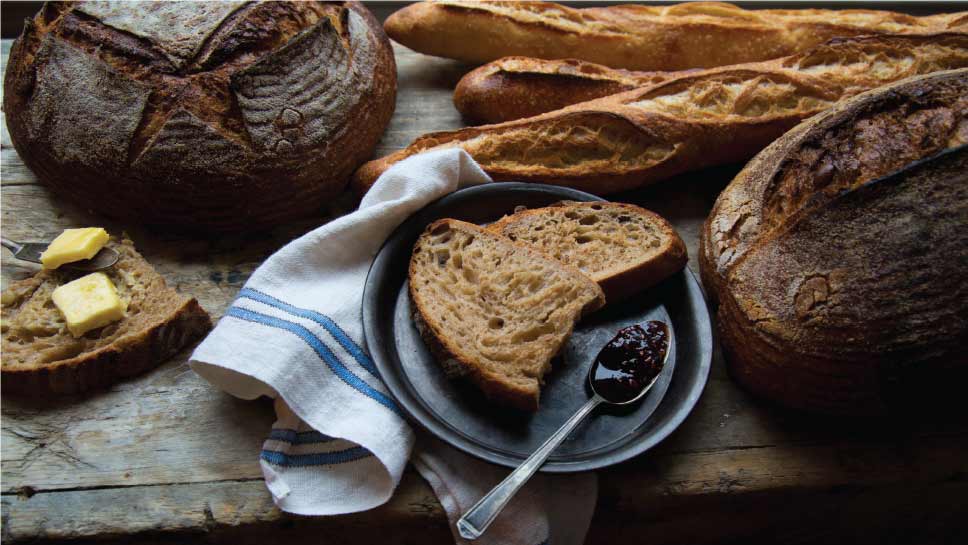 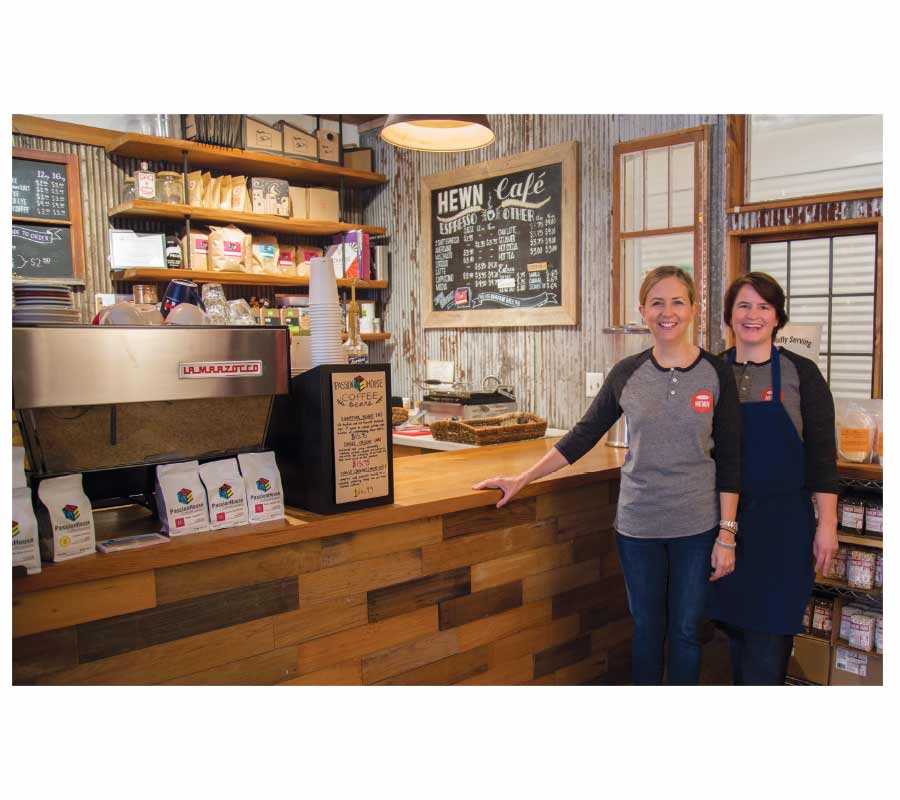 Early rising is the baker’s métier, a way-of-being King has embraced for more than a decade, going back to the days when she started her Underground Bread Club in Evanston, delivering fresh-baked loaves from the back of her bicycle, with son along for the ride. Even then the loaves King baked—the country bread, the caramelized onion rye, and the country cheddar, for example—were made with levain—a naturally-fermented starter, and whole-grain flours. “But did I realize it would lead to this? Not at all!” she laughs.

The “this” King references is an entrepreneurial bent to baking that fits so well in Evanston, a place known for historically-conscious, socially-minded, forward thinkers. The breads, pastries, and sandwiches Hewn makes attract the general public, and a growing array of wholesale clients, who purchase Hewn products for sale in their own restaurants throughout the North Shore and Chicago. Hewn now supplies Farmhouse, The Barn, Found, The Peckish Pig, Backlot Coffee, Hearth, and the Other Brother in Evanston. Hewn baked goods also go to Avli in Winnetka, Valor in Glencoe, and Inovasi in Lake Bluff. And in Chicago, you can find them at Vincent in Andersonville, David Burke’s Primehouse in the James Hotel, Wyndham Hotel on the River, Sweet Greens national salad chain, and coffee houses including Ridman’s Backlot, Metric, and Passion House. 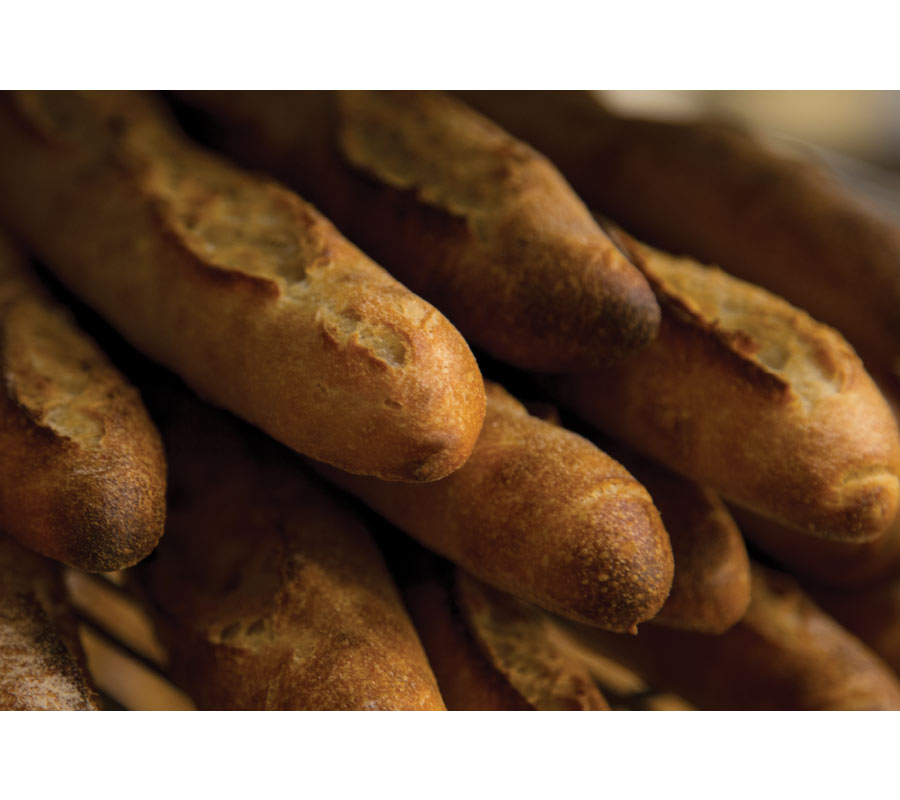 The baked goods not only taste good, made with ancient and heritage grains that are digestible by people with gluten-intolerance, but they are part of King and Matthei’s larger aim to revitalize the grain economy in the Midwest. It’s a passion King writes about at length in her Hewn Heritage Baking cookbook due out from Chronicle Books, Fall, 2018.

“You have to understand,” explains King, “that by the mid 1800s farmers were at the mercy of the grain elevators who set prices for the grains. Farmers were growing heritage grains, but started losing their connection to them, as all qualities of grain were combined together at the elevator. So, over time, farmers started buying commodity seeds and relying on pesticides to increase yields. By the time World War II was over, high-yield was so important, farmers could no longer compete with organic practices and heritage grains.” 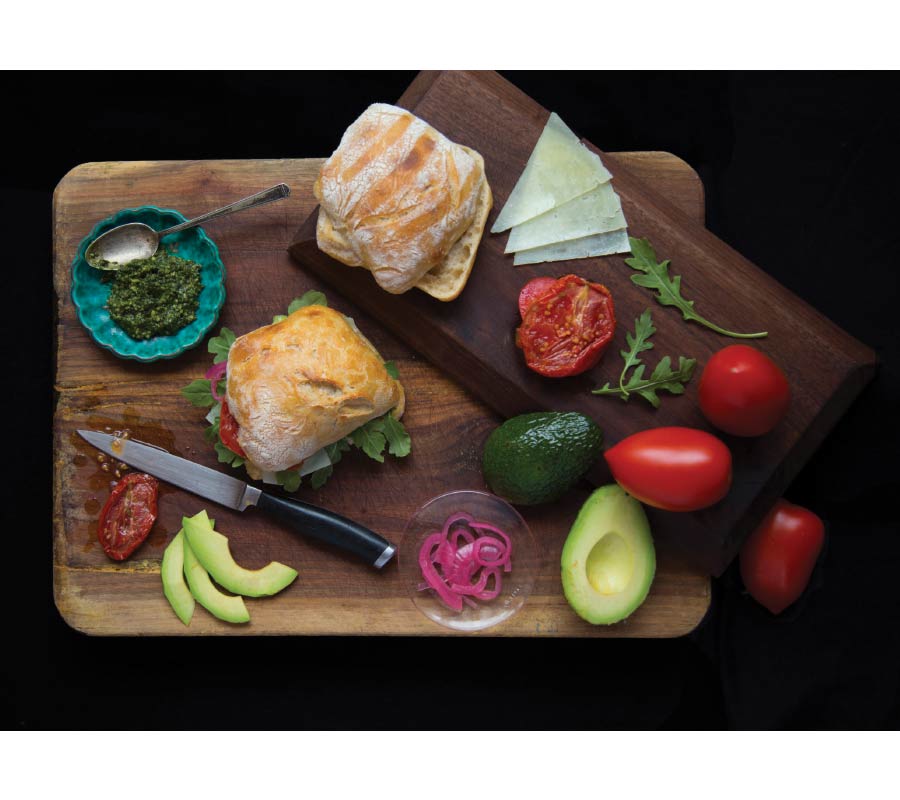 Selection of local cheeses and sandwiches.

But over the last several years, some farmers have been working to bring better grains back in to production. Helping this along in Illinois, Harold Wilken of Janie’s Organic Farm, which supplies Hewn with turkey red wheat flour and other varieties of wheat, just completed construction of the first large stone mill to be built in Illinois in 80 years.

“It’s now once again possible for a special grain to stand alone—to keep the integrity of the ‘where’ and the ‘how’ grain was grown,” says King. To get there, “People like Wilken and farmers such as Andi Hazzard, of Hazzard Free Farm, and the Wepkings of Meadowlark Farm, who are taking the risk to grown these grains, are the real heroes,” says King “We are finally getting to a place where we are reconfiguring the flow of product, eliminating the grain elevator, and instead, connecting the farmer directly to the baker and the consumer.” 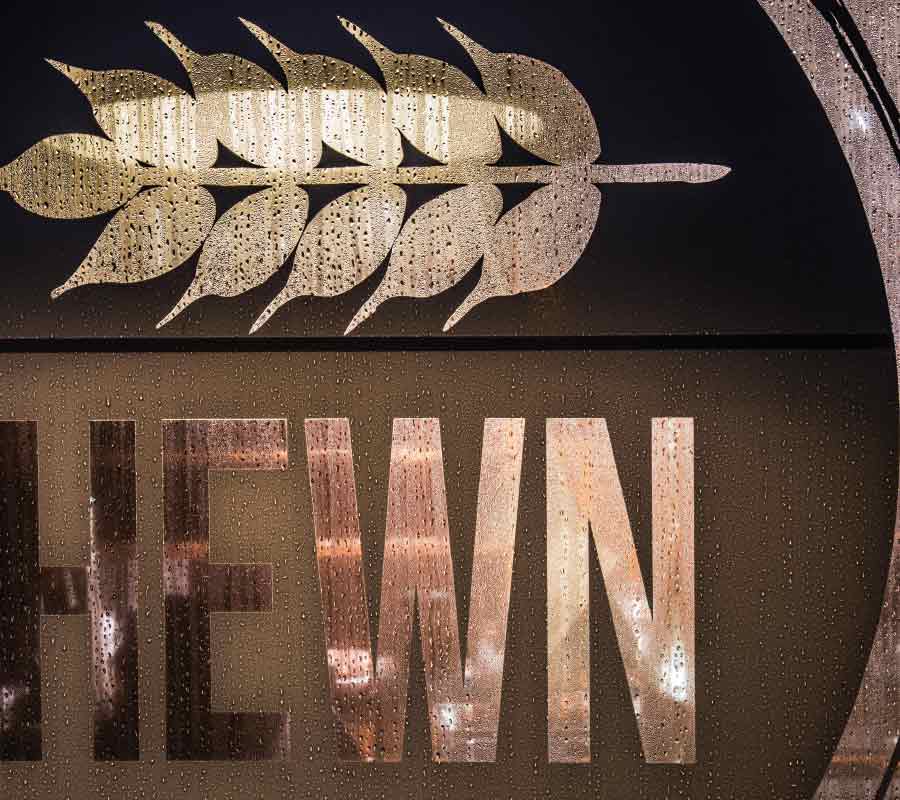 Marquis wheat, for example, an all-but-extinct heritage grain that farmer Hazzard learned about from a North Dakota college professor who had a kilo of it stashed in a drawer, is now being grown by Hazzard, and baked into two varieties of bread at Hewn. And Hewn’s Midwest bread, includes a mix of 50 percent einkorn, 30 percent spelt, and 20 percent Glenn or Red Fife wheat.

Currently, Hewn bakes 15 kinds of bread and 30 types of pastry and specialty items—including several of the recipes King made when she was peddling from her bike at the start. All of the breads are naturally fermented without commercial yeast, allowing a richer more complex flavor to develop. Of them all, the country and featured heritage-grain breads sell best. About 80 percent of Hewn’s sales are retail, but sales to restaurant and wholesale clients are increasing. 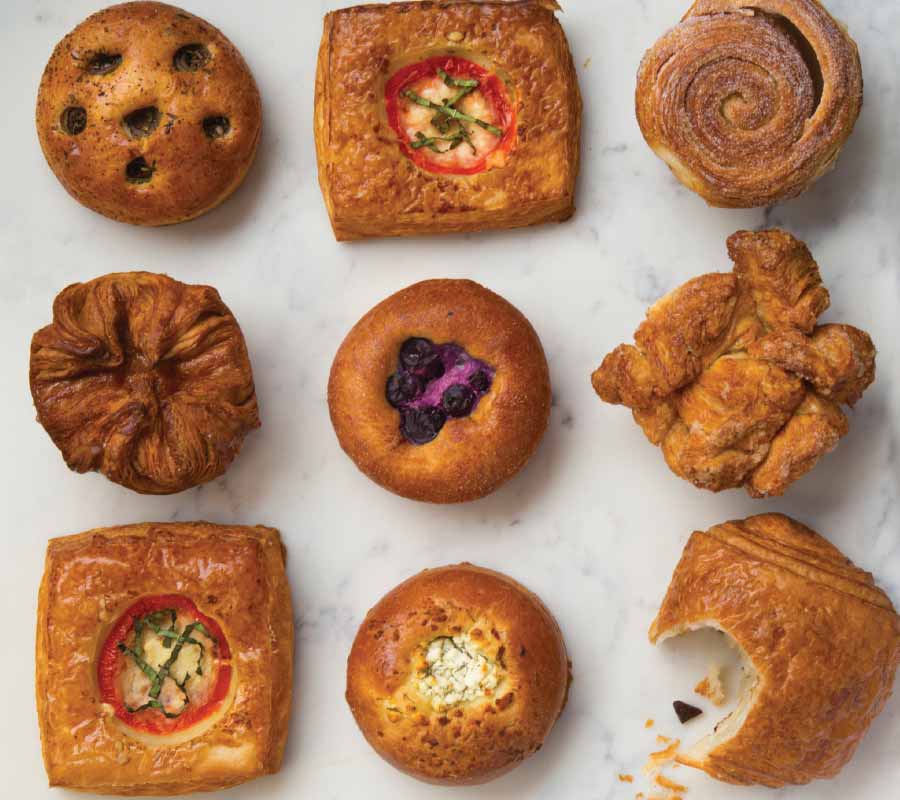 Informing the food connection, King is not only a baker, but a chef. Putting that training to good use, Hewn includes a selection of fine local cheeses and a rotating offering of fresh-made sandwiches made with produce from the local Talking Farm in Skokie.

For its first three years of business, Hewn occupied one storefront. Expansion into the adjoining space gave more room for the retail displays and coffee bar, but more importantly gave Hewn a larger kitchen. With plans to grow again soon, Matthei and King are scouting locations for an additional space.

“We don’t know exactly what or where it’s going to be,” King says, “but the focus will continue to stay on sourcing locally grown grains, dairy and produce, and producing naturally fermented breads.”