I have been told that this is some sort of dining issue. First of its kind for this magazine. I’ve also been told I should venture out and investigate at least one of these wildly popular new establishments for myself.

“Your choice,” the cheeky editor declares, as if I have even the foggiest idea of what this whole 21st century obsession is about.

In my day, one only dined outside of the family home when traveling, or when celebrating a special occasion. There were certainly restaurants at hotels and such 160-something years ago when Evanston was being founded, but the very notion of gallivanting from dining hall to dining hall, night after night, for no real reason (other than to impress friends and neighbors on the world wide web) seems quite excessive, if not gluttonous.

Still, I agreed, choosing a location that has been around nearly as long as I have—the old 1883 Borden Condensed Milk horse barn. 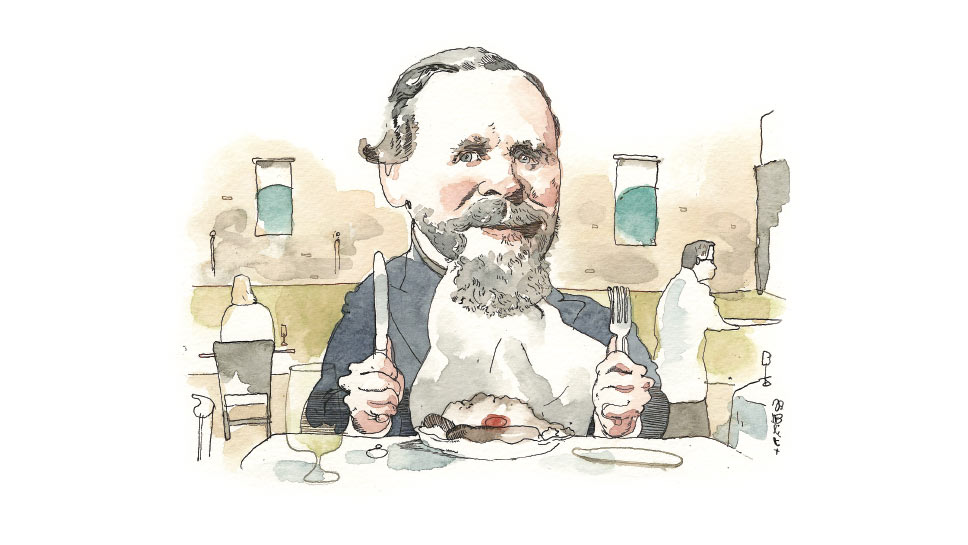 An exploration of the history of restaurants in Evanston through the eyes of John Evans. ILLUSTRATION BY BARRY BLITT

The idea of fine cuisine being served in such a building seemed almost preposterous. Then again, many things in this modern time would have been inconceivable to my colleagues who were more duly engaged in the word of God and sanctified learning than sommeliers and starters.

Undeterred, I made a reservation for one, notebook and pen in hand. A fiery lantern beckoned from the street into the alley, where I walked past a mysteriously enclosed terrace with outdoor fires and outdoor seating—in the middle of November!

Of course, I chose to eat inside. It is almost winter, and the brick walls and flickering candles were oddly enticing (almost like that speakeasy my friends tried to shut down nearly a century ago). A young woman brought me two separate menus (one just for spirits!), an amber goblet of water, and a soft bread roll. In return—to adjust to the current century mores and forward-thinking sociopolitical landscape (and indicate how far I have come since the early part of 2017)—I ordered myself a whole bottle of Pinot Noir from Germany (the one the sommelier said tasted just like burgundy).

It was quite nice, all of it. I enjoyed the wine (sorry Frances) and I enjoyed the 16-ounce ribeye and chatting up the other patrons about my imaginary assignment. Much like everything else in Evanston, there is no shortage of opinion.

Some long-time residents lamented beloved restaurant closings, making long-winded testimonies on the glory days of such gone-but-not-forgotten fine dining establishments as Dave’s Italian Kitchen, Davis Street Fish Market, Trio, Dixie Kitchen, Pine Yard, and just weeks ago, Tommy Nevin’s Pub. One woman spent 15 minutes telling me how much she missed the salad dressing at Fanny’s on Simpson Street. Another praised the day Blind Faith Cafe came to town in the fall of 1979.

Others still engaged my attention for excessive periods of time about the “new” Evanston food scene, dropping names like Morton (owner of this barn establishment) and Huston and Schaps and boasting about how all their friends in the “city” are flocking to Evanston for everything from gourmet ramen to Aloha Poke bowls. It was a bit much.

I prefer my simple steak, honestly. (With Bearnaise sauce.) But to each their own, as they say.

Despite my reluctance to reward hedonistic indulgences such as the consumption of delicious wine and delicious food for no good reason other than it’s, well, available, I suppose this whole “foodie” nonsense is good for the local economy.

And that’s one truth that transcends time.

Encouraging new businesses and the dollars they bring to town has always been a priority, whether it be the Homestead Hotel on Hinman in the 1920s or the Borden Condensed Milk factory some 134 years ago.

My adventure ended with the presentation of a dessert menu, and another choice.

Not only did I finish the assignment, but I found my next long-awaited post for the Instagram.