Dan Noonan has written a play, Blue Over You, and it seeks to answer the question, “Where’s Mitzi?”

Mitzi’s husband, high school drama teacher Francis, comes home one day. Mitzi is missing. Maybe she couldn’t take Francis’ childish ways anymore. Maybe she ran off with the dreamy maintenance man because she knew her marriage was irreparable. Maybe there’s something much darker at play.

“It’s a mystery and a love story, with a dollop of humor,” says the 50-year-old Noonan, an Evanston resident who grew up in Skokie and first tried his hand at scriptwriting in Wilmette—as a Loyola Academy student. “I’m totally excited about it going before an audience, this journey, this one-man show. It’ll take the audience on an interesting ride.”

The one man in the show is highly regarded Chicago Equity actor Michael Joseph Mitchell, who received a Jeff Award nomination for his work in Underneath the Lintel at City Lit Theater in Chicago. 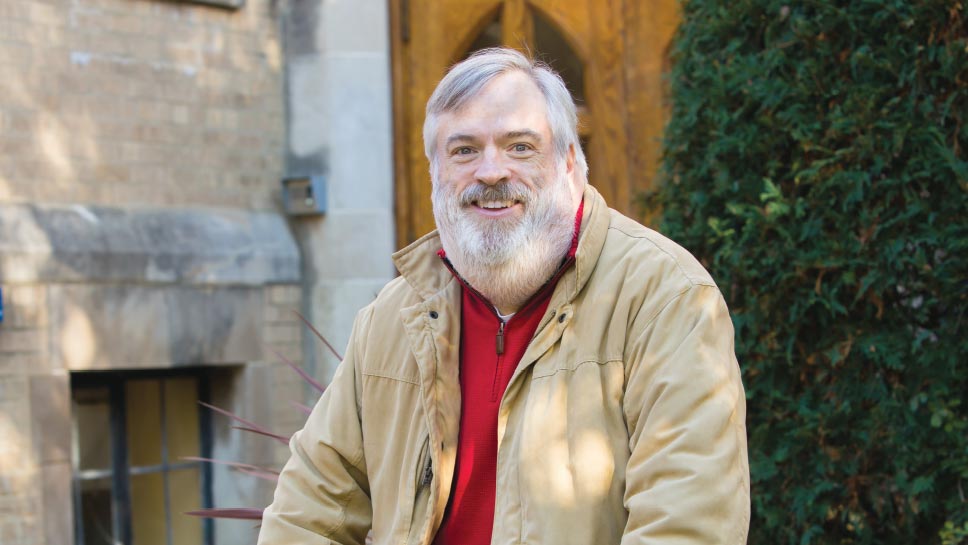 Dan Noonan is feeling cheerful about Blue Over You. PHOTOGRAPHY BY ROBIN SUBAR

Noonan had the world premiere of Blue Over You in mind when he formed Spot On Company with Blue Over You director Sarah Whitney. It will be staged—on weekends in January, beginning on January 5—at Northminster Presbyterian Church in Evanston.

Whitney supervised box office attendants at Goodman Theatre in Chicago. One of her underlings in 1993 was Noonan. They worked together for six months.

“Many years later,” Noonan recalls, “I’d written a play, to be performed by five actors, for a Deadline Workshop at Chicago Dramatist [The Center for New Play Development]. One of the directors there was Sarah. I didn’t know Sarah was a director, and she didn’t know I was a playwright. Sarah is a phenomenal person, a great director and collaborator. She does wonderful work with new scripts, developing and shaping story arcs and giving playwrights really good feedback. Comedy is another one of her strengths as an artist.”

Noonan grew up with a serious health issue. He was born with severe hemophilia and became HIV-positive after a blood transfusion at the age of 13. His play, Out Among Dragons (also directed by Whitney), is about an HIV-positive hemophilic looking for love in his doctor’s office. Two other characters in the 2005 play are also HIV-positive.

Many of his characters have either a disability or a chronic health issue. Audiences don’t just leave Noonan plays with a better understanding of the challenges afflicted people must face; the theatergoers often exit with more compassion, too.

Noonan met his future wife, Anne, on the set of Chicago, a musical performed at Boston College, where he majored in theater and political science. They have been married for 18 years and have three children (Seamus, 14, and 11-year-old twins Brendan and Liam). Anne James-Noonan is the performing arts coordinator at New Trier High School.

An early public reading of Blue Over You received a standing ovation at the Dayton Playhouse FutureFest two years ago.

“Michael Joseph Mitchell has been working on (the character) Francis since the beginning,” says Noonan, who started writing Blue Over You nearly 10 years ago and first submitted it for a reading in 2015. “I’m thrilled he’s portraying Francis; a real coup for us. He’s versatile, incredibly funny, in demand.”

Noonan’s major influence in the entertainment industry is James L. Brooks, the Academy-, Emmy-, and Peabody-Award-winning television and movie director, producer, and screenwriter. He wrote screenplays for Terms of Endearment, Broadcast News, and As Good as it Gets (with Mark Andrus), among many others.

“I like the idea of people, who have busy lives, taking the time to sit in a theater space and see one of my plays. And I love the opportunity to make people in an audience laugh or cry or think.”

Blue Over You runs January 5 to 28 at Northminster Presbyterian Church, 2515 Central Park Avenue, in Evanston. Performances are Fridays and Saturdays at 8 p.m. and Sundays at 3 p.m. Tickets are $20 to $25 and can be purchased through blueoveryou.com.