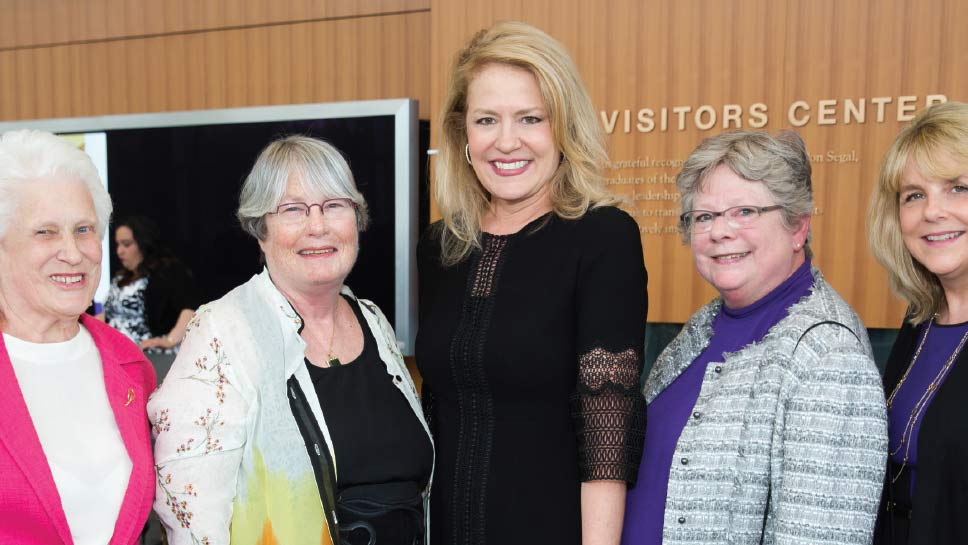 For 125 years, Northwestern Settlement House has been changing the trajectory of Chicago’s disadvantaged families by nurturing, educating, and inspiring them. – North Shore Settlement House Board alumna Nancy Seibold attends a recent event with members of the Evanston Auxiliary Board Holly Sunshine, Anna Atkinson, Zoe Barron, and Christine McQuinn. The boards work around the year in support of House in the Wood.

Several years ago, when Tony Perry, president of A. Perry Homes, moved his architectural and construction business to the North Shore, he was looking for a local philanthropic partner that his company could support.

“A friend mentioned that I take a look at Northwestern Settlement House and the work they were doing in Chicago,” Perry explains. “The Northwestern Settlement’s mission is to end the cycle of poverty. It’s hard not to be enthusiastic about them when you see the kids they’re impacting, and so inspiring when you see all of the individuals who are giving their time and treasure to make Settlement House’s mission a reality.”

Perry, as Chairman of the Board for Northwestern Settlement House, can count himself among the organization’s most dedicated volunteers, who have helped it reach its 125th anniversary of changing lives of Chicago’s families through education, social services, and the arts.

Northwestern Settlement House was founded in 1891 by Northwestern University as a separate, financially independent institution intended to help a needy community by recruiting its faculty, staff, graduates, and volunteers to live and work at the house and empower the community to change their own lives. It is still located where it was originally founded in West Town, on Augusta Boulevard in Chicago.

“What hit me from the beginning is that the Settlement House is giving tools to people so that they can help themselves,” Perry says. “This isn’t a temporary stop gap where we meet a need and send them on their way. Settlement House offers them opportunities, takes them out of their comfort zones, and shows them what can be possible. It makes the world theirs. It makes the world accessible.”

Today, Northwestern Settlement House offers programming that touches one’s life from before they are born (with pre-natal care) until they are senior citizens in need of support, including:

House In The Wood, is Northwestern Settlement’s residential camp and outdoor education center in Delavan, Wisconsin. This summer camp provides Chicago’s low-income youth with opportunities to learn and develop healthy lifestyles, and be immersed in field science and math experiences in an inspiring outdoor environment during summer camp, and STEM-based outdoor education classes during the school year.

Food Pantry and Family Support, Northwestern Settlement operates the most accessible food pantry in West Town, providing 400,000 pounds of food and 10,000 pounds of clothing to 2,500 families annually. The program also provides clinical aids and diabetes screening along with wellness checks to hundreds of neighbors.

AmeriCorps Project Yes! is an AmeriCorps program connecting 30 new college graduates with youth in and around West Town each year. Members serve the community through mentorship, educational, service, artistic, and recreational activities. The goal of the program is to support students’ academic achievements, provide alternatives to destructive behaviors, and foster an ethic of service in the entire community.

Family CARES Center, a community-based family counseling center—in partnership with Childrens Home + Aid—was just launched this past June and will have five therapists and a clinical coordinator seeing hundreds of children and families over the course of each year.

“Settlement House has a ton of programming,” adds Perry, who commissioned the design of an organic garden on the rooftop of his office building to harvest produce for Northwestern Settlement’s Food Pantry, “but everything they do, they do very, very well.”

Perry credits much Northwestern Settlement’s success to its leadership. Since 1981, Ron Manderscheid of Evanston, the organization’s president, has procured and advanced Northwestern Settlement’s vision and programming by growing its operating budget from $200,000 to $14 million and leveraging the strengths of his staff and volunteers to serve more than 20,000 neighbors annually.

“Ron is really hard guy to say ‘no’ to,” says Patty Johnson of Wilmette. Johnson, who will be recognized as the 2nd annual Hall of Fame Honoree at the House In The Wood Gala on October 21, began giving her time to Northwestern Settlement House when she joined the North Shore Board in 1986. She has been the board’s president and chaired its annual House In The Wood fundraising events multiple times during her tenure, as well as Chairman of the Board for the Northwestern Settlement.

“What really drew me into the Settlement House was their notion of family,” Johnson says. “Their definition includes the people they serve, their full-time staff, and any volunteer who chooses to donate their time to one of their programs. I know their mission is to nurture, educate, and inspire but I’ve always appreciated how they’ve created this powerful extended family who lift each other up.”

The House In The Wood Gala is the North Shore Board’s signature fundraising event for the House In the Wood Camp and will be held at Morgan Manufacturing on October 21.

“House In The Wood is not just another summer camp—it is a year-round program for at-risk youth from the city of Chicago designed to disrupt the cycle of generational poverty by educating them with an outdoor STEM curriculum, nurturing them with social-emotional learning and counseling, and inspiring them with the beauty of nature in a safe environment with trusted adult role models,” says North Shore Board President Amy O’Donnell. “House In The Wood is critically important because it serves one of the most vulnerable populations in some of most violent neighborhoods of the city, using data-driven approaches to empower these children to break away from the dysfunction they encounter and create a new and better future for themselves.”

To learn more about Northwestern Settlement House, buy tickets to House In The Wood Gala, or to become a volunteer, visit northwesternsettlement.org.