Who would have thought that when Dustin Harris and Lea Pinsky met in guitar class at Evanston Township High School more than two decades ago, that today we would find them painting the town red—or in multiple colors to be exact.

“Dustin was a senior and I was a freshman,” Pinsky recalls. “That is a pretty big age difference in high school.” 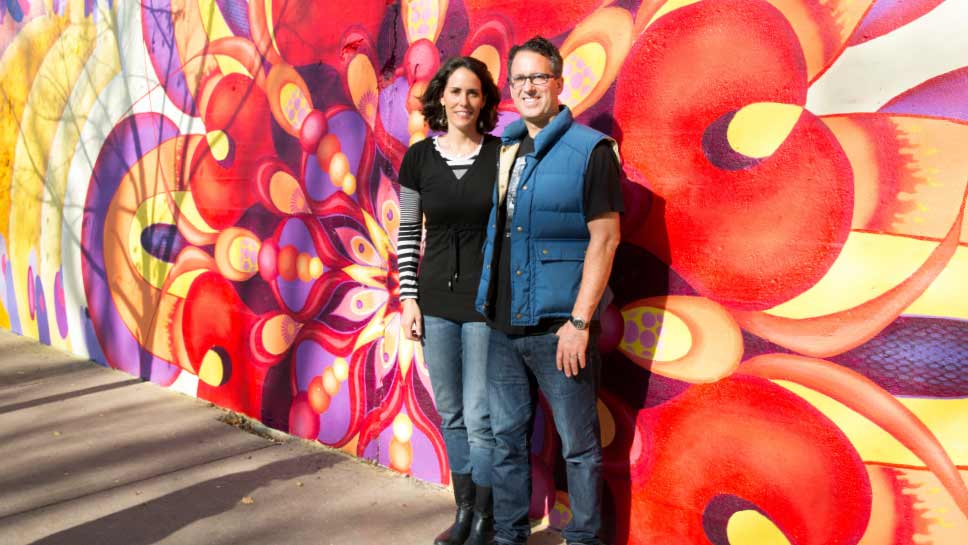 At the end of the school year, Pinsky couldn’t imagine not seeing Harris again. “She gave me her phone number,” recalls Harris. “Fairly bold for a freshman with braces. But even then, I thought she was so pretty.”

Fast forward 16 years to 2003 and the duo reunited when Pinsky was running an after-school program in Chicago’s Cabrini Green neighborhood. Harris’s mother was managing a similar program nearby. “Diana re-introduced us,” Pinsky says. “We’ve been together ever since.”

Partners in life, work, and art, the now-married Pinsky and Harris launched Mix Masters Murals in 2005, a company that creates large-scale mural projects for schools, churches, playgrounds, community centers, and cities in need of a pop of color. To date, the couple has created more than two dozen murals in Chicago and Evanston.

Pinsky and Harris are both accomplished artists in their own rights. In addition to being an arts educator and program manager with Art Encounter, Pinsky is a painter who is a three-time recipient of the City of Chicago’s Neighborhood Arts Program grant. She also won a portrait contest for the city’s Public Art Program in an exhibition on the Wacker Drive River Walk.

Harris is a professional DJ and artist. As an artist, Harris’s style focuses on graffiti-inspired painting and found-object sculpture, as well as occasional installation and traditional canvases. He has exhibited in galleries around Chicago, and had commercial work commissioned by Red Bull, Etnies, and Boost Motorola.

“We found a common ground in mural painting,” explains Pinsky. “Years ago when I was between jobs, Dustin had me help him with house-painting work. We found the work to be very meditative as a couple. That was the moment we began talking about painting murals together.”

The process of creating a mural is long—from community input, to design, to execution. In November, in the last days of Evanston’s Indian summer, Pinsky and Harris completed the Trust Your Heart mural on Church Street, just across from the Waste Management facility, painting 15 hours per week for five consecutive weeks.

“When we began meeting with the 2nd Ward about this project, we consistently heard that they wanted to communicate the heart and dream of Evanston,” Pinsky says. “We took their input and then applied these concepts in an abstract way that matched up with our aesthetic.”

In this most recent mural, Harris’s eye for complex line designs and action is evident, as is Pinsky’s interest in radial symmetry—in this mural, the mandala—where the design starts in the center and moves out of a calm and still energy. The mural also includes text, a treatment the duo likes to play with and incorporate when they can. “For Trust Your Heart, we took inspiration from old sign paintings,” Harris says. “I’ve always appreciated that art form and the precision of that hand work.”

Having created murals for more than 10 years, the couple says that their style has evolved. “We’ve been developing our aesthetic over time,” adds Pinsky, who has an innate sense of color that she says she inherited from her mother, Joanna. “Sometimes there are more figurative elements like people or more recognizable objects. In the last year or two, we’ve been interested in more abstract imagery, and we’ve just been going with that.”

While every working relationship has its challenges, Pinsky and Harris’s seems exceptionally harmonious. “I’ve never had a collaborator as close as Dustin,” says Pinsky. “In any creative collaboration, you might knock heads here and there. I think the saving grace is that we each have a different set of skills. He has a strong attention to detail and I’m more big picture. Our painting styles are also different. He works mostly in spray paints and I work more in brush paints. Dustin has more of a pop-art background and mine is more representational. We bring very different things to the table when we work.”

Harris and Pinsky hope to engage other local artists in large-scale projects around Evanston, a city they returned to to be close to their families and raise their young son. “That is the goal,” emphasizes Harris. “We’re not scared of big projects. We try to do at least one large-scale project each year. Each mural takes about 12 months from when we’re commissioned to execution. We’d love to oversee other artists as they bring their talents to the public art scene in Evanston. The power and impact of public art is great. I want to help Evanston become more vibrant than it already is in a positive way. Public art is for everyone.”

Their mural commissions have also helped Pinsky and Harris achieve another goal—a proper space to create their studio art. “I’ve always worked in my mother’s garage or some other found space,” says Harris. “With all of the work we’ve done, we’ve been able to purchase a proper studio. We finally have a proper space to work.”

Enthusiastic about the opportunity to consistently work on their studio projects, Pinsky and Harris plan to show their work at Evanston’s Space 900 later this spring.

When asked if Pinsky and Harris’s 6-year-old has helped in painting any of their murals yet, the answer is “not yet. But he does love to drive around with us and point out where he thinks a mural should go,” Pinsky adds.