Lynn Orman Weiss’s Women Of The Blues: Coast To Coast Collection is a hit. Her vision of assembling the work of 16 photographers’ photos of 50 dynamic Blues performers whom she met during her 20+ years as publicist, producer, promoter, writer, and storyographer at concerts, festivals, and clubs has come to fruition. The inaugural exhibit at Firecat Projects Gallery on the northern edge of Chicago’s Bucktown was timed perfectly to coincide with the 2016 Chicago Blues Festival and has generated enthusiastic responses from art and music lovers alike.

“This was a magic moment to have the photos in one place and to see my idea come to bear,” enthuses Orman Weiss, Chicago Blues Hall Of Fame and 2016 Blues Woman-of-the-Year. “My dream is for this exhibit to capture the heart of the observer and give them reason to find out more about these extraordinary performers.” 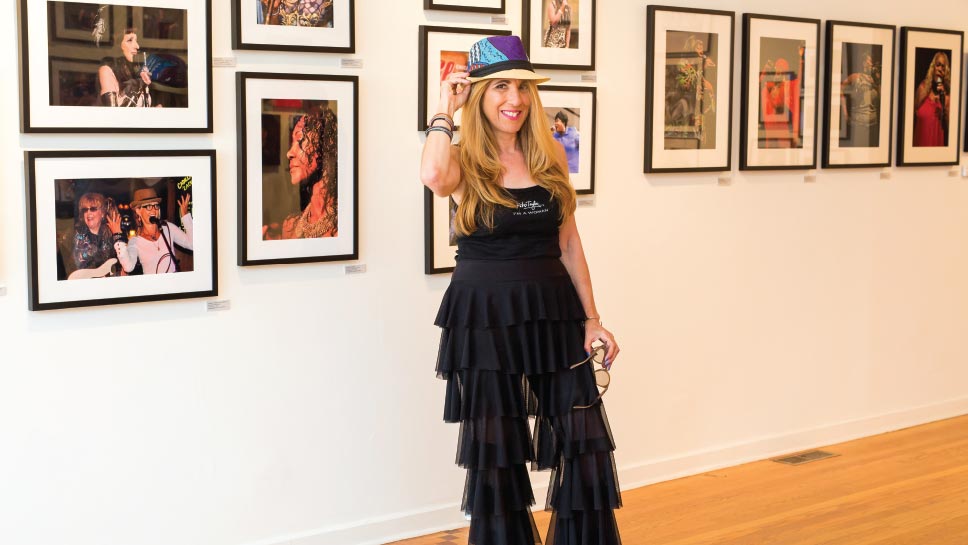 Women Of The Blues: Coast To Coast Collection is a testament to the rich history of women in this American art form. PHOTOGRAPHY BY ROBIN SUBAR

Orman Weiss knows and admires the work of every one of these performing artists and feels they are among the most genuine practitioners of the blues form. Among the lively images are Shemekia Copeland igniting a crowd, Nellie “Tiger” Travis captured in a Blues revery, “Daughter Of The Blues” Shirley King commanding the stage, and “Granddaughter Of The Blues” Tomiko Dixon singing her own patented Blues style. Covers featuring women on Living Blues Magazine and Big City Rhythm & Blues Magazine are also included, bringing the exhibit to 60 photos in all.

As a simple photo exhibit, it is unique and powerful, but as a means to ignite the conversation of women’s place in the history of Blues Music, it is positively kinetic. “It is so important to tell the story of the women,” declares Exploring Chicago Blues author Rosalind Cummings-Yeates. “They are the interconnected web to the music and the men. From Memphis Minnie to Big Mama Thornton, Bessie Smith, Alberta Hunter, and the “Queen of the Blues,” Chicago’s Koko Taylor, this show is very important for the past, present, and future. This show is designed to travel as a tribute to Koko Taylor and the Sisters Of Royalty,” adds Orman Weiss.

Women and men alike in the Blues community are impressed by the talent represented in the collection. Guitarist Billy Flynn, who has played with Muddy Waters, says, “It is such a meaningful show. I have two daughters and it is essential for them to know the history of Blues and to know what role women have played in this American art form.”

Fifteen of the photographs were chosen from the exhibit and were featured on the Chicago Blues Festival Jumbotron, making them “…a beautiful addition to the festival, adding the photographs of so many women who have graced our stage, the legends, and the rising stars,” adds Festival Director of Media, Mary May.

As a publicist for many Blues artists, Orman Weiss has forged strong bonds in the trade. With these contacts and friendships, her vision for Women Of The Blues: A Coast To Coast Collection has expanded. Future exhibits will include performance bookings at related venues.

“Showcasing the singers is an important aspect,” Orman Weiss says. “The Blues is a living and breathing art form with a continuing history, and women’s place in the Blues is as important as the men’s.” Academic forums by prestigious professors of Black Studies and Women’s Studies and noted authors on the subject of Blues culture will also be available.

The show has generated interest as a traveling exhibit and now includes a prestigious 2017 booking at The National Blues Museum in St. Louis from January 7 through National Women’s History Month in March.

Orman Weiss’s music connections were forged from a childhood on the South Side of Chicago where her father played in a jazz band. From Chicago, she made her way to Skokie, to Niles North High School, then on to Northern Illinois University for her bachelors, and finally to Columbia College for graduate work in the Arts, Entertainment, Media Management program. She produced the first Blues On The North Shore concerts at Evanston Space from 2008-2010, which were filmed and aired on 38 public broadcast stations throughout the US. Later, radio programming opportunities lead to her roles as producer and host of The Blues Show on Northwestern’s radio station WNUR, 89.3 FM.

These photos of Women Of The Blues practicing their stage craft takes art outside the museum. The exhibit’s dynamism serves as a catalyst for dialogue, community spirit, and cultural door openings, while reviving and refueling the depth of all of Blues music in the process.

The Women Of The Blues, Coast To Coast Collection is on display in the Duchossois Center for Advanced Medicine Skybridge at The University Of Chicago Medicine through December 12, 2016.