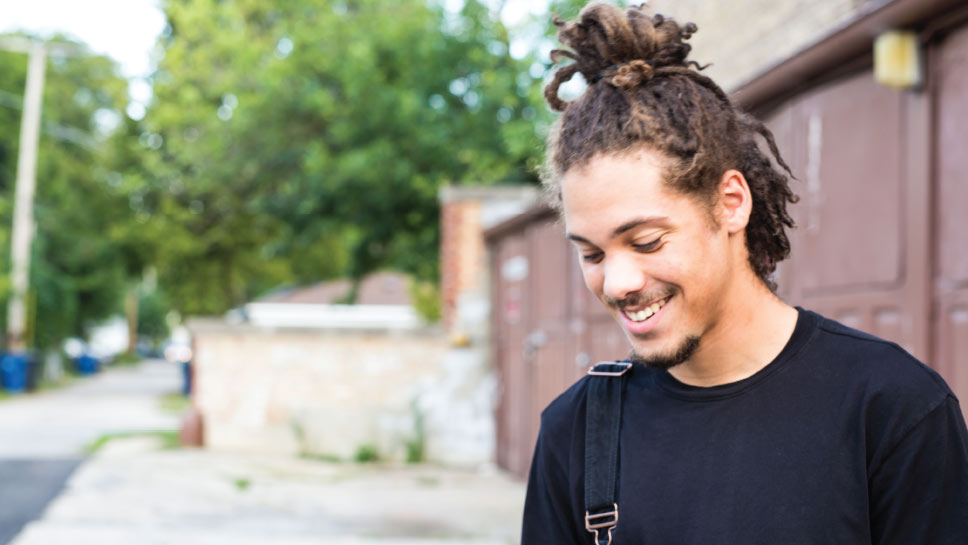 Evanston’s Kweku Collins paved his own path straight out of high school, and is now perched on the precipice of hip hop stardom. PHOTOGRAPHY BY ROBIN SUBAR

It’s the rare 19-year-old who knows exactly what he wants to do as a career. Even rarer, is the one that graduates high school and steps confidently into his or her field of choice. That’s Evanston’s Kweku Collins, bursting onto the hip-hop scene. He signed with management company Closed Sessions in Chicago just before graduating high school, and his seven-song EP, Say It Here While It’s Safe, and his recent full-length album, Nat Love, garnered rave reviews on sites like Pitchfork and publications like The FADER and Billboard. A couple of his tracks, “Ghost” and “Lonely Lullabies” are nearing the million streams mark on Spotify. This month, he sets out on his first European tour dates, and, in a few months, he’ll perform on live television on The Late Show with Stephen Colbert.

“Ninety percent of Nat Love was written from my bedroom,” says Collins. “I have a microphone that plugs directly into my computer. I run Logic [the music production program], I got some speakers, I have a keyboard. Then, me and my dad took a shelf, put soundproofing in it, covered it in blankets, and then we put the microphone in there.”

He uses this lo-fi approach to produce a really clean sound, pairing straightforward beats with synth, samples of acoustic instrumentation, and re-timed loops underneath a steady stream of evocative lyrics, vocal hooks, and memorable, catchy melodies. It’s rap, it’s hip hop, it has R&B leanings, a dash of reggae, and a solid pop sensibility. His sound implies a maturity beyond his years.

But he’s been at it for a long time. He first started writing his own lyrics six years ago, at the age of 13. He’d find the beats from his favorite songs on YouTube, just the isolated tracks without vocals, pull them into a user-friendly music editing program called Garageband, and rap his own lyrics on top of them. It wasn’t long before he was fleshing out the rest of the songs underneath the lyrics with his own beats and melodies.

“I like sparse [backing tracks],” Collins says. “I just love simple and dusty. That’s the stuff that I really respond to. I’m a simple dude. I don’t like glitz and glamour, and I try to treat my music the same way. We can get it sparkling, I can get it there, but to me, the best music is simple and soulful.”

Toward the end of high school, Collins realized he had a sound to sell, so he started pushing his work out to music blogs. At the same time, he sent one email to Closed Sessions.

“All the artists that I looked up to and saw doing amazing things, they all came through Closed Sessions at some point,” Collins says. “I just shot them an email. I was like, ‘I put this project out. I don’t want anything. I’m not asking to be signed. If anything, I know you exist, now, you know I exist. And they hit me back within three days, like, ‘This sh** is awesome. What’s your goal? What’s the endgame?’”

After he signed with Closed Sessions, he started getting more exposure. He made a music video for his single “Stupid Rose,” which helps to convey his age a little better as he skateboards though town, hangs out with friends, and sits on a curb, eating tacos from a taco truck. He played a tour through the Midwest before heading out to New York with his manager for a press run, culminating with an interview on Real Late with Peter Rosenberg, a venue known for highlighting up-and-comers.

One of Collins’s tracks, “Kings,” was recently chosen as the soundtrack to represent a current arc of the Marvel Comics character Black Panther, written by Ta-Nehisi Coates, in a recap video on Marvel Entertainment’s YouTube channel.

All of this has happened in just over a year. Evanstonians that want to see Collins work his magic live can get tickets to a show at Thalia Hall on October 20, his last area show before he heads off to Europe.

“I always told my homies and my parents, ‘If music doesn’t work out, then I guess I’ll go to college,’” Collins says. “Everybody told me, ‘Naw, dude, you gotta fix your priorities.’ But music worked. Right at the last minute, too. I was like, ‘See?’”