Evanston residents are in for a theatrical treat this summer. James Sherman’s The Ben Hecht Show will provide a look back at the glories of one of Chicago’s most respected newsmen of the early 20th century at the Noyes Cultural Arts Center.

Sherman, a founding member of Victory Gardens Playwrights Ensemble, has taken Hecht’s words—a legendary playwright and screenwriter in his own right—and placed them in an intimate setting. Here, Sherman talks about Hecht whose famed The Front Page is receiving a star-studded Broadway revival this fall. 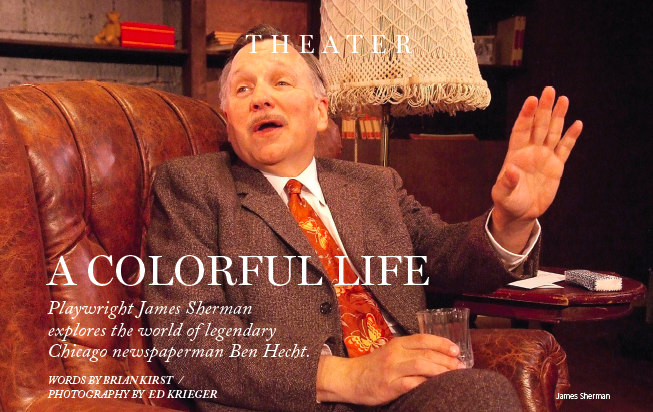 Evanston Magazine: What was your introduction to Ben Hecht?

James Sherman: Ben Hecht was a great writer. I’m a writer. I’ve been an admirer of his for a long time. He wrote The Front Page, one of my all-time favorite plays. I certainly knew of him as a famous newspaperman from Chicago.

How did this show come about?

I was doing volunteer work at the Chicago History Museum a few years ago. I came across a book in their library by Ben Hecht called A Guide for the Bedeviled. I started reading it and pretty quickly realized it was great writing and something that I wanted to do as a one-man show. I’ve never done a one-man show before. But I was particularly inspired.

Hecht had a home in Nyack, north of Manhattan. The premise of the show is that you, the audience, have come over and we’re going to have a couple of drinks and, as Hecht, I’m going to tell you some of these interesting stories that I have to tell.

Therefore, his own words form the basis of the show. I got the rights to use his actual writings. So, as I am doing this one-man show, playing Ben Hecht, I am actually using his words. I’ve compiled the whole thing from two books of his. I’m also using his autobiography, A Child of the Century. He didn’t have any living heirs. So, to acquire the rights to the material, I had to find out who controlled the estate. It turns out the Ben Hecht papers are right here in Chicago with the Newberry Library.

He was an incredibly diverse screenwriter. Do you have a personal favorite?

His range was amazing. He worked with Ernst Lubitsch on screwball comedies. He was one of the uncredited writers on Gone with the Wind. Nothing Sacred is a great screwball comedy from the ‘30s. He wrote the original Scarface.

Of course, there is always The Front Page, which was filmed a couple of times, and then later reworked as His Girl Friday. Do you have a favorite anecdote about him? He was born in New York. He grew up in Racine, Wisconsin. He went to college, literally, for one day. (Laughs) He didn’t like it.

He landed in Chicago, not knowing a soul. He’s 16 years old and ran into an uncle who introduces him to someone who gets him a job on a newspaper. His first job was as a photographer’s assistant. When there was a murder or death, it was his job to get pictures of the dead body. He made friends with everyone from politicians to ladies of the night.

It was a very colorful life.

The Ben Hecht Show runs from June 10–July 17 at the Piven Theatre at the Noyes Cultural Arts Center, 927 Noyes Street in Evanston, grippostagecompany.com.