Eddy Clearwater is a showman from tip to toe. Today both ends are clad in red. The hat, Clearwater says, came from Australia.

The boots? He doesn’t remember where. In between, Clearwater’s white suit and iridescent blue sunglasses complete a patriotic ensemble befitting his reception of the nation’s highest blues music award: a place in the Blues Hall of Fame. “I can’t quite wrap my head around it,” the 81-year-old marvels, rocking his lanky frame, knees poked upward like a teen on a too-small chair, hands so huge they make the guitar he’s holding look like a ukulele. “It’s like a beautiful dream. There are so many people that were so talented that just didn’t live long enough to receive this award,” he reflects. “I feel like this award is as much for the Magic Sam and Freddy King I carry with me, as it is for me.”

“And he did it with so much heart.”

“I give Eddy a lot of credit,” agrees Chip Covington, former owner of Chicago’s Biddy Mulligan’s where Clearwater played from the 1970s on. “Not only was he a good entertainer, he was very genuine in his relationships with people. He did everything he could to sell blues music to the crowd: Howl in an Indian headdress, hop like Chuck Berry, host Sunday night jam sessions where anybody could come up and play with him…terrible trumpet players, awful harmonica wielders…he was such a great sport. He understood that music is a participatory thing, that’s how it’s shared. Eddy didn’t play at people, he played with them.” 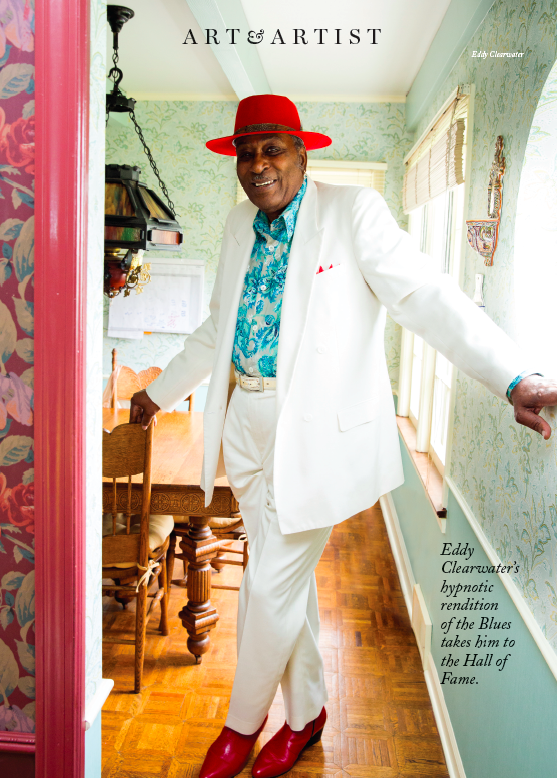 In the iconography of Chicago blues, Clearwater’s family pedigree runs deep. Born in 1935 to the Harrington clan of Macon County, Mississippi, Clearwater’s family gave the world blues performers such as harmonica player Carey Bell Harrington, his sons Lurrie & Steve Bell, and his uncle, fiddler Reverend Houston Harrington, who made the first recordings of Clearwater on his Atomic-H label.

Raised by his Cherokee grandmother, a very religious woman, Clearwater was surrounded with gospel music throughout his childhood. “I can still hear her voice,” he says, humming, picking out the chords to “Old Ship of Zion,” and then, singing the old hymn.

Those early influences prompted Clearwater to teach himself to play guitar (upside down and backwards!) and, before long, had him playing out, backing up The Blind Boys of Alabama and others. When he moved to Chicago in 1950, Clearwater’s first jobs were for gospel groups playing at churches.

As for blues beginnings? “When I was a kid, blues was considered the devil’s music!” Clearwater laughs, “Grandma let us play the blues and country and rock and roll on weekdays, but never on Sundays.” Clearwater’s blues abilities blossomed in 1950s Chicago through his friendship with Magic Sam, listening to Muddy Waters, and Sunnyland Slim, and playing with blues greats such as Otis Rush and Freddie King.

By the ‘70s, Clearwater—who’d taken the name Clearwater as a playful riff on Muddy Waters moniker—was regularly playing on the North Side. A second nickname, “The Chief,” title of his first American LP on Rooster Blues, came after Clearwater posed for the album cover sitting on a horse wearing an Indian headdress. More albums for Rooster, plus Blind Pig, Bullseye Blues, and his own Cleartone imprint followed, along with European releases. That all led up to Grammy-nominated Rock’n’Roll City, an album he did with Los Straitjacket.

He met his wife Renee Greenman, who is also his manager, over 20 years ago and the two have made a home in Skokie ever since.

“I love it here,” says Clearwater, who received Skokie’s first ever Art Legacy Award in 2007 and a Lifetime Achievement Award last year. But Clearwater still tours, and plans to keep touring through his 80s. Locally, he will be headlining the Chicago Blues Festival on Sunday, June 14, and will be a part of the all-star tribute to Otis Rush.

“What legacy do I hope to leave? I hope people remember me as somebody who spoke the truth,” he says. “And if I had to offer advice to this new generation of musicians, I’d say: Be honest and down to earth. And no matter how much you have, remember to always give something back.”