Activating the arts in a city so that people stumble upon art in their daily lives (at the dry cleaners, at the train station, at school pick up) is a huge undertaking. It’s something that is happening in cities like New York and Paris, where art is everywhere, so why not in Evanston? And although activating year round is ambitious, 30 days of activating art is feasible, at least it is to a group of arts advocates who are laser focused on making it happen this June 3-30 during the event Evanston Made. Evanston Made is both a new and old event.

In June 2014, the Evanston Arts Council worked with a group of arts volunteers and advocates to host the first annual artist studio tour in Evanston named Open Studios Evanston. Unlike Round the Coyote in Chicago, this tour could not to be done on foot as it spanned the entire city and required a map to introduce people to neighborhoods they had never visited. Event attendees were encouraged to pick up a map, choose a handful of artist studios to visit, support local artisans by purchasing work directly and attend pop-up events.

“Evanston is home to a high density of artists and creatives. We started out wanting to map out and showcase their studios. Now three years later, the event promotes more than 100 artists, and it will only grow from here,” says Jennifer Lasik, Cultural Arts Coordinator.

Now in its third year, the event has a new name—Evanston Made, a new exhibit venue—Evanston Art Center, more artist studios—1100+, a new timeline—all of June, and the participation of businesses across Evanston. Despite all of these changes, Evanston Made is sticking to its original mission to create opportunities for artists to engage with the community. 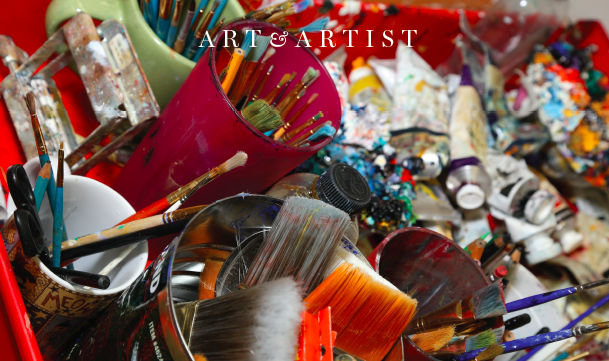 The Evanston Art Center (EAC) will host the exhibit Evanston Made: Works by Evanston Creatives June 3-30, with an opening reception on Friday, June 3 from 6-9 p.m.

“We’re thrilled to host this show of Evanston artists. A full-building takeover in June is our ideal celebration of the arts,” says Paula Danoff, president and CEO of the Evanston Art Center.

The first floor gallery will exhibit works by Evanston artists curated by medium (photography, painting, sculpture, etc.) and hung salon style given the volume of works. The second floor gallery exhibits works curated by artist Fran Joy, in a show called Moments, featuring works by Fran Joy, Jevoid Simmons, and Evanston Township High School art students. Moments introduces the concept of a theme, so there is a cohesive flow to the work shown.

“The works communicate how many of life’s decisions are made in the course of a moment,” says Joy. “The life of Tamir Rice was ended in less than two seconds and I want people to look into his eyes and think about the devastation of that moment. In the case of Jevoid Simmons, his father was involved in a momentary injustice leading to the movement of his father to the north and later the family as well. Simmons chronicled that migration for history and his own family’s heritage. These moments are worth notice.”

The second floor hallways will exhibit works created by residents of Over The Rainbow’s (OTR) Evanston location. In this new partnership, the residents, who live with physical disabilities, will be taking art classes at EAC during the months of March and April. The work from these classes will be on exhibit. “This collaboration with EAC will enhance the lives of our residents and provide the community a glimpse into the lives of those who live at OTR through the art they create,” says Jody O’Connor, Curator at Gallery OTR.

During the opening reception on June 3, Jennifer Friedrich, an Illinois Arts Council Fellow, performs a shadow puppet performance interpretation of Audrey Niffenegger’s story and illustrations of The Adventuress with narration by Jill Summers.

The Story of The Adventuress follows the dreamlike journey of an alchemist’s daughter who is kidnapped by a lascivious baron, turns herself into a moth, and flees to the garden of a charming butterfly collector named Napoleon Bonaparte. The story of how the two become lovers and how their affair ends in tragedy and transcendence, is told through Niffenegger’s spare prose and haunting aquatint etchings. With a stunning and distinctive visual style, this gothic romance packs the emotional heft of the world’s great fairy tales.

Evanston Made Pop Up

The lobby of the EAC is going to pop with shopping options. The Evanston Made Pop Up at EAC, staged by AnoMalY Productions, will sell work from artists of all levels and genres. “We’re creating an aspirational experience with this pop up—really demonstrating the interplay between seeing art, buying art, taking classes at the art center, and becoming an artist,” says Amy Amoroso of AnoMaly by Amy.

Each year has unearthed more artists participating in the studio tour, growing from 50 in 2014 to more than 100 this year, with studios in every neighborhood in Evanston. For many artists seeking exposure, hosting a studio tour is an effective way to build a network of people serious and interested in their work.

During the studio tours, artists are invited to showcase their studios like a mini-gallery with works on display, works for sale, and marketing materials to pass out. “This has been a really wonderful event for me. It’s a very nice, low key, and friendly way for me to show and sell my art. I’m excited to be participating again this year,” says artist Joyce Elias, who has participated every year.

With more than 100 artists opening their studios to the public, guest curators volunteered to design must-see lists.

“Navigating the large number of artists was a bit overwhelming last year, so this year I’m excited to be a guest curator focusing on affordable works for young collectors.” says Shannon Cahill, art consultant and buyer for Art en Object.

Artist studio tour maps will be available online and at the Evanston Made Opening Reception on June 3 at the EAC.

“As a Main Street business owner, I’m happy to participate,” says Louise Rosenberg, owner of Cultivate Urban Rainforest and Gallery. “There are so many makers and artists in our area, Main Street increasingly feels like a vibrant creative collective. I’m excited to showcase the living art pieces of Cultivate’s terrarium artist, Laura Mae Noble, among the artists of this community.”

“At the Brothers K Coffeehouse, I’m working to curate and coordinate some collaborative work to go on the walls,” says Jason Brown, also known as The Zip Code Kid. “In the spirit of Evanston Made, I hope to stretch my artist friends and our coffee-sipping neighbors to creatively re-imagine the everyday.”