Even those who have lived in Evanston for many years can be surprised at the stunning natural beauty that surrounds us. For a couple of Evanston transplants searching for a different home for their young family, the discovery of a dated Georgian house on the bluffs of Lake Michigan was like opening the door to a part of the city they had never seen before.

“It’s a really, really special place,” says the homeowner, a Massachusetts native and local businessman. “The house was very utilitarian but when I walked out to the natural bluff overlooking the lake, it felt like I was in Cape Cod. Even people who visit today say they never knew something like this existed in Evanston.” 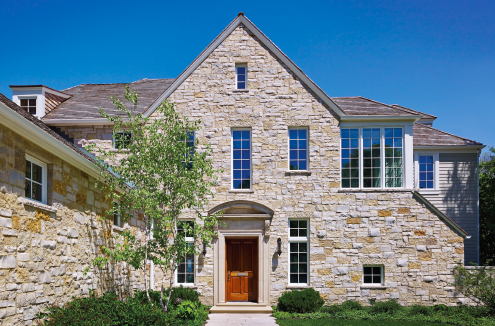 The couple, who has two young children, bought the house in 2010, and shortly thereafter concluded, after speaking with local architects, that the site was better suited to new construction than a major renovation.

But it took about two years before they would break ground on the breathtaking 5-bedroom home that sits there today—two years of careful planning and research led by the Evanston architect team of Stuart Cohen and Julie Hacker.

As the homeowner explains, the 6-bedroom, red brick Georgian had structural and soil issues they would not be aware of until they closed on the property. While the location on the dunes offered stunning views of Lake Michigan, it also posed significant problems for the foundation.

Never mind that the design aesthetic of the late 1940s was not the same as it is today. The ceilings were low at 8 feet, the layout was awkward, and nothing about the positioning of the rooms took advantage of the lakeside setting and accommodated the way families live in 2016. 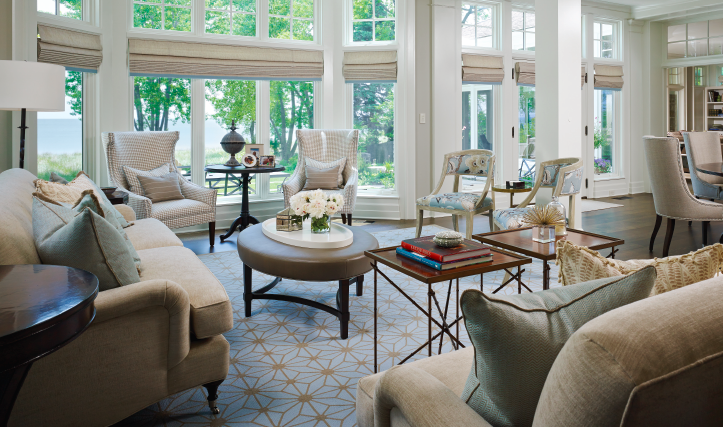 With the help of Cohen and Hacker Architects, the couple was able to preserve their favorite part of the original house—a front, rounded stone entry façade that evokes the look and feel of the neighboring homes that were built in this development more than 80 years ago.

“When the homeowner asked if there was anything we should salvage to use in the new house, we encouraged them to keep the stone entry,” says Cohen. “Stone entryways were a feature of many of the adjacent houses that had been built in the 1930s and it was important to us that the new house would relate to the adjacent homes.” 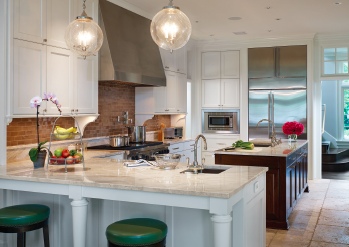 The homeowner says that he and his wife also loved the way Cohen and Hacker incorporated the natural landscape into the design of the new home. The result is a light and airy study in elegance, with creamy tones and rooms that take advantage of every aspect of the view.

In fact, the homeowner says at one point he and his wife were concerned they wouldn’t have enough wall space for their art—since so many rooms opened to the outside. 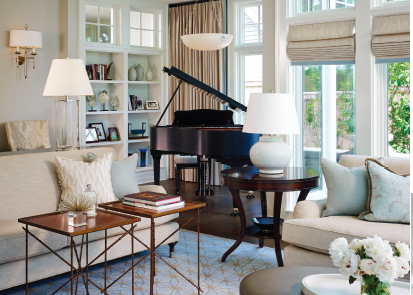 Cohen and Hacker have built their reputation on bringing lake views inside a home while maintaining the traditional architectural vocabulary.

“A house on the lake is all about the views,” adds Cohen. “Our houses have lots of windows offering views but we also create views through our houses so that everywhere you turn, there is something to look at.” 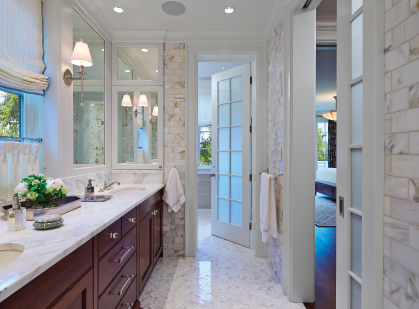 The homeowner says the family got everything they asked for, and more. They wanted a kitchen that opened to a family room that opened to the breathtaking “back yard” on the lake, which Hacker and Cohen delivered. They also wanted to incorporate the view with a coast feel—evocative of the homeowner’s childhood vacations in Cape Cod.

“This was a natural extension of the architecture we make,” explains Hacker. “The soft blues and taupes of the furnishings, as well as the palate of materials, were used to create the idea of an informal beach house. The more formal dark woods, used on built-ins, became focal points within the spaces and help define these spaces within the open floor plan.” 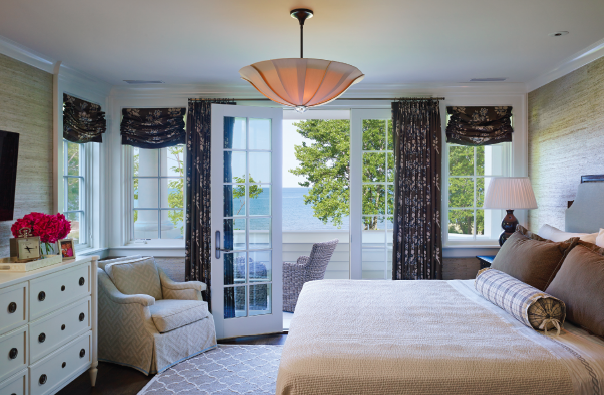 “We are so happy and proud to be stewards of this very special property in Evanston,” he adds. “And it is a nice feeling that long after we are gone this house will continue to add to the beauty of Evanston.”