There’s no question that some of the best fashion designers of our time come from Europe. Coco Chanel, Donatella Versace, and Stefano Gabbana are just some of the iconic brands that have been admired and collected over the years—and the next could be Grace Nowak.

The owner of Evanston’s new boutique, Grazia Studios, is also well on the way to making a name for herself with custom designed dresses, feminine business suits, and women’s coats that she first learned how to make while living in her native Poland.

At the time, Nowak had earned her degree in theatre and was working as a nonprofessional director, which initially kickstarted her interest in fashion. “We had to do everything, from choreography to making our own costumes,” she recalls, “and I found that I enjoyed costuming the most.” To this day, her favorite pieces are still historically inspired, particularly clothing from the Renaissance period.

The trademark flared sleeves and bodices were, in fact, recently part of her final student collection at the International Academy of Design in Chicago. “It won first place in our school competition,” she says proudly. It was a vindicating moment for Nowak, who, after moving to America 30 years ago and marrying and raising children, finally found the time to repursue her passion and enrolled in the Academy in 2009 to hone her skills as a designer. 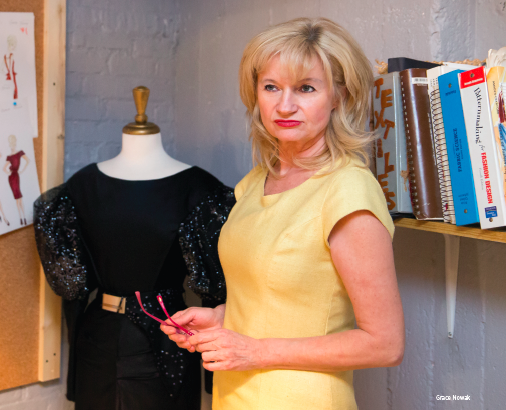 “Life can get in the way,” she admits. “But once my kids left the house, I asked myself what I really wanted to do, which was to be a designer, so I committed to it.”

True to her word, things have been moving at rapid speed for Nowak. Since graduating in 2013, she spent two years traveling Europe and interned at a high-end fashion house in London. It was here that she really began to cultivate her personal style as a designer. “All the ideas I have now come from Europe and how people dress there, especially Paris. It’s different than any other city,” she says. Evidenced in her current collection alone, Nowak has taken to a lot of those high-fashion trends with slim-fitting dresses, peplum jackets, and fur-lined cashmere coats made with imported silks and exotic brocade patterns. She also designs a small range of leather handbags to complement her outfits, all having the same agenda of making a woman feel feminine. “I like using a lot of simple lines for sophisticated pieces that provide a good silhouette,” Nowak admits.

In September of last year, she took her career to the next level by opening Grazia Studios (Italian for Grace’s Studio) on Grove Street, saying she chose Evanston for its multiculturalism and street traffic opportunities. “This is a town where I feel all different kinds of people come to relax and browse. I’ve had a lot of people stop by after seeing something in the window they like.”

After introducing would-be customers to her revolving spring/summer and fall/winter collections, Nowak also touts her custom-made services, which she says set her apart. “It’s hard to buy at stores sometimes. You shop and don’t like the design, or it doesn’t fit, or you just want something a bit different. So, that’s what I like to do for people, make clothing unique to them that makes them feel good.” Plus, she says, “You don’t want to ruin your whole evening by wearing something someone else has on.”

To that point, clients are also encouraged to bring in a picture of something in a magazine they’d like Nowak to replicate, which she is happy to do. “Wearing your own designs feels more valuable and timeless,” she says, admitting that’s an important part of her overall process.

“If people are spending good money, they should be able to wear the piece forever. Even in 10 years, it should still be in fashion.”

Even so, Nowak stresses that everything at Grazia Studios is very affordable. “I always look in magazines and see how expensive other designers are. I want to provide something that is unique and different, but also affordable.”

Nowak creates every item in the shop’s lower level where she works alongside her cousin, a formal bridal shop owner, who she has hired as a seamstress. “She’s much better at sewing than me,” Nowak jokes, further conceding, “I quickly realized I can’t do everything, I need to have help.”

It will be essential to grow her team in the future, too, as she hopes to be able to fulfill requirements to sell her wearables at other boutiques.

For now though, she says, “I’m taking it step-by-step. I’m still learning, but most of all, I just really enjoy what I’m doing and hope other people like it, too.”