Evanston painter Leo Segedin continues to discover new facets of his craft as he approaches his 90th year.

It is encouraging to ask an 89-year-old artist, “What’s new?”

“I just finished a piece yesterday,” states Evanston painter Leo Segedin. He is also at work on an essay about words and images that he will share in March at the Firehouse Grill, where on the second Wednesday of every month, upwards of 10 kindred creative types meet for lunch and share their work. 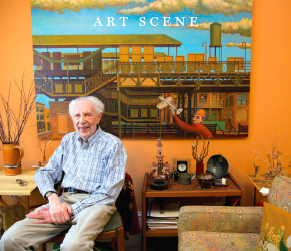 Last September, he transformed his three-story home, where he has lived since 1967, into a gallery for a retrospective of his work, which has been featured at the Art Institute of Chicago, the Corcoran Art Gallery in Washington, D.C., and other prestigious museums. Several hundred people attended, by his estimate.

“It’s important to keep creating,” he reflects. “I make paintings because I want to make paintings. Retire? Artists don’t retire. It’s not a job. It’s my life.”

It has been his life professionally since 1947, but he had displayed an artistic bent since childhood. Segedin grew up on Chicago’s West Side. Elementary school teachers recognized his budding talent and encouraged him. “I liked to draw,” he says. “The teachers noticed that I put hair and ears on the people I drew. Nobody else in the class did that.”

Segedin’s mother, too, “supported me all the way,” he adds. “She took me to Saturday classes at the Art Institute and to competitions. My dad was supportive as well, but he wanted me to make a living. He’d say, ‘Learn a trade; then do whatever you want.’” 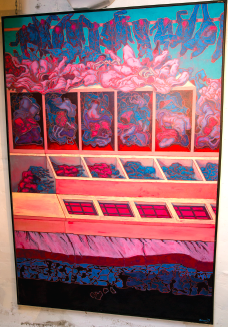 He became an educator. In 1955, he inaugurated the art department at Chicago Teachers College-North, which would become Northeastern Illinois University.

He painted in the summers, an exhausting regimen.

The family had moved to Evanston 20 years before. “My wife and I liked the schools and wanted our kids to live in a diverse neighborhood. We thought Evanston was the best middle ground between Chicago and the far northern suburbs. So far, I was right.”

He has twin sons. One is a production manager with the American Library Association; the other is a wood-worker and furniture maker; several of whose pieces have found a home in his father’s house.

Jan passed away in 2005. The folk art she collected is still displayed on shelves around the house. The couple also shared a passion for theater. They volunteered as ushers, which allowed them to see hundreds of plays a year. They participated in a playgroup whose members met in each other’s homes.

For a reading of I’m Not Rappaport, Segedin recalls, a Central Park set was created for his living room.

The couple also had a 4 p.m. martini ritual, which Segedin continues to this day; just one martini to decompress after a hard day’s work. He jokes that it’s one of the secrets to his longevity.

Art, he says, “was one of the things I was good at. I was really skinny and not athletic. I did it because I wanted to make paintings.

But I never wanted to play the romantic myth of the starving artist. I just wanted to make paintings, and that’s what I did.”

In 1957, a time when few professional galleries exhibited the work of local artists, he became the first president of Exhibit A, said to be Chicago’s first artists’ cooperative. A reunion of seven of the surviving artists was held in 2013 at the Chicago Cultural Arts Center. Segedin resists putting a label on his work. “I never paid attention to what anyone else did,” he reflected. When pressed, he calls it representational or observational.

And what he observed most was Chicago as he knew it in the 1940s and as observed out the windows of the el trains he took into the city. El stations and back alley perspectives of bungalows are dominant subjects in his work.

So are self-portraits (“I’m a cheap model,” he joked in a feature story broadcast in 2013 on the WTTW series, Chicago Tonight) and what he calls “kid’s games;” vintage play activities such as Buck-Buck. He depicts his elder self as a participant in the games; one painting depicts the aged Segedin trying to break through the line in a game of Red Rover.

He is not in denial about aging. He’s lost too many friends for that, he stated matter-of-factly. He had rails installed on his staircases two years ago “before I needed them,” he said.

Some of his most striking pieces, created during the Vietnam War era, are a series of expressionistic works that deal with the Holocaust and dehumanization.

Segedin keeps painting, keeps exhibiting, keeps exploring. It is encouraging, too, that an artist who will turn 89 in March still considers himself a work in progress. “I know I have forgotten much,” he said. “But I am always learning. Part of the satisfaction in painting is the excitement in discovering what happens when you try something. I once did a painting I called ‘Where Will You

Be When You Get Where You’re Going?’ I never know until I finish the painting.”