Evanston-based artist Peter Jablokow has long been inspired by old steam trains and factories, but with this newest work he’s turned his attention to the streets of the town he calls home.

Peter Jablokow found a window of opportunity and took it. The local artist was walking near Bennison’s Bakery and the reflection off its exterior glass struck him as an ideal image for a work he had been commissioned for—to design the cover art of the 2016 Evanston Chamber Community Guide, released in early February.

“There’s all the standard things in Evanston, like the Lighthouse, but I was looking for something different and not specific to any one building,” he says of the image, showing a man working on his laptop inside the bakery as people stroll by on Davis Street, the word “espresso” normally above the window seats changed to “Evanston.” 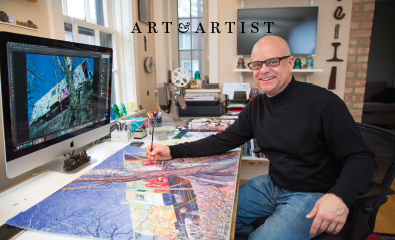 It was done in Jablokow’s signature style of commissioned works, combining watercolor and layers of rendering in Photoshop, though it’s a vastly different landscape for the artist who has made a career of creating large-scale perspective images of rusty bridges, old steam trains and other gritty urban interpretations in solely watercolor. His most popular seller—a snowy day in an old mining town on the Keweenaw Peninsula near Lake Superior—is often seen in his art shows which have included a recent exhibition at Evanston’s Unicorn Cafe and an upcoming show at Central Street’s Danon Gallery, opening April 21.

“I guess it’s grown out of [working] as an architectural illustrator for almost 25 years,” says Jablokow of his artistic vision. 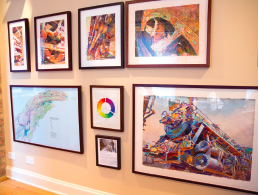 He earned a degree in architecture from Iowa State University and has worked with Chicago firms Rael Slutsky Associates and Manuel Avila Associates in the past. “Because all those technical aspects are ingrained in me, I like all those big old machines and factories where you see much of the infrastructure on the outside and can admire how they have aged. … I don’t like when things look new.”

It’s the reason why, until now, Jablokow hasn’t done many pieces reflecting Evanston itself. “There’s not a lot of broken down places,” he admits, “though I’m starting to find some things that work with my perspective.” He points out the truss bridge near the Central Street Purple Line stop, focusing on its underbelly that is littered with paint cans and debris. Though it might sound treacherous to get deep down into the terrain, it’s all part of the job, he says.

After a colleague warned Jablokow against climbing the Kinzie Street Bridge where the man had cut himself and got an infection from the rust and stale water, Jablokow proceeded to do so anyway. “I was surprised how easy it is,” he offers, conceding it’s the only way he can take the hundreds of photos he needs every time he scouts a new place in order to find an angle that is interesting for him to paint.

“I probably have more than 200,000 pictures on my computer. I never know what I’m going to come up with,” he says.

Part of his morning routine, in fact, is taking photographs of the clouds over the lakefront near the Northwestern campus that could become part of future works. “I want to see how the city looks year-round in different conditions.”

Jablokow has lived in Evanston for 15 years with his wife, a band teacher and clarinetist, in a double-unit condo that also includes his studio. Years before, though, he grew up in La Grange Park, not far from Oak Park where he would find himself often marveling at Frank Lloyd Wright homes, which, for a budding architect, was instrumental in his development.

“It was the farthest I could ride on my bike,” he jokes. “All the houses and buildings by me looked the same but Lloyd Wright’s looked different. They were unique and more dramatic, and I’d ride my bike there and just study them.” When he’d come home, he’d often find his mother painting at the kitchen table. “She painted there every day,” he says, noting that she also worked in watercolors. “She was a big influence on me that I chose that medium. That, and my wife doesn’t like the smell of acrylics. Plus, I’m messy.” 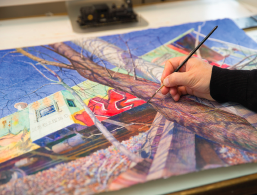 Their home has a few of his mother’s paintings, which are mostly of flowers and nature—they hang proudly in the bedroom and living room. In the hallway there’s also the work of Peggy McNamara, the resident artist of the Field Museum and Jablokow’s early mentor. “She was inspiring and sparked my interest when I was starting to look at all these structures,” he says of McNamara who led classes at North Shore Art League where Jablokow also now teaches. Though he’s not done learning himself: In his spare time, he gets instruction from Evanston’s Allan Gavin.

“I seek out people whose opinion I respect when I’m getting close to finished so I can get feedback,” he says. “That way you can get reactions. You can tell if it catches someone’s attention or not. No matter what they say, you can tell.”

Lucky for us, when it comes to his latest work in the Chamber Guide, there will be a whole year to talk about it.