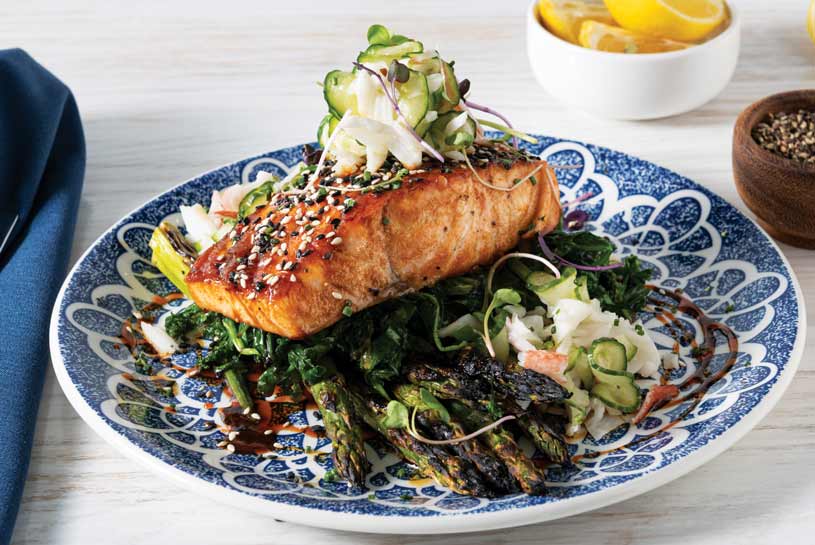 From the jump, there are two things that help explain the downright meteoric success being enjoyed by the Hampton Social Club.

Fact No 1: Virtually every white-washed, beachy-tone, nautical-themed element that’s rocketed the concept to the top of the Instagram charts stems from the bougie-chic imagination of Brad Parker, the CEO and founder of Parker Hospitality.

Fact No. 2: Parker, who grew up in Deerfield, is one of six. The score sheet, back at the Parker home when he was a kid, once read: Brad: 1—Sisters: 5. Challenging at times? Maybe. But young Brad received a free education—from no less than five different sisters—on what women really want when they hit the town out to sip and sup.

Early in his career, Parker didn’t exactly lean into that advice. His inaugural concept, a club-restaurant mash-up called American Junkie, might have made a social media splash when it debuted in 2013, but it didn’t play into his sisters’ sensibilities enough to make them regulars. So Parker—who’s already launched eight Hampton Socials around the country, with plenty more to come next year—did what anyone interested in learning what makes well-heeled female diners tick might have done. He started watching Martha Stewart and a lot of reality TV. And then it hit him—like a giant swinging Birkin bag, clasp-side out, across the forehead—what if he Hampton-ized his original concept? 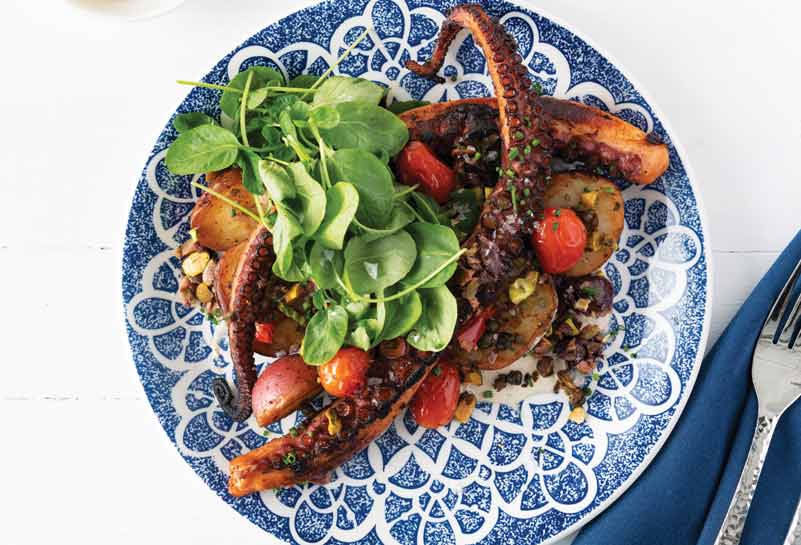 After all, the Chicago dining scene, back in 2015, was teeming with plenty of dimly lit warm-wooded steak havens and faintly Steampunk dining rooms, flush with crushed velvet and lots of exposed ductwork.

Every female starlet, in every reality TV show Parker ever watched, seemed to love, love, love eating al fresco. Not darkness, but light! Charming little tables enveloped in halos of sunshine. Swaying leaves and gentle breezes. And lots and lots of color—bold as a box of primary-school Crayolas—to accessorize the experience.

Lots of surf and a little bit of turf. Hampton Social Club’s menu still feels like it’s been engineered to ensure you can package everything up and tote it away for a coastal picnic. Shellfish on ice. Crab and shrimp bruschetta. Seafood cakes. Ceviche. Tons of salads. Plus lobster rolls, pizza, and the de rigueur smash burger.

And, of course, Parker knew he’d need to come up with some creative cocktails. Really cute little liquid ditties that didn’t burn like diesel on the way down. Frozen rosé. Juicy spritzes. And ball jar cocktails sweetened with lavender and honey. 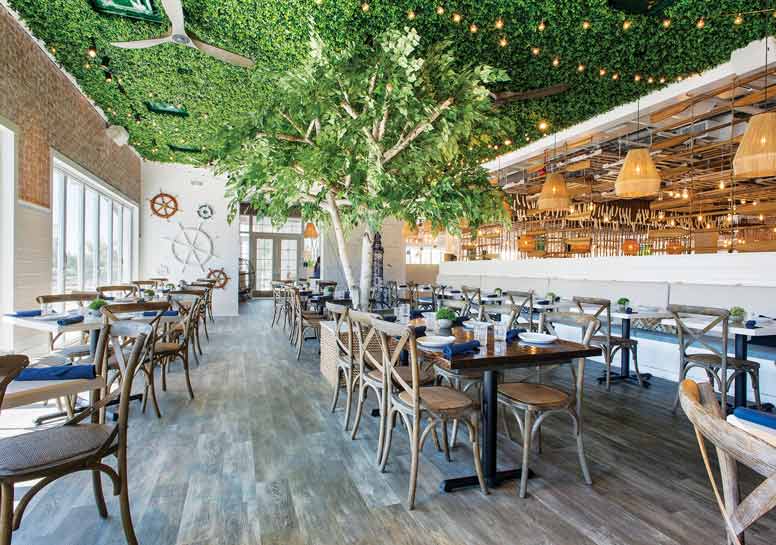 Why not pack up all that fun stuff, Parker figured, and bring it all inside so Midwesterners—men and women and kids alike—could experience a Hamptons retreat closer to their own shore lines.

I’ve eaten in—or peaked inside—just about every Hampton Social in the Chicago, but the sprawling South Barrington location, all 11,000-square-feet of it, may be the most charming of the lot.

They’ve gilded it with all the Hampton hallmarks. The Rosé All Day Lounge, complete with wine coolers, couches, and frilly green faux topiary walls. The milky white walls painted to mimic the façade of a Maine lighthouse. And the strands of tiny lights that glow like fireflies.

There are little nooks and touches to be found here that’ll make you want to go home and re-watch Master and Commander, including a dangling rope as rigging motif, model ships and oars glued and painted onto the walls.

Should you prefer something gentler, go for the salmon poke. Authentic, it’s not. But there’s a more versatile dish, in terms of cocktail pairings, on the menu. Plus, carb-watchers will appreciate the fact that it’s served with both taro chips and thinly sliced watermelon radishes.

The seafood mix, itself, is sweeter than most pokes, due to the addition of diced mango. It’s very light, and mildly sweet— the sort of thing you’d order if you’d book the day at a high-end spa. Lots of cucumber, cold radishes, and slippery slivers of crab glazed with chili—like a sweet East Coast chow-chow.

For dinner, we hewed toward the old reliables. The balsamic glazed skirt steak won’t weigh you down, but be forewarned: its accompanying creamed street corn goes heavy on the spice. The honey-glazed salmon, accompanied with a fried seaweed salad plus a bed of asparagus, isn’t exactly novel, but what it lacks in originality, it more than makes up for in terms of succulence. 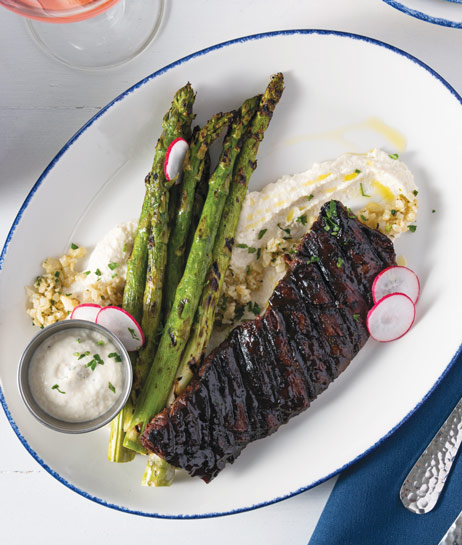 What’s particularly wonderful about a dining room like this is that you can linger as long as you want. We saw a few folks slip out of their chairs and enjoy a nightcap at the bar, and another group carry freshly poured white wine over to the Rosé Lounge for pictures. Proof that it’s not just a room with some lush views—it’s a concept with some serious staying power.

Make no mistake about it, Hampton Social makes some smart-looking drinks, spearing blueberries onto toothpicks instead of olives, clipping translucent plastic leaves onto the sides of glasses and using wooden honey dippers to give off a quaint summertime vibe. 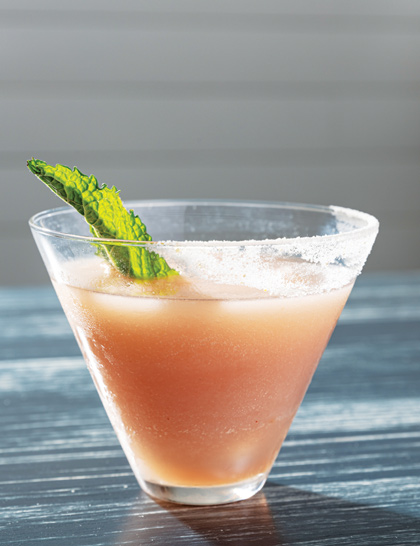 This clever play on a hard iced tea—there’s tea-infused bourbon in there—comes with sprigs of greens sprouting up from the glass and a sand-colored straw bearing a tiny plastic bee. The taste’s buzz-worthy too, thanks to the rounded semisweet afterglow of a touch of Giffard apricot-flavored liqueur.