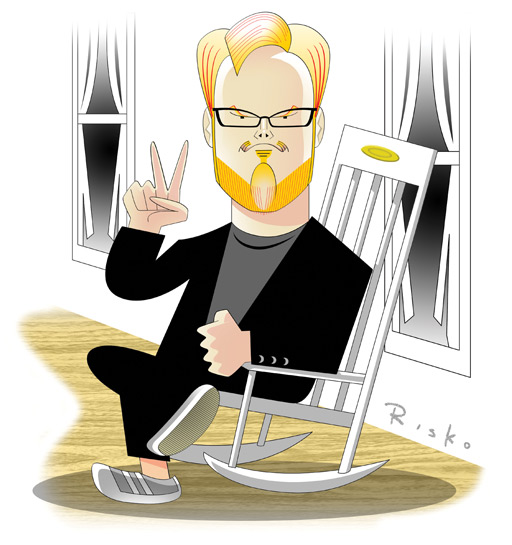 Did you hear? Jim Gaffigan—THE Jim Gaffigan—plans to grace Barrington again with his hilariousness in late September. Country heard the chatter early last month. Maybe, we thought, Gaffigan wanted to return to good ol’ Barrington to perform before a private audience and raise gobs of money for another heartwarming cause.

You see, Gaffigan has the philanthropy gene. In 2012 he dropped his comedy album “Mr. Universe”—for which he received a Grammy nomination—offered it for $5 on his website and donated $1 for every sale to the Bob Woodruff Foundation. The BWF is a nonprofit that supports post 9/11 service members, veterans, and their families after they return home.

Woodruff, an American television journalist, was seriously injured by an IED explosion during an ABC News reporting trip to Iraq in 2006.

In true Hollywood style, our people got in touch with Gaffigan’s people to confirm his returning to Barrington and asked if Gaffigan would share with us some memories of his childhood here.

We received this response a few days later:

“All of my earliest memories were of growing up in Barrington until the fifth grade,” Gaffigan states. “It’s literally the reference point of my entire life. No pressure.”

Gaffigan, now 56-years old and a father of five, grew up in Barrington’s Jewel Park neighborhood until he was 10 or so, in an old farmhouse, built circa 1867. Before Gaffigan’s parents bought their family home in Jewel Park, the Jewel Tea Company owned it, using it as an inn for its sales reps.

Gaffigan must have made an appearance in Barrington, somewhere. We’re guessing—no, assuming—he brought the house (not a certain Jewel Park dwelling) down and shook more than a few other structures in the 60010.

Gaffigan’s brand of comedy has been described as clean, observational. He published the book Food: A Love Story in 2014. It’ll make you hungry. It’ll make you laugh. Hard.

“What are my qualifications to write this book?” writes Gaffigan, who was born in Elgin and is the youngest of his parents’ six children. “None really. Here’s why: I’m a little fat. If a thin guy were to write about a love of food and eating, I’d highly recommend that you do not read his book.”

If you didn’t catch Gaffigan’s event in Barrington this past month, you can book a ticket to the six-time Grammy nominated comedian’s current show, The Fun Tour, at a location around the world. Or tune in to his humor from the comfort of your couch and watch his current special Comedy Monster on Netflix. And you never know, if Barrington is—as he says—the “reference point for (his) entire life” there may just be a tour based on our hometown in the works.

For more information on Gaffigan’s The Fun Tour, visit jimgaffigan.com.