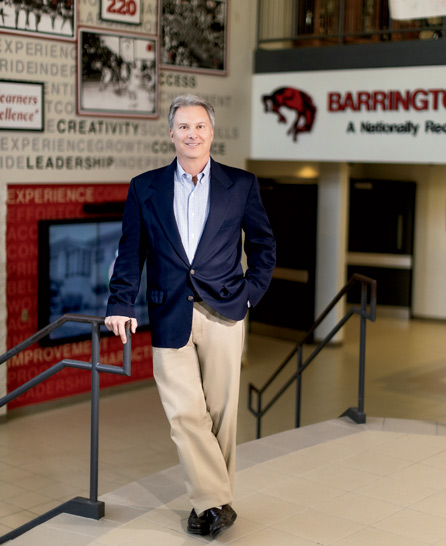 Dozens of screaming fans spilled out of the stands and sprinted across the court to celebrate with their hoops heroes. Others danced, pumping their raised arms and jumped joyously.

But this was more than a staffer attempting to squeeze a lung out of an administrator. Sowa had suited up for Broncos hoops teams in the early 2000s and played under the direction of … Obsuszt, who coached the program from 1995 until 2002 before succeeding Bob Carpenter as the school’s athletic director in 2003.

“Mike Obsuszt loved coaching basketball and loved talking basketball off the court,” says Sowa (BHS Class of 2003), a forward on Obsuszt’s 2001-2002 Sweet Sixteen club (24-7) in Class AA. “He’d reminisce about a game from 1997 and tell you all about it, with details about what this player did in the fourth quarter or what another player did in a pivotal moment. After I became an assistant coach, I’d sit in his office before practices and he’d tell me the great things other Barrington teams were doing or he’d describe what a Barrington athlete had just accomplished.”

“He still is,” Sowa adds, “the ultimate storyteller.”

Obsuszt’s 27-year—and highly successful—chapter at BHS ends in late June. BHS teams had collected 23 state trophies and won three state titles before Obsuszt took the AD reins in 2003. The totals during the Obsuszt Era: 49 state trophies and six state championships. That Final Four boys basketball team this past winter wound up taking third place in Champaign this past winter, one weekend after the BHS girls basketball team finished in a program- best second place at the 4A State Tournament in Normal.

“He’s the best,” says New Trier High School Athletic Director Augie Fontanetta, a former Fremd High School athletic director. “Personable, professional, selfless, well-respected—Mike is all of that. But the word that comes to mind first when I think of him is ‘genuine.’ I’ve seen him around coaches and parents and athletes, as well as his staff, and it’s always clear to me that he genuinely cares about people, his job, Barrington’s teams, and the teams competing against Barrington.”

“Mike,” he adds, “always brings energy, the good kind, to situations. I’ve never heard him complain … about anything. He’s a leader. He was a mentor to me in my early years as an athletic director.”

“I’ll miss the people, the interactions with our coaches—the best coaches in the state—my administrative staff, the athletes, and the former athletes who return to the school and tell you how grateful they still are for the experiences they had as student-athletes,” says Obsuszt, who, before starting at BHS in 1995, served as a men’s basketball assistant coach at North Park College for a season after completing a 10-year tenure at Walther Lutheran High School (WLHS)(as a teacher, as a coach, and, for five years, as athletic director) in Melrose Park.

“Our goal at Barrington, every year, is to win games,” adds the husband of Michelle and the father of four (Ashley O’Brien and sons Ryan, 25, Kyle, 23, and Tyler, 17). “But our mission is to help kids become better people, better students, better athletes—in that order.”

Obsuszt attended Lutheran High School West in Rocky River, Ohio, where he played football and basketball and ran track. The savvy, 5-foot-10 point guard earned starting nods in his junior and senior seasons, leading a 16-team conference in steals and ranking third in assists before receiving Team MVP honors as a senior.

But his basketball career took a detour in the first of his two seasons at Concordia University Texas in Austin. Every hoopster but Obsuszt stood 6-feet or taller.

“I realized I was going to be that guy who heard cheers only after entering as a reserve player late in games,” Obsuszt, a Lake Zurich resident, recalls.

The Concordia coaching staff offered Obsuszt the rare opportunity to be a player/coach for the program’s JV squad. He took it. After his sophomore year he transferred to Concordia University Chicago in River Forest, student-taught at WLHS for a year, and earned his teacher certification.

For several years, as a full-timer at WLHS, Obsuszt taught social studies, coached basketball and football, and oversaw the athletic department. On Thursdays before Saturday afternoon home football games, he and other football coaches turned into maintenance workers, striping the field’s yard lines with white paint.

“We had to do it,” Obsuszt says. “You know what, though? It was a good thing, because we bonded as we got the field ready.”

Obsuszt left his mark at BHS, too. His fingerprints are all over Barrington Community Stadium, which debuted in 2008 with the installation of field turf and a host of other enhancements that transformed an adequate 1970s high school venue into a gleaming, multi-purpose stadium. Obsuszt worked with architects from start to finish and asked for wish lists from coaches, ticket sales and concessions workers, and marching band personnel.

“I enjoyed every aspect of the project,” Obsuszt says. “The stadium is a source of community pride.”

Obsuszt formed the school’s Athletics Leadership Council about five years ago. Guest speakers have led discussions about what it takes to have a positive impact as a teammate and the importance of demonstrating proper body language during competitions, among other topics.

“Mike,” Fontanetta says, “makes educated decisions. That’s what effective leaders do. I respect his voice, his opinions, each time he speaks. A lot of people do. He loves being a high school athletic director. Loves his coaches and administrative team, too.

“But what I’ve always admired the most about Mike Obsuszt is that he does what he thinks is best for his school’s athletes.”