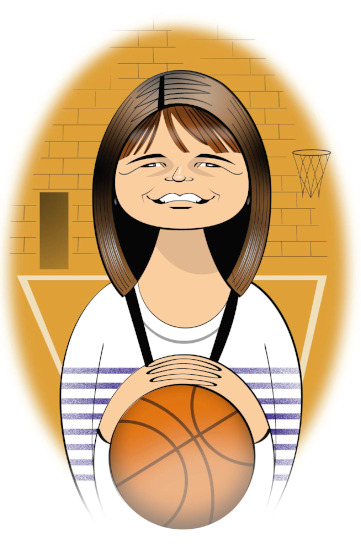 Barrington High School girls’ basketball coach Babbi Barreiro raised eyebrows and elicited more than a few perplexed looks when she presented team t-shirts to her Fillies for the 2021-2022 season. The motto “Be For Each Other” didn’t adorn the front of the shirt. Nor did it stretch across the back as a nameplate does. Barreiro chose instead to position the four-word catchphrase, tilted just so, across the material covering the back of the left shoulder.

“My players wondered what I was thinking as they held up the shirts for the first time,” recalls the 55-year-old Barreiro, an Illinois Basketball Coaches Association Hall of a Fame inductee. “But that area on the back, that’s the spot you usually touch to pat a teammate for doing a good job or to encourage a teammate after a tough moment.

“I wanted our shirts to be different, to stand out.”

Barreiro’s 2021-2022 team—her 30th at BHS—in one word: outstanding. The Fillies went 30-6, which included a 19-game winning streak from January 11 to March 4 and reached the Class 4A State Tournament championship game before losing 55- 43 to Stevenson High School at Illinois State University’s Redbird Arena on March 5.

Six of her hoopsters, including superb junior guard and Purdue University recruit Sophie Swanson, played major minutes during this wondrous winter season, but the rest of the squad—the unsung octet—also proved vital.

“Those eight, including one injured player,” Barreiro says, “took their role of helping our starters prepare for each game seriously. The entire team, such a special group, embraced the team concept.”

The team set seven goals before the season’s start and adhered to each one. Three of the on-court aims: pursue excellence; choose to be humble and hungry; and never take a play off. In team meetings, coaches read aloud chapters from the book WOLFPACK: How to Come Together, Unleash Our Power, and Change the Game, by two-time U.S. Olympic gold medalist and women’s soccer player Abby Wambach.

“We spoke with all four, right before the start of our playoffs, and asked, ‘What’s it going to take for us to advance as far as we want to advance?’ ” recounts Barreiro, a Barrington resident since 1998, a winner of 489 career games, and the mother of daughter Jaydyn, 8, and son Greyson, 6. “All of them told me—told us—how important it is to keep our eyes on our goals. Gracie coined it, ‘Eyes on the Prize’— EOTP!”

Just before the beginning of March’s state championship game, Barrington Assistant Coach Joe Molloy sat next to Barreiro and encouraged her to look around, to soak up the atmosphere.

“Guess what,” Molloy told Barreiro. “We’re going to play for the state championship.” A poignant moment in a remarkable season that personified EOTP.