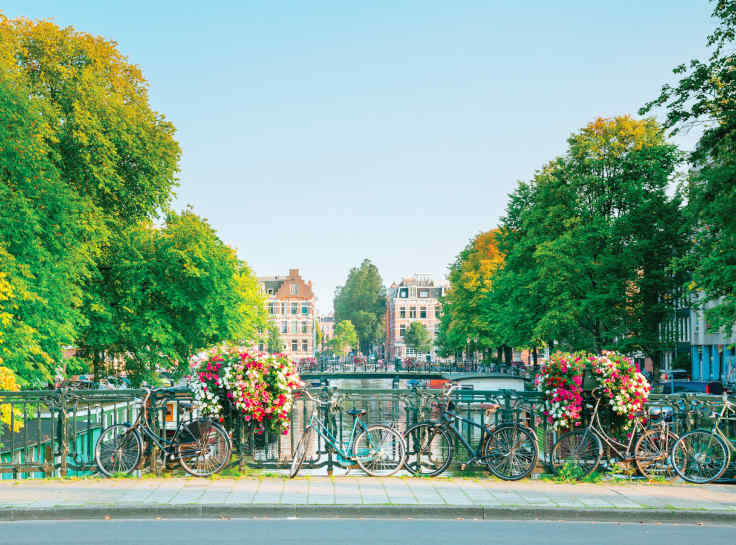 In the 17th century, The Dutch Golden Age, Amsterdam emerged as one of the world’s most important centers of trade. With that came wealth and with wealth, a blossoming of culture and the city’s expansion. The Dutch masters thrived, producing some of the world’s most treasured masterpieces, while storybook row houses sprung up like Dutch tulips along winding canals.

The city continues to be steeped in culture and retains the beautiful architecture of centuries past, but it also feels modern. Just beyond the historic facades, we found swanky hot spots and modern luxury. Our first encounter with a thoroughly modern Amsterdam took place while traveling from the airport to the city center. During this quick 25-minute ride, we spied massive glass structures lining the highway. Those occupying these glass houses? Many of today’s tech giants, including Google. I wasn’t expecting a modern landscape as an introduction to the historic capital, but it helped explain Amsterdam’s thoroughly hip vibe.

This vibrant city is easily walkable (or bikeable). It possesses 165 idyllic canals flanked by fairy-tale gabled houses—some with a hint of tilt disclosing the dwelling’s marshy underpinnings. We spent many an afternoon strolling the cobblestone streets, crossing bridge after bridge in this charming city. Our favorite neighborhoods were De 9 Straatjes (Nine Streets) and Jordaan, both full of leafy canals, art galleries, boutiques, and cafés. You could spend years exploring these neighborhoods and not exhaust the possibilities of their quaint storefronts. 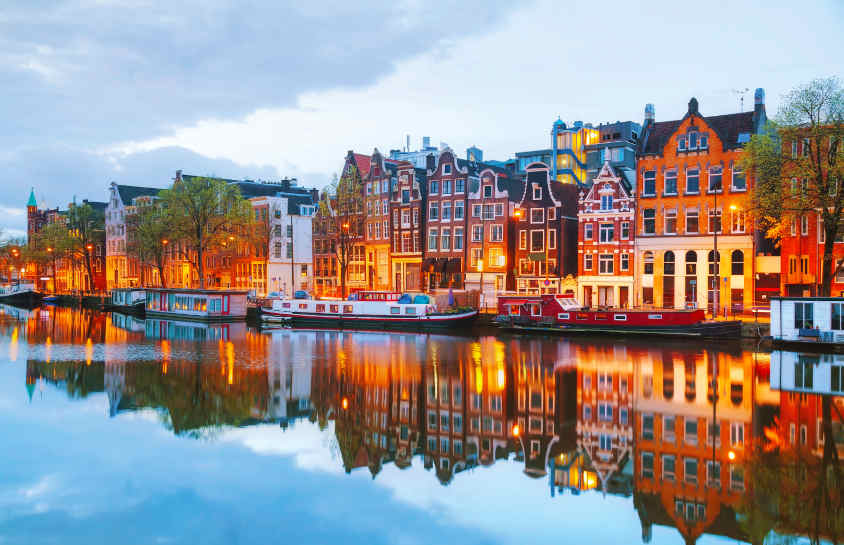 Everything is very close, the only area requiring a bit of a walk from our hotel was Museum Square and Vondelpark, one of the city’s largest green spaces. The museums were worth the extra steps and the scenery en route can’t be beat (you’ll pass an Instagram- worthy, canal-side flower market on the way).

I promised my daughter this trip would be more of an “enjoy the city” adventure with fewer visits to churches and museums. However, I could not pass up Rijksmuseum, an architectural treasure housing many of the Dutch masters’ work. We saw several Vermeer and Frans Hals masterpieces, but the museum’s most celebrated work is Rembrandt’s The Night Watch. The painting is breathtaking in scope and size.

We popped in next door to The Van Gogh Museum established by Van Gogh’s nephew. This light-filled building showcases the short and tortured life of Vincent Van Gogh. The incredible breadth of Van Gogh’s work paints a portrait of the man himself, and you will glimpse the artist through the eyes of his family.

Be sure not to miss The Rembrandt House Museum, home to many of his etchings, and The Anne Frank House. The latter is very popular amongst tourists, so reserve your tickets in advance. If you are going to visit several museums and attractions on your trip to Amsterdam, you may consider buying the I amsterdam City Card. It includes admission to a whole list of museums, sights, and a canal boat tour. This tour of Amsterdam’s UNESCO-protected canal ring is a delightful way to experience the city.

As a home base, we chose the Anantara Grand Hotel Krasnapolsky located in the heart of the city and marrying historic significance with modern luxury. In 1865, Mr. Krasnapolsky, a charismatic Polish tailor, opened a tiny coffee house on the site that is now this grand hotel. Our spacious and modernly appointed Royal Suite offered glorious views of the National Monument, Dam Square, and the Royal Palace.

As a nod to Mr. Krasnapolsky’s chosen trade, “The Tailor,” a beautiful indoor/outdoor cocktail bar located off the reception hall, offers tailor-made and bespoke cocktails. A perfect locale to relax after a day of sightseeing.

We began our days feasting in The Wintergarden, a 19th-century glass-ceilinged courtyard, once the backdrop of a royal wedding. Just across the hall, lies The White Room. Here under the watchful eye of three-starred Michelin chef Jacob Jan Boerma, the restaurant showcases refined modern cuisine using only Netherland’s freshest ingredients in a historic setting. As we dined on the most splendid food in Amsterdam, I envisioned gallant guests of long ago.

With all the walking, desserts are well deserved—the hotel boasts a resident chocolatier who creates decadent delicacies. Upon arrival, a chocolate Christmas stable was waiting for us in our suite—a signature Anantara touch. We found it almost too beautiful to eat, but the scent wore down our resolve.

If you have time for a day trip, The Hague is only an hour away via train and the trip offers breathtaking views of the Dutch countryside. Be sure to visit Andrew Carnegie’s Peace Palace, the seat of the United Nations International Court of Justice, and the Mauritshuis museum, home to Vermeer’s Girl with a Pearl Earring.

We found The Netherlands utterly charming and look forward to a return. Recently, Amsterdam has sought to reshape its anything- goes reputation. The campaign has been a success; during our trip, we saw none of the raucous behavior sometimes associated with the Dutch capital’s red-light district and cannabis coffee shops. We loved every minute.

Leaving Amsterdam we set our sights on another golden city, Budapest. 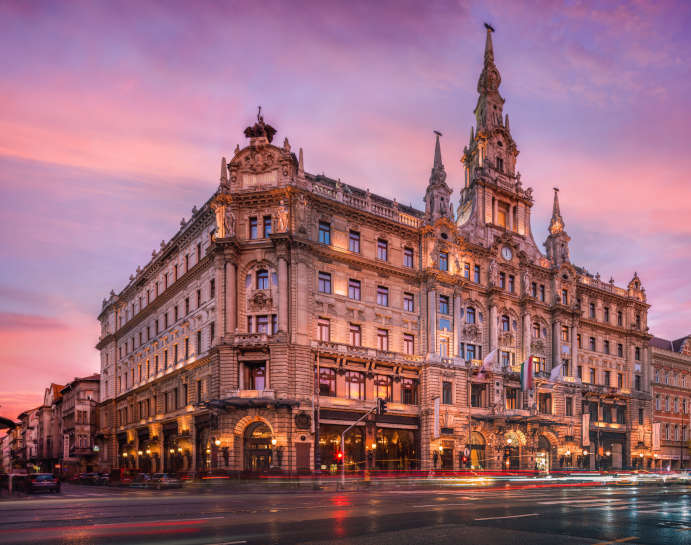 Once Buda and Pest were separate cities on either side of the Danube. In 1873, Buda, Pest, and a third town, Obuda, were united to become Hungary’s capital city. The Buda side extends into the hills on the west bank of the Danube, crowned by Castle Hill. On the east, the former Pest lies in the lowlands and is home to the immense Parliament building.

1896 is the year to remember as most of the city’s buildings were erected for the city’s 1,000th-anniversary celebration. During Hungary’s millennial celebrations, the spirit of entrepreneurship, art, and literature was at its zenith. Throughout the city, you’ll find a treasure trove of architectural styles from that time including Baroque, Neoclassical, and Art Nouveau.

We stayed on the Pest side in the beautifully renovated 5-star Neo-Baroque-style Anantara New York Palace, home to the famed New York Café and located just a quick 20-minute drive from the airport. The café boasts Belle Époque décor that has dazzled visitors for more than 120 years. Its frescoed ceilings, Venetian chandeliers, and gilded balustrades reflect the grand atmosphere of the Habsburg coffee houses. No wonder this landmark was a favorite of artists, writers, and aristocrats.

Parliment on the banks
of the Danube

The hotel is an ode to Europe’s Belle Époque period—a grand marble façade adorned with ornate carvings features an impressive clock tower, while inside the lofty central courtyard/lobby is surrounded by open terraced floors reaching toward a vaulted glass ceiling – transporting you to the golden era in which it was built. Off the central lobby is the 100-year-old Poet Bar, overlooking the White Salon Restaurant. With its red-hued, intimate ambiance, it was the perfect place to unwind with a cocktail after a day of sightseeing.

The 185 rooms and suites are accented by centuries- old art and antiques, Murano glass chandeliers, and sumptuous marble bathrooms. Our suite with its spectacular city views overlooked the bustling and elegant Erzsebet Korut, one of Budapest’s most important boulevards and one that would carry us to many sights. 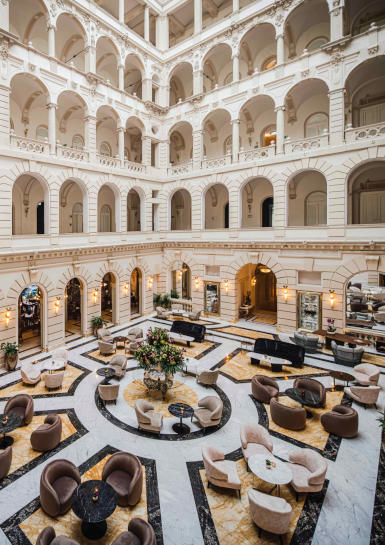 Budapest is an easily navigable city with plenty to see. A few musts are the Neogothic Parliament, an immense structure situated on the banks of the Danube. The world’s third-largest Parliament building is spectacular inside and out. It contains close to 700 interior rooms, ten courtyards, almost 100 statues of Hungarian rulers on its façade, and 12.5 miles of staircases. Be sure to book a tour to learn its history and to view King Steven’s crown jewels.

During our visit, Budapest’s landmark Chain Bridge, the first permanent stone bridge connecting Buda and Pest, was under renovation so instead, we crossed the Margaret Bridge with its beautiful views of the Parliament and Castle Hill. En route to the Royal Palace, we stopped at Fisherman’s Bastion. This decorative fortification offers splendid panoramic views of Budapest. Its seven turreted towers symbolize the seven Hungarian chieftains who founded Hungary in 895.

Leaving the site, you will come upon the 800-year-old Gothic-style Matthias Church, the site of the coronation of two kings. A short walk away lies the Royal Palace; its grounds are home to beautiful fountains, gardens, and views of the city. Be sure to take the funicular back down the hill—this fan-favorite was originally built in 1870 as a way to ferry workers to and from the palace.

On our walk back to the hotel, we stopped at the large indoor market – yet another building built for the 1896 celebration. This vast space houses stall upon stall offering meats, cheeses, and of course, Hungarian Paprika, which you will find in all forms, sizes, and intensities.

Famished from our day of touring, we booked an Anantara Spice Spoons experience. Overlooking the beautifully illuminated Parliament building, we feasted on traditional Hungarian fare at the Chef ’s Table. We sampled variations of hearty Hungarian breads slathered with a variety of spreads. Next, was a plethora of sausages and potato moodily. Then, we donned aprons and joined Chef Andras Wolf behind the grill to prepare langos, a traditional Hungarian street food. After mixing and kneading the pizza-crust-like dough, we fried this delicious treat and topped it with sour cream, grated cheese, and paprika. During the meal, we tasted various palinka, a traditional Hungarian fruit brandy, and ended on a sweet note sampling desserts made with traditional cottage cheese (a Hungarian favorite).

On our last day, we headed in the opposite direction of Buda toward the 1896 fairgrounds. At the park’s threshold, is Hero Square, a large plaza bookended by the National Museum and the Palace of Exhibitions. Beyond the square, you will find a large city park, a zoo with fun Art Nouveau décor, and a “Transylvania castle” boasting a hodge-podge of architectural designs. Finally, we visited the famed Neo-Baroque Széchenyi Baths, Europe’s largest medicinal bath sourced by two thermal springs.

For the perfect ending to our European escapade, we visited The New York Palace spa – beneath the hotel’s lobby lies an expansive spa housing steam rooms, saunas, a surreal swimming pool, and relaxation rooms. As we enjoyed a warm mud massage inspired by Budapest’s thermal bath heritage, memories of sights seen danced in our heads. This proved the perfect finishing touch to a fantastic visit. Pack your bags, European capital-style history and culture await.