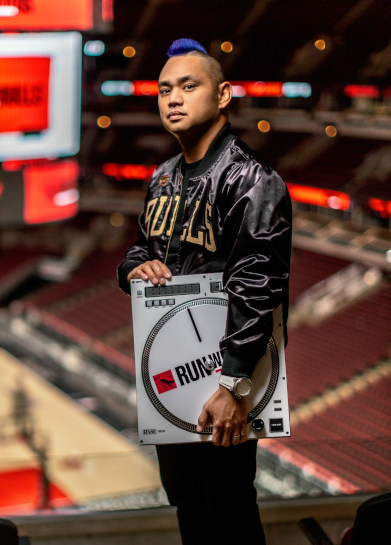 If you were a kid who liked to listen to the radio in the 80s, Chicago was the town to do it in.

“When I was in high school, all I wanted to do was grow up and be a DJ [disc jockey] on Chicago’s B96. The DJs that worked on that station were legends and I made a promise to myself, that one day I would be one, too.”

Garcia’s parents were on board to help his dream come true, as long as he promised to get an education first.

“My mom and dad were great,” he recalls. “They bought me all my gear, and in return, I made National Honor Society and stuck with soccer and gymnastics.”

From an early age, Garcia seemed to have what it took to be a tastemaker in music—someone who knew a hit before anyone else did. His Chicago roots gave him an appreciation and passion for house music, which helped set the stage for his deep knowledge of dance music from all parts of the world. It came as a surprise to no one when Garcia was hired for his dream job as a DJ for B96 under the name “DJ Flipside.” 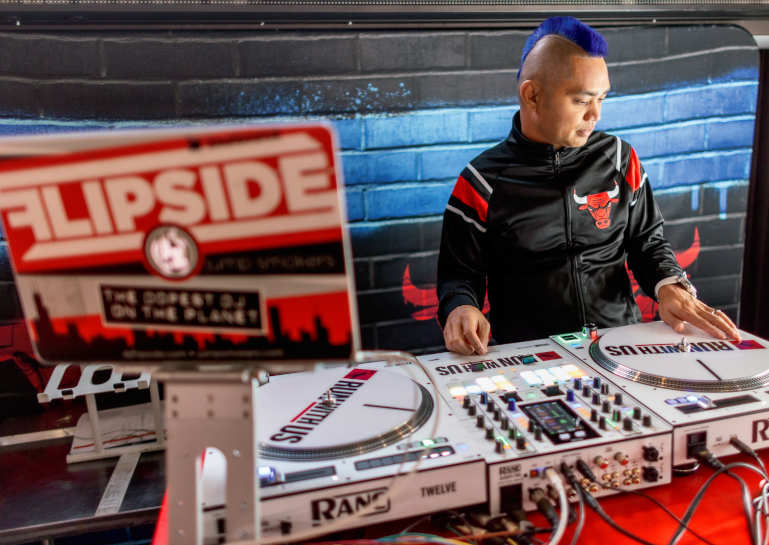 Spinning before a Bulls’ game

“People ask me how I came up with my radio name and it was really three things,” he says. “‘Flip’ is a nod to my Philippine heritage and to all the gymnastics my parents had me doing when I was a kid. It’s also what we call the ‘b’ side—or the unpopular side—of a record.”

When Garcia was in college, he met DJ Speed who was the first hip-hop radio personality on B96. It was he who introduced Garcia to a number of people in the radio business who ultimately helped get him in the door at B96.

Garcia is best known for his highly rated “Flipside at Five” mix show on B96, as well as 104.3 Jams—a throwback station—in Chicago. He has also expanded his reach to Fire Lane in Los Angeles, 98.7 Amp Detroit, Hot 95-7 Houston, along with guest spots on Power 106 in Los Angeles and 92.3 Amp in New York City.

While working at B96, Garcia formed the Jump Smokers, an electro house music group. As the producer of Jump Smokers, Garcia created official remixes with many of the top names in the music industry including Beyonce, Selena Gomez, Demi Lovato, Katy Perry, Pitbull, Pink, Rihanna, Usher—more than 200 in total. Some of his latest remix work includes Mariah Carey, Anne Marie, AJR, and Foster The People.

“Before the pandemic, we were traveling all over the world, Las Vegas to Manila, Miami to Singapore, Atlantic City to Indonesia,” Garcia says, recalling pranks a certain Enrique Iglesias liked to play while on the road. “It was an exciting time, but with COVID-19, we had to change gears. I learned about Twitch, which is this streaming service for music, and I was able to keep producing music. People from all over the world were able to find me, and our music was still being played. By staying connected to the industry in this way, I was still able to make a living and earn money when so many things were shut down.”

Although the coronavirus wreaked havoc on event venues, Garcia had long since established himself as the official DJ for the Chicago Bulls, the U.S. National Soccer Team, and the Northwestern University Basketball Team. As restrictions have started to lift, Garcia’s professional life is beginning to return to pre-pandemic levels.

This fall, Garcia became the official DJ for the Chicago House Athletic Club (AC), an American professional men’s soccer club based in Bridgeview.

“It’s been such a great thing,” says Garcia about his position with the Chicago House AC. “The team has really embodied the culture of house music, which is such an important part of Chicago. It’s awesome helping this new team build its brand through music.”

Garcia has enjoyed reconnecting with the soccer world, a sport that meant a lot to him as he was growing up—both his father and brother are coaches in the soccer world. In November, Garcia was part of the fanfare surrounding the U.S. Men’s National Soccer team’s effort to qualify for the World Cup.

“The U.S. team had a match up with Mexico and there was a lot of smack being talked between the two teams leading up to the game,” he shares. “The Mexican goal keeper suggested in an interview that the United States looked in the mirror and hoped to see Mexico, suggesting that the Americans wanted to mold themselves as a team in their rivals’ image. A U.S. Player named Christian Pulisic wrote ‘man in the mirror’ on his undershirt that he wore hidden under his jersey at the game. After Pulisic scored, he revealed his shirt to the crowd and they went crazy! When the U.S. team ultimately won, my boss made the call for me to play Michael Jackson’s “Man in the Mirror” to kind of rub it in. It was such a great moment and it showed the power of music. It was incredible to see the media pick up on this and just run with it.”

The Chicago Bulls organization is also tapping into Garcia’s deep skill set to create more dynamic half-time shows. “We—myself and Marquee—have created some original music specifically for the Bulls’ half-time show for the Pride Game. We’ve also produced a song featuring King Marie called ‘Ready’ that plays every single game. I’m so proud of this piece and how the Bulls as an organization is making music a central part of its programming,” Garcia adds.

Networking has been one of the critical factors in Garcia’s success—something he never forgets.

“I will always be grateful to those who paved the way for me,” he says. “Even though I was young when I started my career, I was always surrounded by good people who wanted to help me succeed. As I continue to move ahead, I want to make sure that I give back and help young musicians meet people and learn the skills they need to make it in this business. Giving back will always be part of what I do—what I create.”

Goal-driven Garcia hasn’t stopped dreaming big since he achieved his goal of being a fixture on one of Chicago’s most popular radio stations.

“I always have to have a goal,” he says. “I love producing music—both working with other artists and some of my own. Being nominated for a Grammy would be an awesome next goal, and then winning a Grammy—now that would be something.”