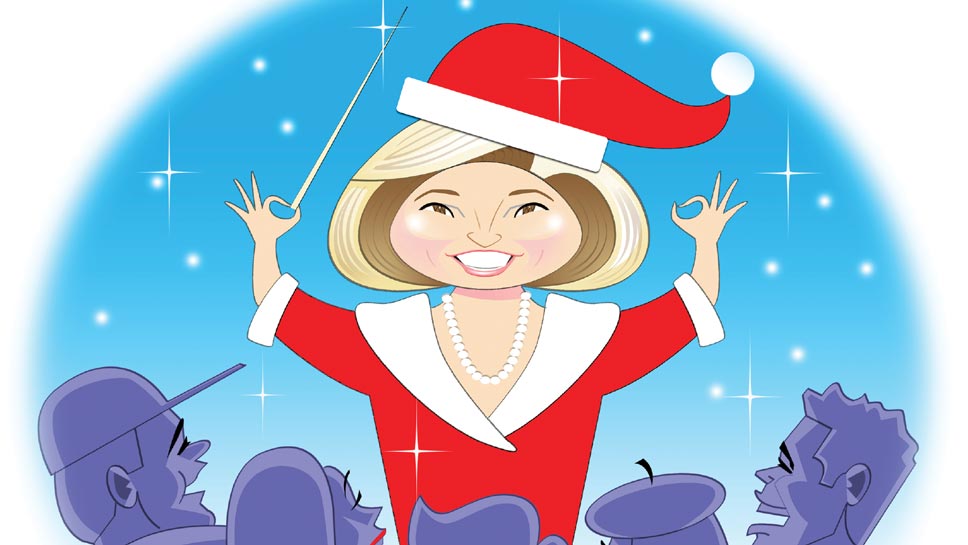 Around town, it’s beginning to not only look, but sound, a lot like Christmas.

The critically acclaimed Nancie Kozel Tobison, longtime former Barrington High School Choral director, will be leading a Christmas Carol Sing-A-Long at Barrington’s White House, on Sunday, December 19, from 3-4:40. Yes, the wonderful family tradition that was started back in 2019 is now back. What a joyful opportunity to sing along with your favorite traditional carols while also enjoying performances from Barrington High School choral alumni.

The program will feature at least ten former students who now have careers in music. These professionals are based in Los Angeles, New York, and Iowa and have arranged their schedules so that they are available to perform in this year’s program. Tobison says the afternoon will feature madrigal groups, solos and duets, and the beloved sing-a-long. In addition, Kathleen Wilson will be playing flute and her daughter Katelyn Wilson, a professional opera singer, will be performing.

While she is nothing if not humble, some of Tobison’s many accolades must be mentioned. She was honored at Carnegie Hall in 2014 as the Choirs of America Music Educator of the Year. Additionally, her impressive background also includes 14 Christmas performances at that other White House, in Washington D.C., under three different Presidents. She also performed at the Sidney Opera House, Forbidden City, and the Cultural Overture to both the Beijing and London Olympics.

In addition to being the Barrington High School Choral Director for several decades, Tobison was also the director of three church choirs. “The Christmas season defined my whole year,” Tobison says. “I just love this time of year. Christmas music makes people feel good, hopeful. People come to feel uplifted, reminisce, and be enveloped in the sounds of the season.”

“It is wonderful to revisit music that puts a smile on peoples’ faces. I think everyone is looking forward to getting together after having been locked down and not having had a celebration in so long.”

Although Tobison moved to Arizona to retire, she says that she “failed retirement. I hated being retired.” Thus, she is even more grateful to return to Barrington to lead this special performance. Tobison says that she will always consider Barrington her home. “I lived there for thirty years and raised my four children there. There are wonderful people in Barrington, people who appreciate the arts. Barrington has a lot of history and many annual events. Arizona is my western retreat.”

No one will want to miss this fun afternoon, enjoying the sounds of the season and surrounded by beautiful Yuletide décor. It is guaranteed to put everyone in the holiday spirit! Cookies, eggnog, and hot chocolate will be served.

For more information, and to purchase tickets, visit barringtonswhitehouse.com/events.