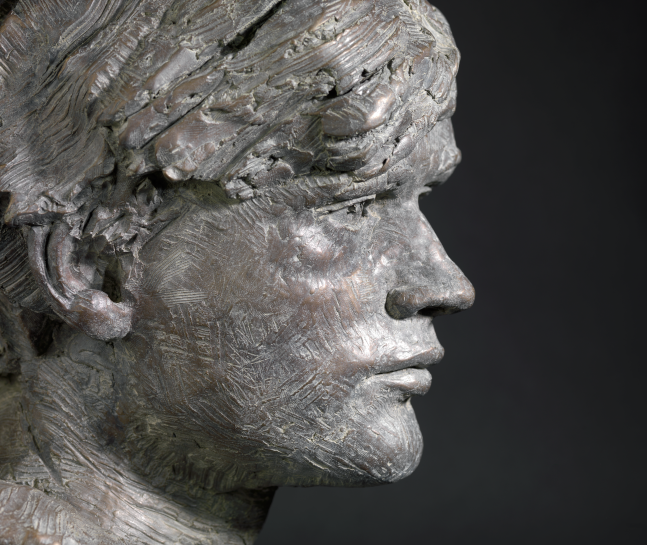 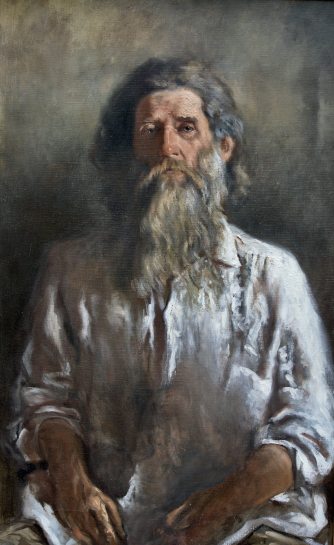 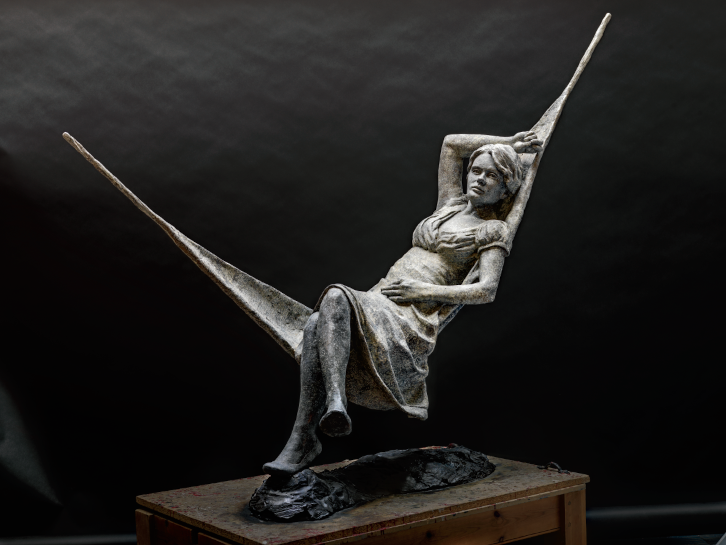 Bella in a Hammock – Bronze

What you notice first about the painting are the subject’s eyes. Clear blue and direct, they seem to study you as you study them. And then, there’s the graying beard, so long it flows past the collar of the white shirt, which (you notice) drapes over some rather gaunt shoulders. Breathtakingly beautiful, the oil painting, done in the style of the old masters, was painted by artist and former Palatine resident Scott Pohlschmidt when he was only 21 years old.

The painting comes with a fascinating story.

As an exchange student from DePaul University where he’d won a dean’s art scholarship, Pohlschmidt was studying with Charles H. Cecil (a New Trier High School graduate) who had a painting and sculpture atelier in Florence. Pohlschmidt took to the atelier so well, he stayed on to study longer, and to teach. One day eating in a tiny rustic restaurant near the atelier a fellow student noticed a striking looking man—a homeless gentleman from Germany named Hans, and pointed him out to Scott.

“His look was so distinctive, he was hired by many of the forma art schools in Florence to model for paintings,” Pohlschmidt explains. “The man’s earnings from modeling were more than enough to take him off the streets, but Hans chose to live that way. When I asked him to model for two terms of painting, he was more than happy to comply. So I put him in my white shirt, and we set to work on that painting.”

But the story of Pohlschmidt’s painting doesn’t end there. It so happened that some Charles Cecil studios were located above the British Institute. When the institute decided to name its library for Prince Charles, his Royal Highness came to Florence for the ribbon cutting. Venturing up into the studios while there, the prince greeted Cecil, and walked over to admire Pohlschmidt’s portrait of Hans. “Did you paint this?” the prince asked Cecil. “No,” he replied. “That painting was made by one of my students, Scott Pohlschmidt.”

Twenty-six years later, the painting hangs in London. It’s one of the dozens of art works Pohlschmidt went on to produce first in Florence, and then in England where Scott and his wife, artist Ann Witheridge, cofounded their London Fine Art Studios.

In addition to the fact that both have identical twins, Scott and Ann have an important commonality: Their reverence for traditional fine art. Together, they have dedicated their lives to giving aspiring artists formal training in representational drawing, oil painting, and sculpture at their school.

Situated on Lavender Hill, the school’s 10 studios and art store are housed in an 18th century building, the Battersea Business Centre. It’s just steps away from the house where Scott and Ann live with their two daughters, Florence and Liberty.

The couple and their supporting teaching staff of eight artists— plus school Director Clare Witheridge, Ann’s twin—welcome students of all levels. “We provide a supportive learning environment in which to acquire new skills and a deeper understanding of the figurative tradition,” says Pohlschmidt.

Students at the school range from aspiring career artists who attend classes full-time Monday through Saturday, to amateurs and enthusiasts who may participate in foundation classes on the
fundamentals of drawing and painting. There are short courses in figure, portrait, still-life, landscape, and cast drawing. There are classes in etching and sculpture, and workshops with visiting international artists. All of that, plus art history talks, student-led discussions, study groups, painting demonstrations, and museum visits. In short: Something for pretty much everyone. 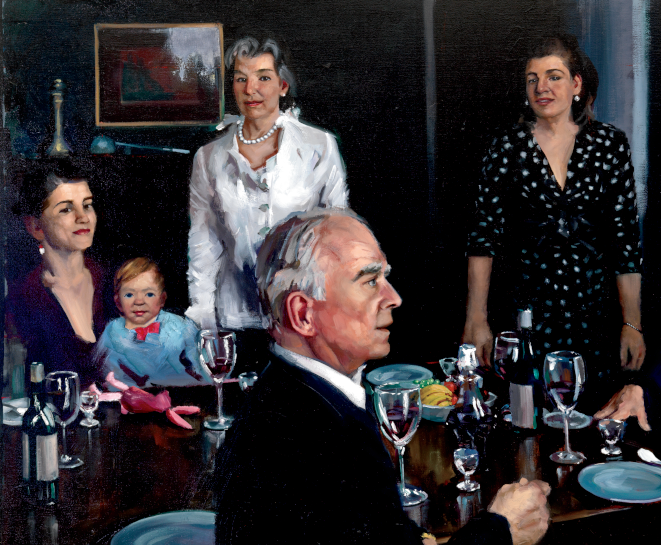 Portrait Commission of an Irish Family

Scott and Ann’s strengths balance well. “Ann is such a people person,” says Scott. “She was educated at Christ’s College, Cambridge, studying Art History, before going to Italy to study painting. Her father was a diplomat, so she grew up all over the world— Paris, Baden-Baden, Brazil, Portugal. She really is the public face of our studio. But if you have a technical question, or questions about sculpture, or art supplies from our London art shop, Lavender Hill Colours, I’m the one to speak to.”

Scott takes commissions for both portraits and sculptures. He considers the life-size sculpture he did of Australian entrepreneur Garrick Hawkins—which stands in Mayfield Gardens on the Hawkins family’s 160-acre private estate, to be among his best commissions. He says one of his most noteworthy paintings is the full-length life-size portrait he painted of Ann’s uncle, John Witheridge, former headmaster of Charter House School in Godalming, England.

Talking about his work, Pohlschmidt says he didn’t initially set out to become a sculptor, “But while I was in Florence, Charles Cecil added a sculpture department to his school and I just had to be a part of it. I just loved it, and never stopped. Not many painters sculpt, so it’s nice for me to be able to shift back and forth between the two.”

Polhschmidt sculpts with his students three times a week, “so I get a nice balance of teaching, working on my own things, and finishing commissioned work. I like all of it. A commission forces you to think and work in a different way. It’s more specific, but can also push you into a different area of creativity.”

Working with the students, he says, is also great. “It’s so important to know how to verbalize your working process to help them learn.”

Pohlschmidt’s interest in painting and drawing started when he was quite young. He still remembers when a third-grade teacher asked the class to draw pictures of their homes. “She was so shocked when I handed her a painting of my house done in perspective,” Scott laughs. “Everyone else drew facades, but I was always interested in structure, the underpinnings and shadings of things.” 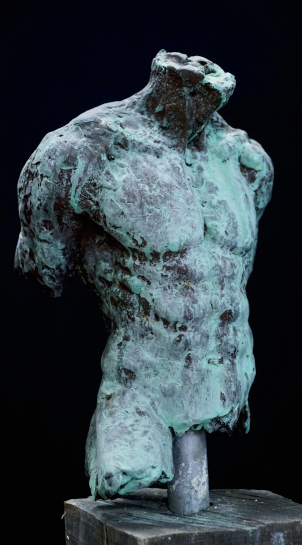 He also recalls the moment he decided he wanted to make a career of art. On a class trip to the Art Institute of Chicago, the teacher gave the students an hour at the end of the excursion to roam freely.

“I vividly remember finding my way to a painting by John Singer Sargent called, ‘Venetian Glass Workers,’ painted around 1880,” says Pohlschmidt. “I was completely blown away. Sargent’s pictorial, almost filmlike representation of these women threading beads. It was a glimpse of daily life, a genre painting made for no other reason than Sargent’s pure pleasure. Standing there I thought, “I would like to paint pictures like that.””

Today, he, Ann and the teachers and students at the London Fine Art Studios do just that, adhering to the traditions of figurative drawing, painting, and sculpting.

“I suppose in a way we are ambassadors for the figurative tradition,” sums Pohlschmidt. “There are so many art schools in London, but we get the students who want to learn representational art—to learn to in a systematic way about proportion, values, and painting techniques, working from life in a lively but controlled environment. I can’t tell you how many artists have come to us saying they wish they had had a year of cast drawing as part of their art school training. We give them that, and so much more.”

For more information, visit londonfineartstudios.com for information on classes and lavenderhillcolours.com for art supplies available online.