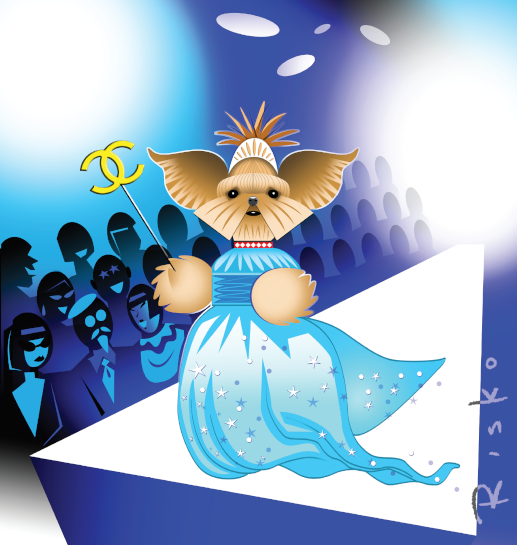 Barrington friends, did you know there is a celebrity living amongst us? Please meet Livie the Mork!

Liv is a hard-working pooch who has out-paw-formed all expectations. She is a paid social media influencer, advertising sensation, and has appeared in numerous commercials and television shows.

Liv’s life did not begin so glamorously. She is a survivor puppy, which is how she got her name, Liv. Liv’s owner brought her home, bottle fed her, nurtured, and cared for her from the moment she was born.

Like any new proud pet owner, Liv’s mom dressed her to the hilt and posted these incredibly adorable and fashionable photos on social media. This led to Liv’s first professional gig at only 10 weeks old.

But please make no mistake, Liv is not just another pretty puppy face.

Liv, who is half maltese and half yorkie, is a consummate professional. She has one hour of professional training every week and works for at least an hour a day on her training at home about five times a week. To date, Liv has over 100 tricks she performs on command. Some of the standouts are her ability to sneeze on command, wave to her fans, and cross her paws back and forth. Liv is definitely a photographer’s favorite for her ability to not only strike a pose but also to hold it!

All of this hard work has resulted in a busy and successful professional career. Liv’s credits are overflowing with print and billboard advertising, fashion shows, live events, trade shows, commercials, and TV shows. Liv also has a published children’s book series, her first book is Liv: A CBB Girl.

Prior to the pandemic, Liv was traveling up to six times a month for her various jobs. And even during the pandemic, she was still landing big accounts, including Target, Purina, Natural Balance, and Sleepypod. In fact, Liv will be the feature face on Purina’s new packaging launch. Liv has appeared in Elle, Harper’s Bazaar, and Vogue, just to name a few publications. She has also appeared on numerous television shows including Most Expensivest with 2Chainz, People TV, E News, and World’s Most Amazing Dogs. And if all of that isn’t impressive enough, she is the star of a new show about to launch on Amazon and Netflix.

She has over 200,000 followers across all of her social media platforms, including over 120,000 on Instagram alone. Liv has appeared in both New York Fashion Week and LA Fashion Week 13 times. But recently, Liv turned down invitations to participate in both of those events. Her health and wellbeing are top priority and it was time for Liv to have a bit of a break. Luckily for Liv, her mom-ager is always on the lookout for her best interest. She is well aware that Liv literally doesn’t have a voice and she needs to be her advocate.