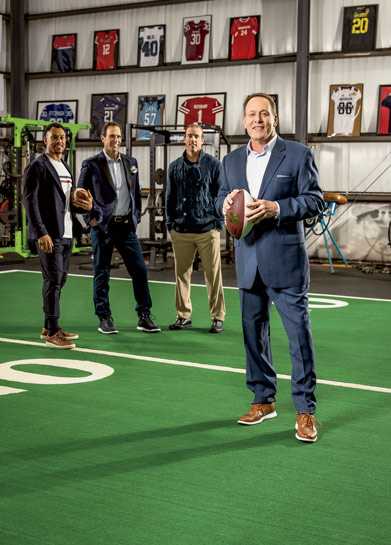 But he’s been the prolific signal-caller— the executive director, actually—for both the NFL Players Association, Former Players (Chicago Chapter), and the group’s charitable arm, the Retired Professional Football Players of Chicago (RPFPC), since 2014.

The main function of the NFL Players Association, Former Players—with Chicago one of 33 chapters nationwide—is to serve as a support system for former players and help them transition to life after football. 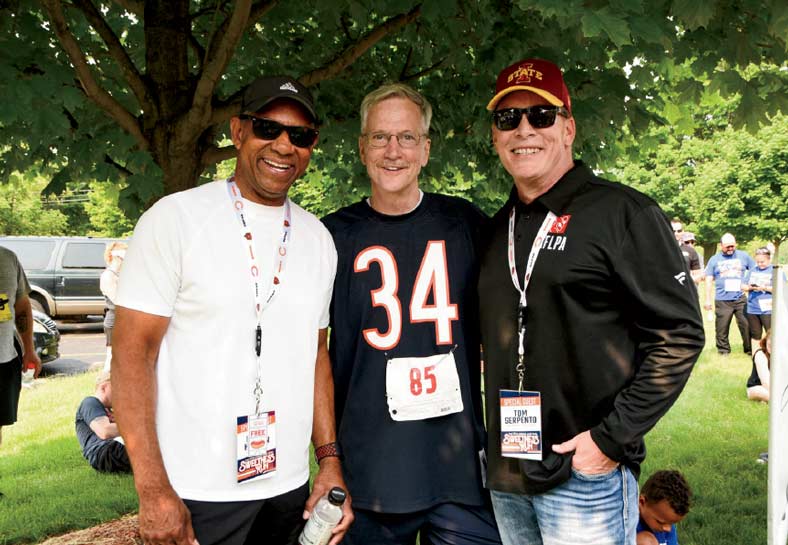 Meanwhile RPFPC, founded in 2003, is comprised of former professional football players who work voluntarily to support Chicagoland causes and charities. It primarily aims to raise funds for its Academic Scholarship Program (annual awards of $12,000 for one high school male and one high school female) and Football Equipment Grant Program for local youth in underserved communities.

“Nothing is more important than the life of a child, and one of the most rewarding sights for me is seeing young football players warm up a place with their smiles and happiness,” says the 58-year-old Serpento from his Hoffman Estates residence. 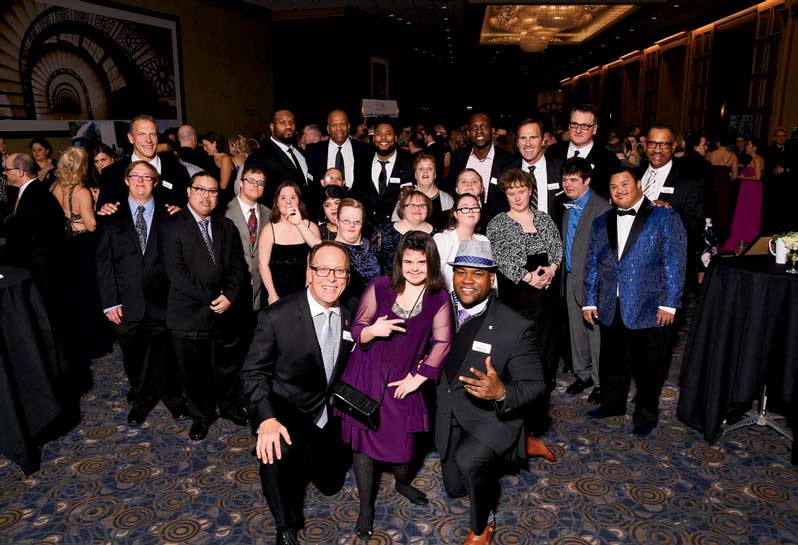 “I’m one person on a board of 12,” adds the acting president and CEO of T-Squared Builders, LLC, a full-service construction and general contracting company that has served Barrington and surrounding communities for 20 years. “My job is to drive the charitable outreach of our wonderful organization from the idea stage to the action stage. I love what I do. My life is full. The game of football and the many life lessons embodied within it are woven into the very fabric of my existence. Its been that way for as long as I can remember dating back to my youth in Des Moines. And I found that part of life again, at another level, through my affiliation with the Chicago Chapter of the NFL Players Association, Former Players.”

Serpento’s first hero was an Iowa youth football legend who happened to double as his dad. For nearly forty years, Bernie Serpento’s dedication and leadership invigorated and inspired tens of thousands of young gridders in the Des Moines-based Little All-American Football League from 1961 to 1997 where he served as league director. The twenty-three-year veteran lieutenant colonel in the U.S. Air Force and Little All-American Football League Hall of Famer died in 2004. 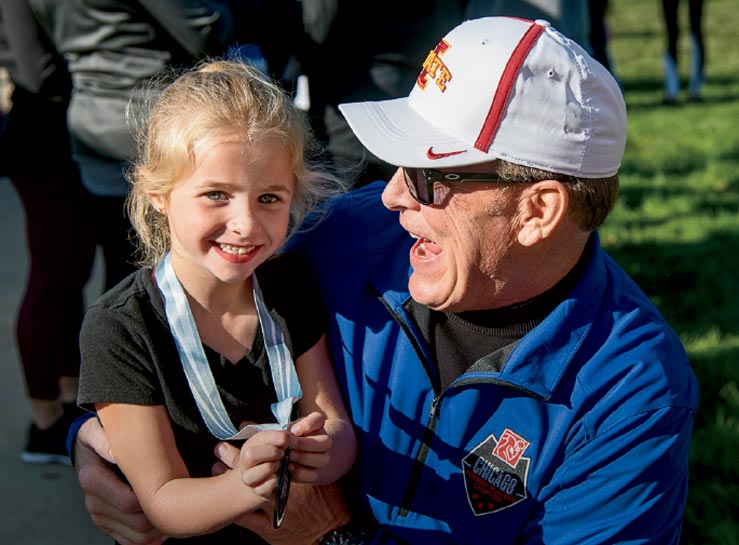 “I was fortunate to have inherited all of my father’s best traits,” the humble and grateful Serpento says. “He was a self-made man, with sound organizational and management skills. His work ethic, it was phenomenal.”

So how in the world did Serpento, this proud former Iowa State University Cyclone, find himself in huddles with ex-NFL players as a high-ranking executive of an NFL Players Association Chicago Chapter? Easy. He’s been fast friends with former Chicago Bears Brent Novoselsky, Bruce Herron, and Emery Moorehead, among dozens of other retirees from around the NFL, for decades. Novoselsky—a Niles North High School and University of Pennsylvania graduate—played tight end for the Minnesota Vikings from 1989-1994 after his lone season with Chicago in 1988. Novoselsky, 54, calls Buffalo Grove home today. 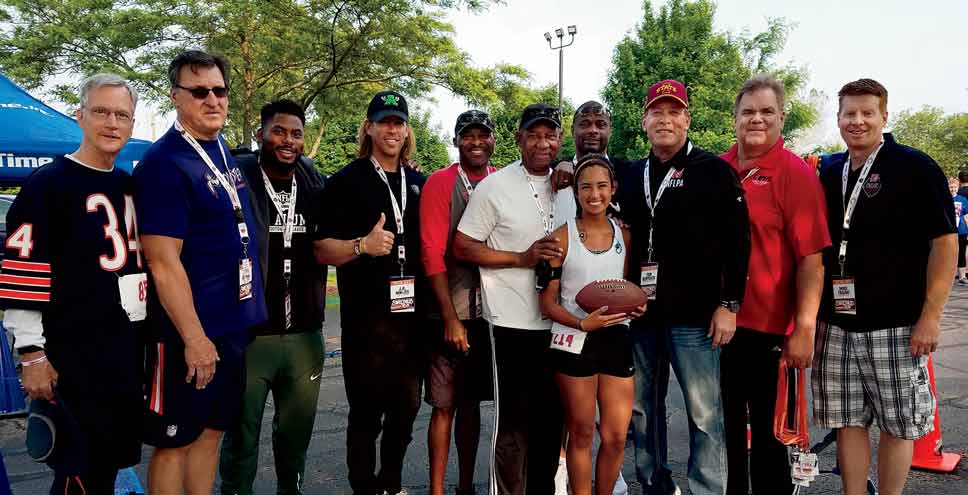 There might not be a tighter friendship in the northwest suburbs than the Serpento-Novoselsky bond. They first met at a Lake Zurich youth football camp in 1996. The camp needed a quarterback coach. Camp co-organizer Mike Scully, a former University of Illinois and Washington Football Team center, knew that Serpento used to throw zippy spirals for Dowling Catholic High School in Des Moines. Serpento showed up at the Lake County camp, ready to teach and chuck pigskins hard.

Novoselsky’s fingers survived his warm-up session with Serpento on day one of the camp. Barely. 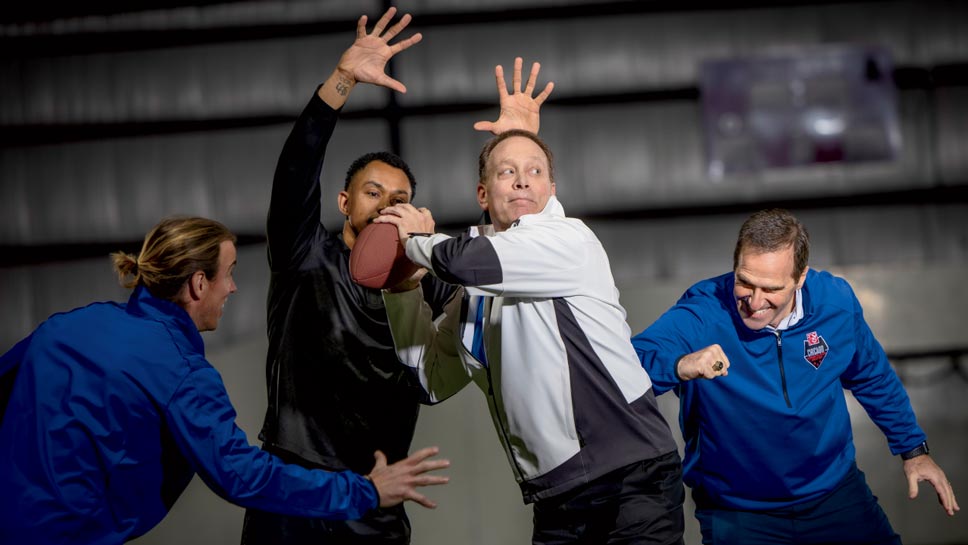 “Tom has no touch. He can throw a ball through a building,” cracks Novoselsky, a former Chicago Chapter president of the NFL Players Association, Former Players. “He’s intense. Tom and our organization’s charitable arm—it’s the perfect match. It’s not an easy job, being our executive director, because it often requires corralling a lot of kittens. But Tom is always up for it. Tom is not bashful, which is awesome, and he cares about people, cares about doing what he can to make young lives better.”

Owen Prunskis, a 2011 Barrington High School graduate, earned one of RPFPC’s $12,000 academic scholarships. He needed only four years to complete an undergraduate program and the MBA program at … Harvard University. 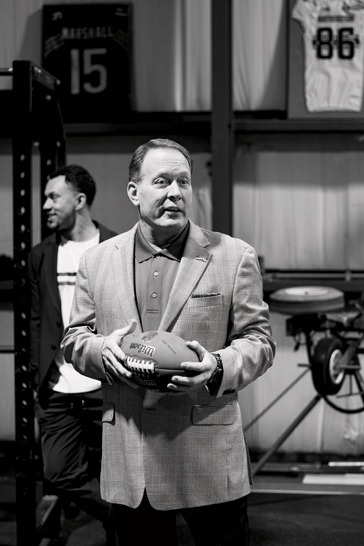 The RPFPC partners with companies to provide new and safer equipment as part of its Youth Football Grant Program. Wilson Sporting Goods, for example, donated a combined 60 footballs and 150 mouth guards and helmet chin straps to the three most recent RPFPC grant recipients.

“Youth football has improved and, in some cases, saved lives,” Novoselsky says. “Tom knows that better than anyone, given what he witnessed as his father helped all those football kids develop in Iowa. A lot of these kids in the Chicago area are growing up in rough neighborhoods, without a father figure in their lives. They become a part of a team and suddenly they have good friends, brothers for life. Being associated with a team opens doors for many of them.”

Several years ago Serpento and his RPFPC crew made a difference off the gridiron, collaborating with the Barrington Junior Women’s Club to pitch in for the fundraising efforts of the Freddie Herriman Pederson Splashpad at the Barrington Park District. It’s an Americans with Disability Act (ADA)-accessible water spray ground for all children. 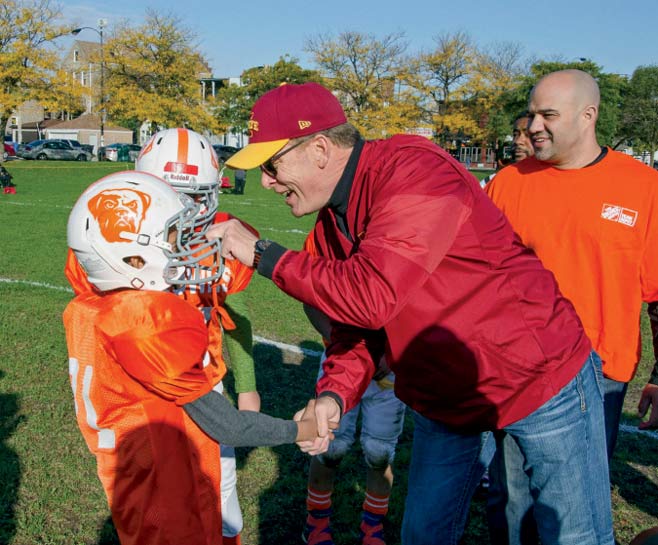 “Tom reached out to us in the year we were celebrating our club’s 80th anniversary,” says Erin Shechtman, a Barrington Junior Woman’s Club past president. “I remember him saying, ‘We need to do something for the community.’ He’s such an energetic man, with a contagious personality and a big heart. We’re grateful we have someone in our community with as much enthusiasm and positivity as Tom has.”

Doing something run-of-the-mill, in any arena, is foreign to Serpento. The man is a lector at St. Anne Catholic Community in Barrington. But he doesn’t simply read scripture to parishioners on any given Sunday; he spends hours memorizing every word in each passage during the workweek. Then he stands before the congregation, his eyes scanning scores of others, and delivers the lesson using his booming, movie-trailer voice.

“There’s not a day I get out of bed without having a purpose,” Serpento says.

For more information about the Retired Professional Football Players of Chicago, visit rpfpc.com.