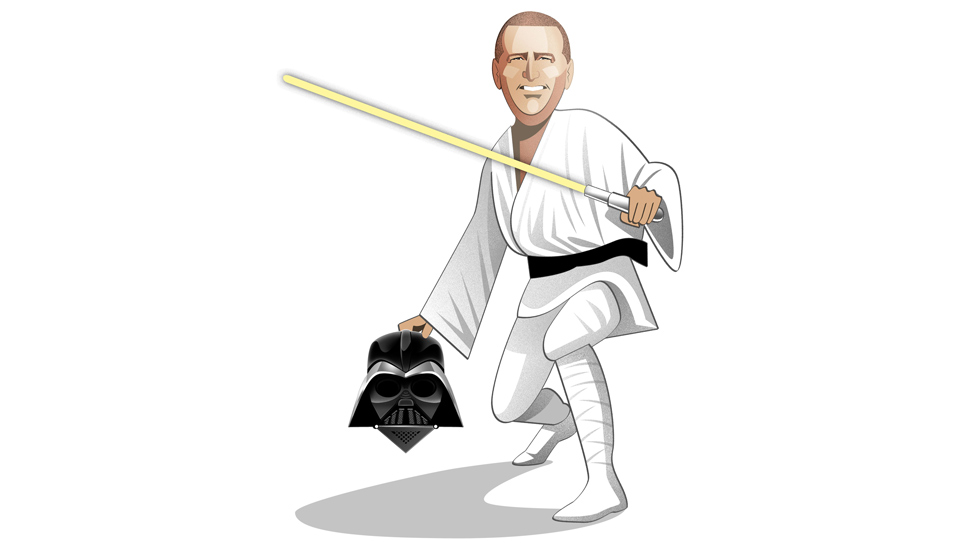 The wide eyes of the forever-fifth-grader in Dr. Ken Hyllberg never blink. Neither do the array of items depicting characters from his favorite movie franchise, Star Wars, that adorn his office— the Principal’s office—at Arnett C. Lines Elementary School in Barrington.

“I will be 50 in December, although I feel and look much older,” says Hyllberg, Lines’ principal since 2015. “But people who know me know that I act much younger, so hopefully it all evens out.”

It pains him that Lines’ students started the 2020-21 school year like it ended the 2019-20 school year: as Distance Learning pupils because of ongoing concerns related to the pandemic. But he understands it’s the critical first leg of Barrington School District 220’s Board of Education “Roadmap to Reopening,” and the decision was based on the guidance from the Illinois State Board of Education, the Illinois Department of Public Health, and the Centers for Disease Control.

In mid-August, District 220 planned to remain in Distance Learning mode until at least October 16. Hyllberg misses seeing the students’ infectious smiles in the hallways, as well as reading to them in classrooms and quizzing them on the names of the ageless Star Wars figures in his office.

Yes, absolutely. When we went to Distance Learning in March, no one had ever dealt with anything like this before, and we had no idea it would last the rest of the school year. We were basically learning by doing. I think of that time as building a plane as we were flying it. This time around we have time to collaborate with multiple stakeholders and be much more proactive instead of reactive. So now we’re flying the plane after it was built.

Where will Lines’ teachers teach?

They’ll be on-site daily, instead of at home, instructing our students from their classrooms with full access to all of our outstanding resources and instructional technologies. This time around there will be five hours of daily instruction via a mixture of synchronous and asynchronous teaching.

Your advice to the parents of your students?

Stay positive and keep things in perspective, and continue to partner with us so we can best meet our students’ needs together.

You started your career in education in 1993, teaching third-, fourth-, and sixth-graders in Racine, Wisconsin. Describe your style of teaching.

I was always myself, and I always had a sense of humor. My classroom was a happy place that focused on learning and always trying to do our best at everything we did. I also worked tirelessly at building authentic relationships with every student.

Lead with a positive attitude that is always child-centered. I try to be a good listener and flexible. I try to hire the right people, empower them to do their job, and give them the space and support to do that. I’m still learning. No one has to go through this [pandemic], or anything else, alone. I rely on my staff as much, if not more, than it relies on me. The other thing I’ve learned about leadership is that I don’t always have to know everything … that getting humbled isn’t a bad thing.

The No. 1 reason you chose to pursue a career in education?

I’ve always loved working with, and helping, kids. I love being able to instill the love of learning in my students by my actions and my words. Although I have been a principal for 16 years, I am still a teacher. Instead of having 25 student in my class, I am blessed with having 465 students.

It is going to be awesome and should be finished by Labor Day. I’ll encourage parents to take our students there often.

Why all the Star Wars stuff in your work space?

I’m just a huge Star Wars fan, so I enjoy talking about my collection with the students. Who doesn’t like Star Wars? It’s a great way to connect with kids. And my wife, Marcy, doesn’t want any of it in the house, but that’s beside the point.

Your favorite Star Wars character? And why?

Luke Skywalker, because he always believed there was good in people. Not giving up on his father was a great example of the power of the love.

Rumor has it that you bleed Chicago Cubs blue and could probably recite the middle names of all Cubs players since you first soiled your first Wrigley Field bib. Where were you when the Cubs finally won the World Series in 2016?

I was standing in my family room with my family. When we got the last out, I had tears of joy, and all my neighbors heard me celebrate; you probably heard me, too. I kept thinking of my grandparents, who were monster Cubs fans. I enjoyed the win for them; they would have been so thrilled. I stayed up all night watching highlights on every channel I could find.

We hear you regularly crave crispy bacon. What goes well with the strips?

Another side of bacon!