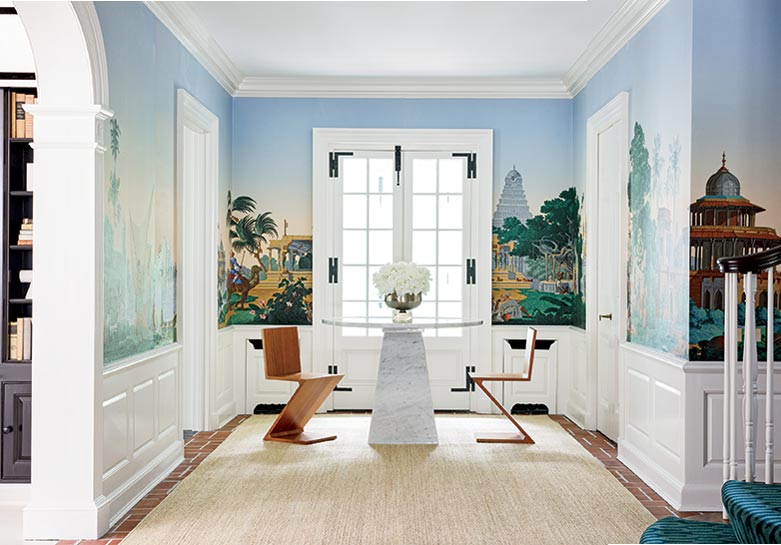 Anderson had already made myriad contributions to the visual character of Lake Forest throughout his career— think the concrete post and lantern style streetlight designs throughout the city and the design of Lake Forest High School— and his turn-of-the-century architecture helped later inspire the world class gardens on the property by New York landscape architect Annette Hoyt Flanders, who worked with Pullman in 1937.

An avid gardener and co-founder of the Chicago Botanic Garden, Pullman planted Ginkgo trees, rare Chinese maples, Japanese lilacs, and boxwood hedges, many of which still exist today. Both the interior and exterior designs have stood the test of time so, when the Lake Forest Auxiliary Chapter of the Infant Welfare Society of Chicago named the home for its 2020 Showhouse & Gardens, participating designers were tasked with honoring the heritage and character of the house for a modern audience.

This year, almost 40 interior and landscape designers, including honorary chair Paloma Contreras, transformed the 23 room, 11,000-square-foot East Lake Forest Pullman property into a show stopping tribute to the latest in design and décor.

Guests enter through the historic foyer, where interior designer Natalie Konstant decorated around an existing Zuber wallcovering. “Zuber had such an impact on traditional French design,” says Konstant. “I ended up studying and researching designs of the French modernist era and what started as a design ‘constraint’ ended up inspiring the entire aesthetic.”

She conceptualized a contemporary entry sideboard to play with the traditional setting and also added sculptural pieces, like The Fertility Idol by Material Think Space cast in Italian Bardiglio marble and a Venus de Milo cast amber resin sculpture set atop an ebony stained wood pedestal.

“A thoughtful integration of the interiors and architecture is what ultimately creates the most impactful spaces,” explains Konstant. 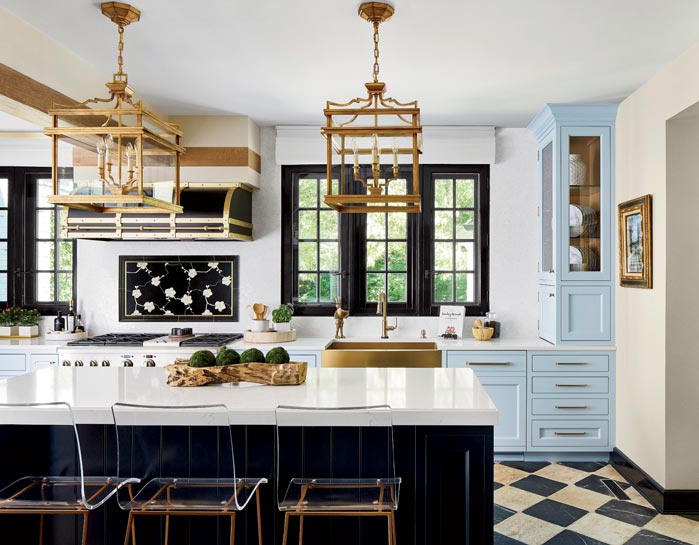 Kitchen by The ABL Group and Dovetail Cabinetry. Photography by Ryan McDonald

George Markoutsas of The ABL Group also took inspiration from the Zuber wallcovering in the house’s kitchen design.

“We coalesced the seemingly Persian iconography of the wallpaper—with its curvilinear natural elements juxtaposed with sharp clean lines—into our design to create a sense of harmony within the home,” says Markoutsas. “When we enter a space, we want our designs to feel as organic as possible.”

Markoutsas and his team worked with the travertine checkerboard flooring and wood beams original to the home, adding a reclaimed barnwood butcher block by Lake County Barnwood to the island with an antique sewing base, Amish-made cabinetry by Dovetails Cabinetry, and a food-safe quartz countertop by Cambria.

Hidden within the traditional styling are modern upgrades, like a Smart Home Automation System by Great Home Technologies and a vacuum by Hafele built-into the cabinetry. “We are firm believers that form follows function, especially in kitchens,” notes Markoutsas. 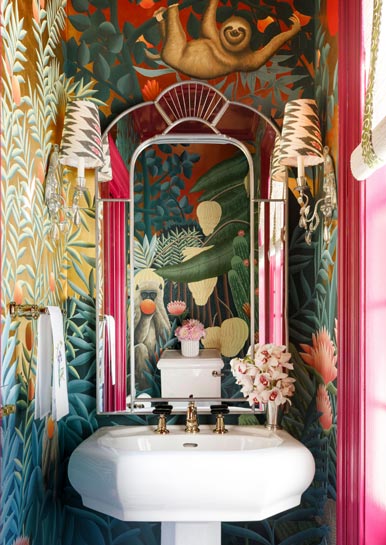 Off the foyer, designer Sarah Vaile created a powder room jewel box with a color palette—Sherwin Williams Framboise—inspired by the burgundy Rolls Royce driven by Princess Margaret in The Crown. In fact, Princess Margaret served as the muse for the entire space.

“We loved the idea of playing up a vestige of proper homes of the past. The cloakroom off of the powder room is where we imagined guests could congregate in small groups for a little mischievous conversation outside of the spotlight,” says Vaile.

“The DeGournay wall covering turned out to be quite a masterpiece,” says Vaile. “We meticulously placed every single animal in the space, our favorites being the monkey perched over the toilet eating an orange and a sloth playfully suspended over the mirror.” 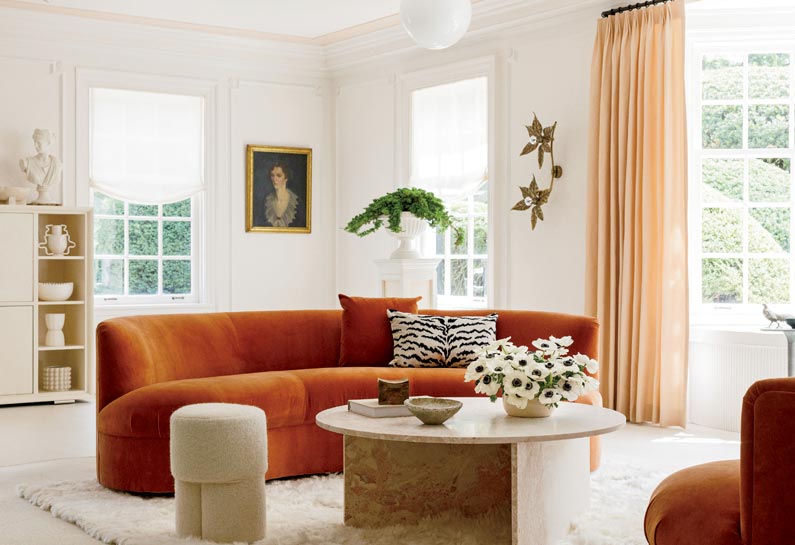 “We contrasted soft tones and layered textures against bold color,” says Hurliman. “What makes a space feel interesting and truly unique are the pieces that no one else has.”

Something most people do not yet have but will definitely covet is a potting room like the one by JamesThomas. The team paired black Venetian plaster on the walls with verdant green trim and faux oak-painted cabinetry and beams to create a layered, textured, and rich space to arrange flowers, transplant plants, create topiaries, and more.

“We loved the idea of a historic English manor house and the outbuildings that an estate like that would have,” says James Dolenc. “With COVID, people are gardening and landscaping more than ever. Everyone wants to be outside enjoying nature but in the comfort of your own space. Who wouldn’t want a little nook dedicated to horticulture?” 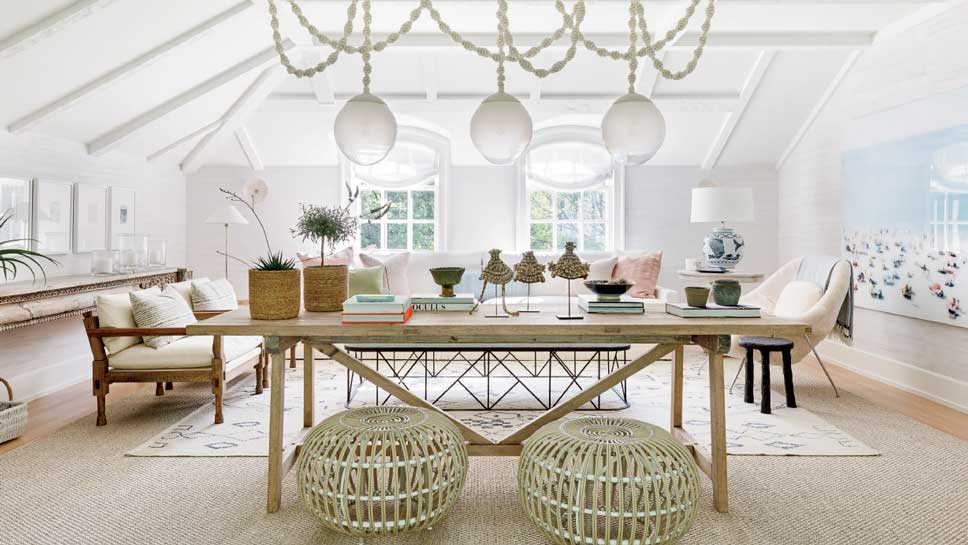 Although not initially planned this way, the women’s retreat by Andrea Goldman Design is perhaps another response to COVID and is Goldman’s answer to decades of man caves, libraries, dens, and converted garages.

“This space functions as an epicenter for a woman’s life in her home,” says Goldman. “A serene retreat space feels incredibly necessary now that people are staying at home, and the space is versatile. It can be used for a game night, relaxing and reading, or morning coffee on the terrace.” 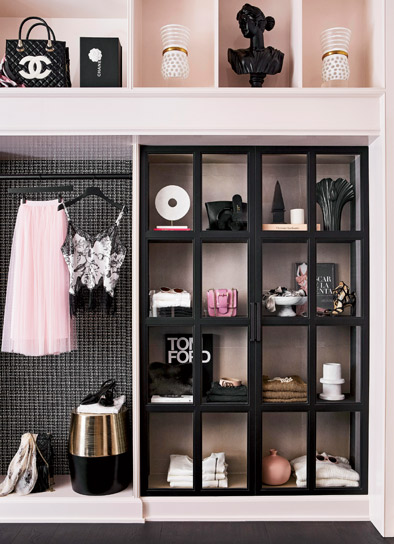 Two other female-centric spaces within the home include the master closet by Ilene Chase Design, gilded in shades of black, pink, and gold, and the home office by North Shore Nest with a standout floral Schumacher wallpaper.

Chase’s inspiration for the closet space was curated during her travels to Paris for Deco Off 2020. During her trip, she was surrounded by design, fashion, and the best of textiles, and was so in her element that creative visions were bursting at the seams. She could hardly wait to implement all of her finds into the closet design. 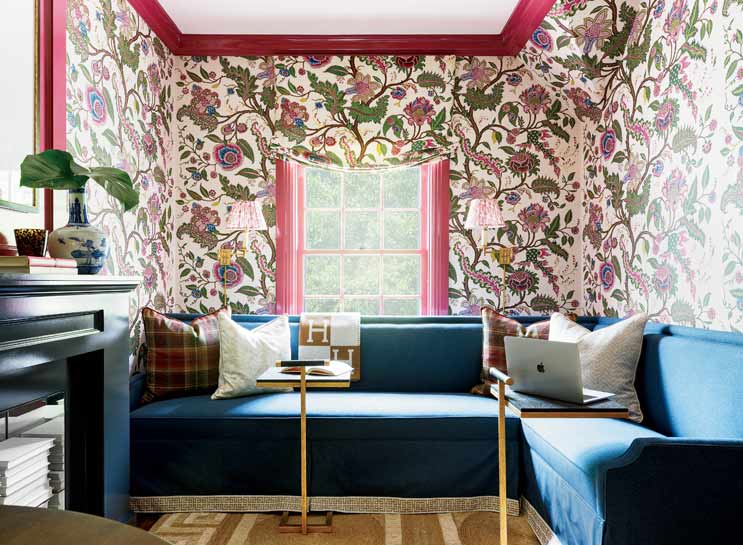 In the home office, Katie McFarlan balanced the palette with deep berries, charcoals, and blues. “The true inspiration for the room was the modern working mom or household CEO,” says McFarlan. To elevate the cozy den, the North Shore Nest team added a faux fireplace, berry-painted moldings, and created a closet-turned-bookshelf.

“Transforming this room into a woman’s space resonated with us as working moms because we know the struggle,” says McFarlan. “The banquette seating provides additional areas for working or relaxing, and we loved the idea of doing a ‘partner’s table’ instead of a typical desk.”

Ultimately, the 2020 Showhouse proved that there really is no place like home.