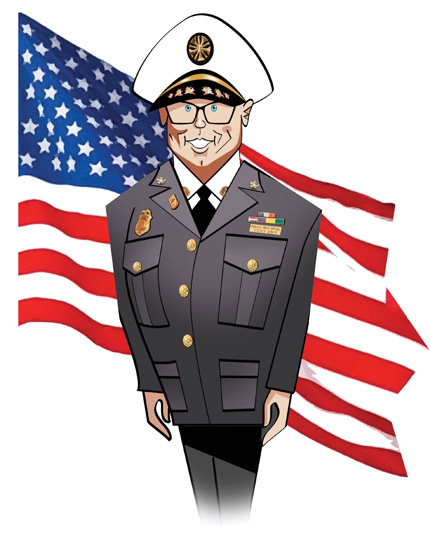 As a kid growing up in Grayslake, John Christian remembers the rush of a siren’s call, and watching the volunteer firefighters in his community spring into action to save lives and property.

“I was always enamored with firefighters and had a neighbor who was on the department,” says Christian, who was hired as the new Fire Chief in the Village of Barrington in early July, after an extensive search. “I can remember him responding to calls when the siren was activated in town to notify the firefighters of a call.”

While he doesn’t recall the rite of passage boyhood memory of riding on a fire truck, he does recall going to the local fire station for special events and the annual open house. “I never rode on a fire truck, but it was always a thrill to see the fire engines responding to an emergency,” he says. “My heart would always race watching them in action.”

When he started his college studies to pursue a business management degree, the idea of becoming a fireman never crossed his mind.

“My original plan was to finish college and become an accountant like my father,” says Christian, who recently moved to Barrington Hills with his fiancée, Trisha. “It was not until the first day I walked in the fire station to apply that I knew this was the only thing I wanted to do as a career.”

He has two grown sons, Lucas and Alec, who were raised in nearby Gurnee. Christian says he’s looking forward to putting down roots in the Barrington area and building a new life here.

“Barrington is a tremendous village with so many opportunities. In completing my research, there are so many positive attributes which include the professional and dedicated staff in the Village,” he says. “From the minute the opportunity arose, I had no question that I wanted to be part of it. I feel like I have won the lottery being able to serve as the Fire Chief in Barrington.”

If you review Christian’s credentials, you might agree the Village got lucky too.

The Chief brings more than 30 years of fire service experience, which began in Grayslake—where he paid his dues as a firefighter/paramedic in 1987 and became that community’s fire chief in 2009. He also served with the Beach Park Fire Protection District as part-time Deputy Chief from 2004 to 2009.

Christian is also a past president of the Illinois Fire Chiefs Association and is a veteran of the Illinois Army National Guard 1/131st Infantry (where he was honorably discharged as a sergeant in 1994). He is also an adjunct faculty at the College of Lake County, teaching fire service and business operations along with emergency management courses.

Both Village Manager Scott Anderson and Village President Karen Darch have welcomed him with open arms.

As for Chief Christian, he says he’s just glad to be here.

“I enjoy many aspects of the job …. Including working with likeminded professionals, interacting with the public, and responding to emergency calls,” says Christian. “Every day is different which makes this job very exciting.”

He hasn’t lived in Barrington long enough to have a “favorite thing,” but he’s loving what he sees, so far.

“Everyone has been very welcoming, and I am enjoying getting out and meeting folks daily,” he adds. “I look forward to getting more involved in civic activities moving forward. Having such talented and dedicated firefighter/paramedics makes my job very rewarding.”